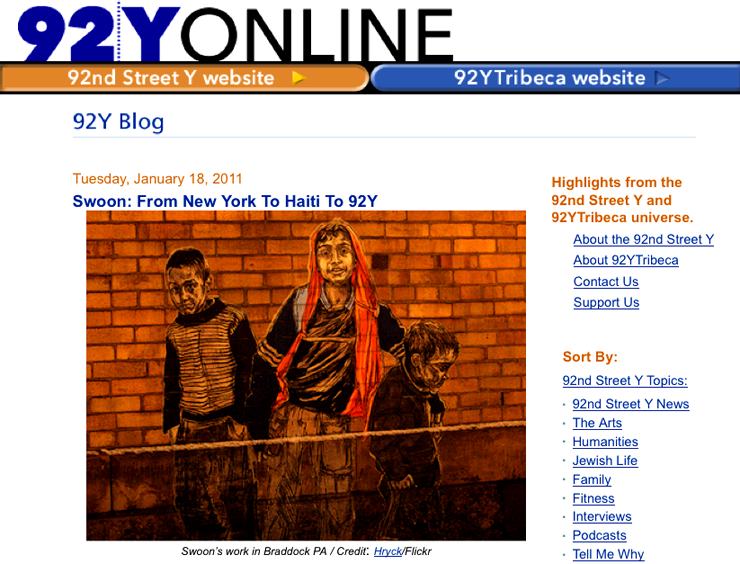 In 2010, Brooklyn-based street artist Swoon traveled to Haiti as part of the Creative Time Global Residency Program and worked with communities in Port au Prince and Bigones to rebuild housing and community structures after the devastating earthquake last year.  Hyperallergic reported on the the project’s recent inauguration in Haiti:

The project is a rebuilding initiative, which “uses dome-style structures and the super-adobe technique of earth bag architecture to create sustainable, inexpensive and dependable housing for the people of Haiti. While the structures are extremely resistant to natural disasters, they also have the major benefit of being comprised of 90% earth and requiring no specialized scaffolding and understructure to build — making it a viable option for the people of Haiti to continue building on their own once they learn the method.”

Swoon was one of six New York-based artists—along with Sanford Biggers, K8 Hardy, Emily Jacir, Maya Lin and Walid Raad—given the opportunity “to get off the race track” that is life in New York City and focus on their work in another part of the world. Maya Lin researched mass extinctions while visiting Ecuador, Egypt, and China, Walid Raad traveled to Beirut, Sanford Biggers visited Brazil to work with video; K8 Hardy made stops in Chile, Mexico, Brazil and Argentina to investigate fringe queer culture and Emily Jacir investigated activism in Italy.

This Thursday, January 20, all six artists will come to 92nd Street Y to share the stories, findings and lessons from their time abroad.

Click on the link below to read Brooklyn Street Art Studio Visit and Interview with Swoon on The Huffington Post: