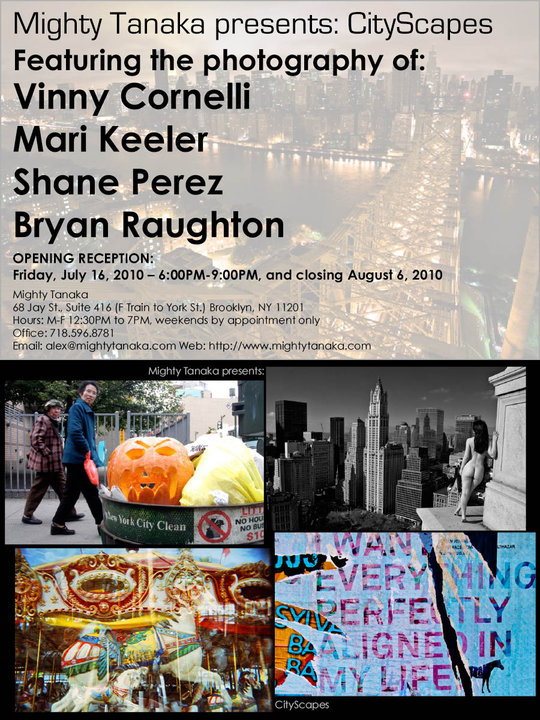 Mighty Tanaka is excited to present our next show entitled CityScapes, a four person photography show that delves into and documents a variety of perspectives in and around NYC.  Featuring the work of Vinny Cornelli, Mari Keeler, Shane Perez & Bryan Raughton, each photographer individually deciphers their own unique interpretation of the City through a myriad of techniques and inspirations.

CityScapes invites the visitor to explore the seemingly ubiquitous and familiar environments of New York City through the eyes of the photographers, as they excavate new vantage points through their exceptional observations.  From grand panoramas to the subtle details, the show looks to provide the viewer with an in depth examination of the urban environment that most people are likely to overlook.

From multiple exposure photography and models posing in precarious locations to textured urban environments and the grimy gems of the City, this New Century art exhibition aims to uncover the hidden treasures constantly found on the streets of NYC and fuse them within our daily lives.

"Bring To Light" Brings to Life
Brooklyn Does "Nuit Blanche" Talking with the Producer and One of the Organizers of New York's First In New York there aren’t many venues where both the artists and the public get to mingle and talk...
Hellbent, Abstractions and "The Mixtape Series" in NYC
In-Studio Visit With the Guy Who Took His Street Name from Richard Hell "Even Romantics Love Violence", Hellbent's first solo gallery show unveils the graffiti / Street Artist doing a new collection ...
BSA Images Of The Week: 11.30.14
Here's our weekly interview with the street, this week featuring Aiko, City Kitty, Clet, Dain, Deekers, JB Rock, KCIN, LUC, Mr. One Teas, Obey, Peros, PX$H6XD, Shepard Fairey, Smells, Specter, T...
Icy & Sot: International "Last Supper" & Almighty Dollar in Coney Island
“In this piece they are all figures from different currencies – like from Iran, Korea, China, England, the US, Pakistan…,” says Sot of the new one layer stencil they are preparing for Jeffrey Deitch’s...
Images of The Week 11.14.10 : Dude Company Special
Our weekly interview with the street narrows this week to show you photos of a visit to Brooklyn from French Street Artist "The Dude Company" and a cool shot of Lister at the end. A glorious autumn d...
Brooklyn Bryan Raughton Dumbo Mari Keeler Mighty Tanaka Shane Perez Vinny Cornelly