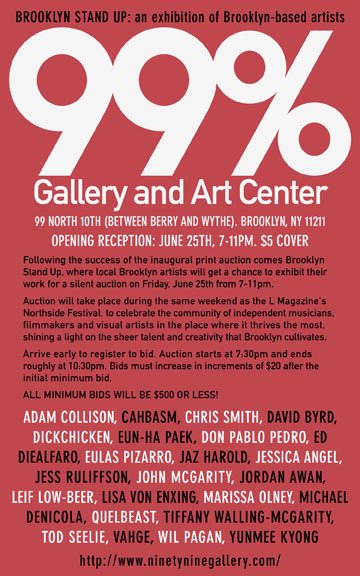 Following the success of the inaugural print auction here at 99% Gallery (where almost 500 were in attendance) comes Brooklyn Stand Up, where local Brooklyn artists will get a chance to exhibit their work for a silent auction on Friday, June 25th from 7-11pm.

This show will take place during the same weekend as the L Magazine’s Northside Festival, allowing the maximum exposure for the artists exhibiting their work. The goal of the Northside Festival is to celebrate the community of independent musicians, filmmakers and visual artists in the place where it thrives the most, shining a light on the sheer talent and creativity that Brooklyn cultivates.

Please arrive early to register to bid on items in the auction. Auction starts at 7:30pm and ends roughly at 10:30pm. Bids must increase in increments of $20 after the initial minimum bid has been placed.

Afterparty starts immediately following the auction (RIGHT AROUND THE CORNER FROM THE GALLERY) at The Counting Room, located at 44 Berry Street (on the corner of North11th).