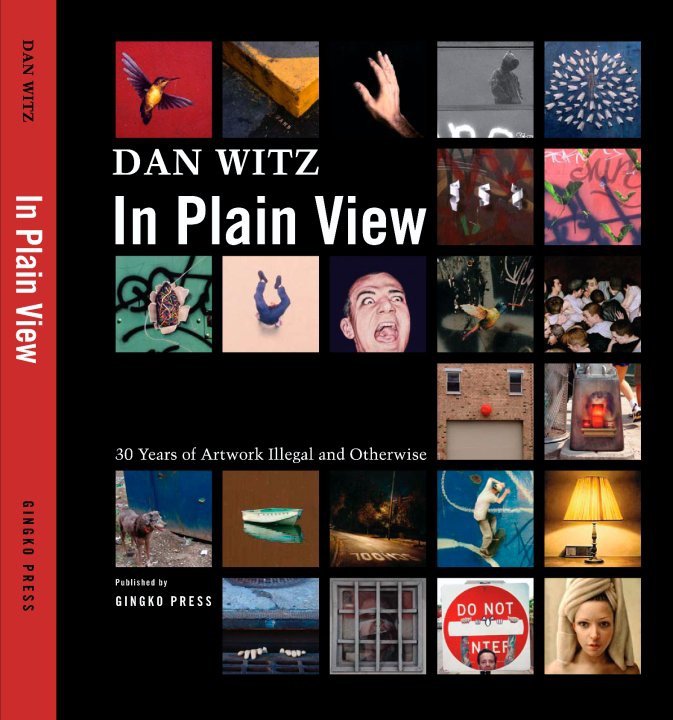 Dan Witz: “In Plain View” — 30 Years of Artworks Illegal
and Otherwise is the first and long overdue monograph
on the work of Dan Witz. A benefit of having one of the
most sustained careers in street art, if such a thing exists, is the degree of growth, freedom and experimentation that such an extended period allows. Another advantage would be the influence of the aesthetic environs within the changing cultural landscape, especially if you happen to work in New York City.
From the no-wave and DIY movements of New York’s Lower East Side of the 70’s, through the Reaganomics of the 80’s to the flourishing of graffiti art in the new millennium. Whether stickers or paste-up silk-screened posters, conceptual pranks and interventions, or beautiful tromp l’oeil paintings, the medium is inspired as much by the nature and subject of his art as by the mutating urban conditions in which the piece is executed.
– Hide quoted text –
Besides obvious craftsmanship, the artwork of Dan Witz evinces a rigorous conceptual framework. This framework not only opens up a dialogue with graffiti and street art which dominate the urban environment, but also allows for the retention of clear and open lines with the canon of art history.

BSA Images Of The Week: 09.14.14
The street appears in the living room when you visit some artists homes or those of hard core collectors. "Brooklyn is in da house!" suddenly takes on additional meaning. So imagine rolling thro...
Lee Quinones : The NYC Graffiti Train Storyteller Tells His Own Story
Never Seen Notebook Drawings and Recent Paintings Span 1975-2015 “It was an identity crisis for youth in NYC in the 1970s,” explains Lee Quinones, the whole subway car “bomber” who claims the mantel ...
BSA Images Of The Week: 11.11.18
100 years since the end of World War I today. The US is engaged in 7 wars right now. Two facts to contemplate as the city takes a breath and regroups from another election cycle. Republicrats w...
Icy & Sot: International "Last Supper" & Almighty Dollar in Coney Island
“In this piece they are all figures from different currencies – like from Iran, Korea, China, England, the US, Pakistan…,” says Sot of the new one layer stencil they are preparing for Jeffrey Deitch’s...
BSA Images Of The Week: 02.26.17
Always good to get to Berlin to see what waves of text and pattern and outrage and snark and myriad metaphor are more-or-less relentlessly rippling across buildings and empty lots. The rippling ...
Brooklyn Dan Witz Ginko Press In Plain View Spoonbill and Sugartown Booksellers Street Art Williamsburg