Looking at a Modern Graff Travelogue Zine from the Rail Rider

You can’t get more personal than a zine – a hardcopy collection of stories, photos, drawings, writings, observations, screeds, poetry, meanderings all in one. The conventions vary from saddle stitched or creatively folded to the extreme of origamic configuration. It could be all fluorescent paper or have screened oaktag covers or be handmade paper with chunks of stuff floating around inside.  Usually printed and photocopied, it may be off your home computer or it may studiously avoid modern convenience and the dulling effects of automative production methods, perhaps with highly individualized pieces of art or detailing. 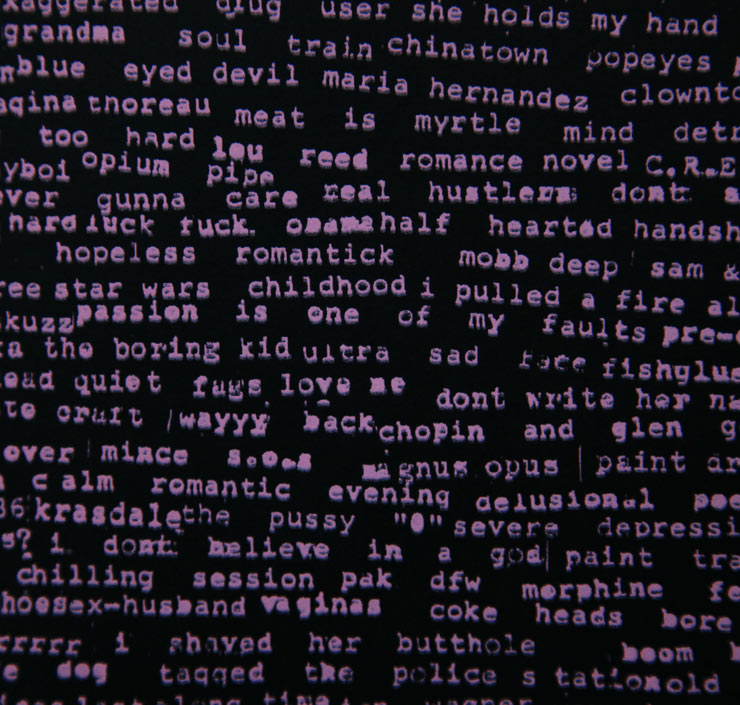 Detail of the cover from Droid (photo © Jaime Rojo)

We like the vehicle of the zine for its Luddite qualities, it’s air of hard won endeavor, hand manufactured and imperfect, and the graffiti zine as a category feels analog and authentic, even when it comes from a liar. If you want high-gloss and fancy concepts, go to the magazine store and marvel at the exotic/erotic spreads that have been art-directed into a sort of histrionic fun-house version of the world, but imagined by people with no roots and who can’t talk about anything. Pick up a graff zine and if you are lucky you’ll be challenged by it’s raw discontent and ravaging deconstruction of convention, possibly a bit of posing, and invariably enough rage to burn off a layer of conventional illusion. This is a generalization drunkly romantic, but we must aim high.

The New York graff writer Droid 907 has just released his new hand-held graff portfolio, Sex or Suicide: (you’re fucked either way) , a mainly black and white zine alternately jammed together (or carefully cobbled together, if you like) with shots from nice cameras, distorted phone shots, and others that were stored at the bottom of the sock drawer next to a tub of vaseline. Part of the 907 crew, this publisher and author gives you a romp through 20 pages that is earnest, disjointed and hard running, and you have an opportunity to balance on the handlebars while he drives, but he may take you into an oncoming truck. 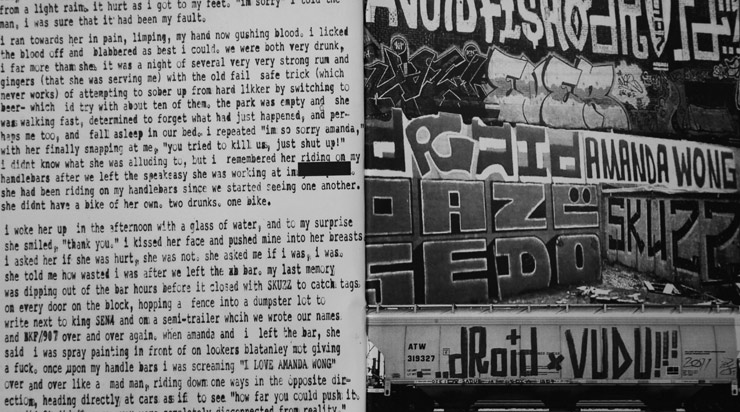 Something about the verbal and visual distortions, the roughshod collages, the on-the-run docushots of graff works made in hidden places underground and on tracks and roofs, the rambling and audacious text stung and burned with emotion and a vain attempt at ordering the chaos – is endearing. Despite his copping a feral stance and outlaw bravado, the zine writer/ graff writer gives S.O.S. the feeling of a good-humored graff travelogue with occasional special guest stars, but in reality he stays home a lot because he feels like nesting right now. It has skipping verbal shots and paeans to pop culture and drugs and sexual curiousity all slapped together with graff walls – splicing the prose and laundry lists and spilling them into a typewriter, his thoughts truncated and distrustful, jolting and jokering, ultimately swallowed by a swoon. 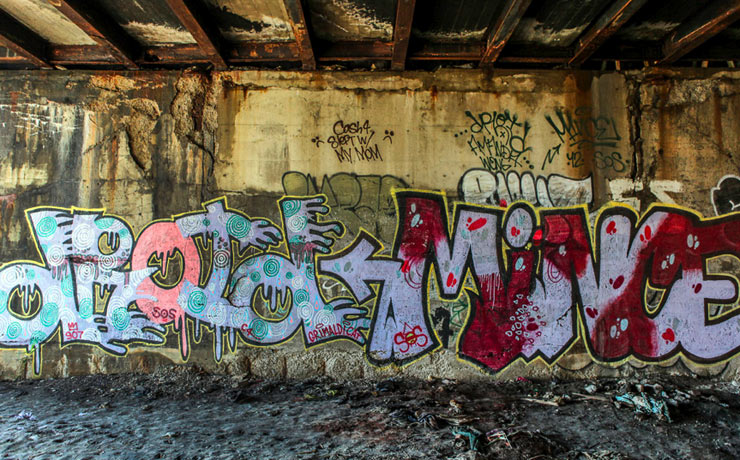 BSA had the opportunity to speak with the circumspect Droid, who says he is currently on the road and in homes, lurking the East Coast from Maine to the deep south this summer. He gave us some insight into this new zine venture, but only enough to keep you wondering. We a pretty good idea who he is in love with, and he asserts that homosexuals find him very attractive.

Brooklyn Street Art: Is this like a blog, except on paper? And does that question make you wretch?
Droid 907: I don’t consider the two to have much in common at all, no. At times they are both composed of words and images, but the analog vs. digital nature of the two make for a very different form of archiving/narrative experience, for both the author and reader. 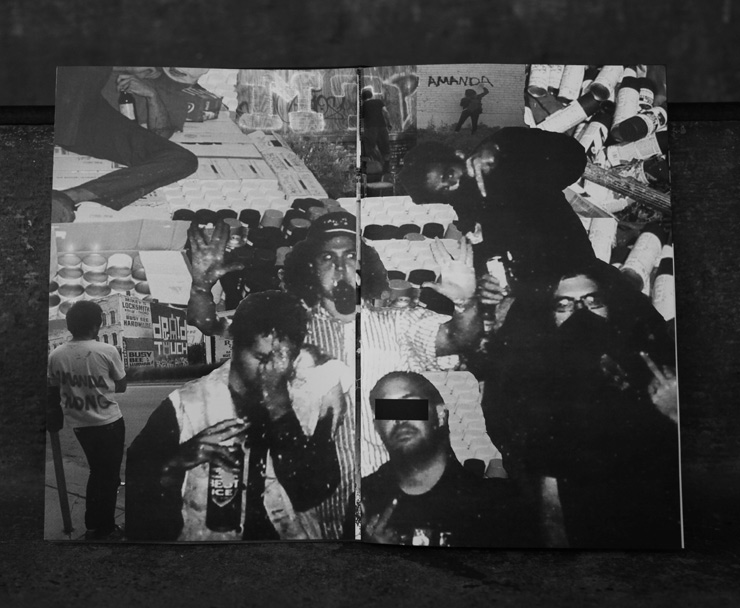 Brooklyn Street Art: Can you talk about the process for creating text and how it is treated as commodity or object? One can see a comparison sometimes to automatic writing and the cut-up methods of William Burroughs.
Droid 907: Most of the text came directly from unedited journal entries I produced on a typewriter I found in Detroit last summer. The “lists” came from documenting each “one liner” on every sticker I wrote. Literally, I have hundreds of pages documenting thousands of stickers from the last year or so. I Xeroxed the lists to cut up and make a bunch of collages, composing the cover of the book as well as some of the interior images.

I don’t create work with the idea of selling it. I make work with the intention of making art and archiving my work/ experience(s). In the past I have had friends pull off rack jobs at their schools or print shops and created all my previous zines for free. On this endeavor, I had to sell some copies to make back the initial cost of production. That didn’t change my approach, but it potentially raised the production value. That said, I’d just as easily go back to doing it on the cheap and/or free. 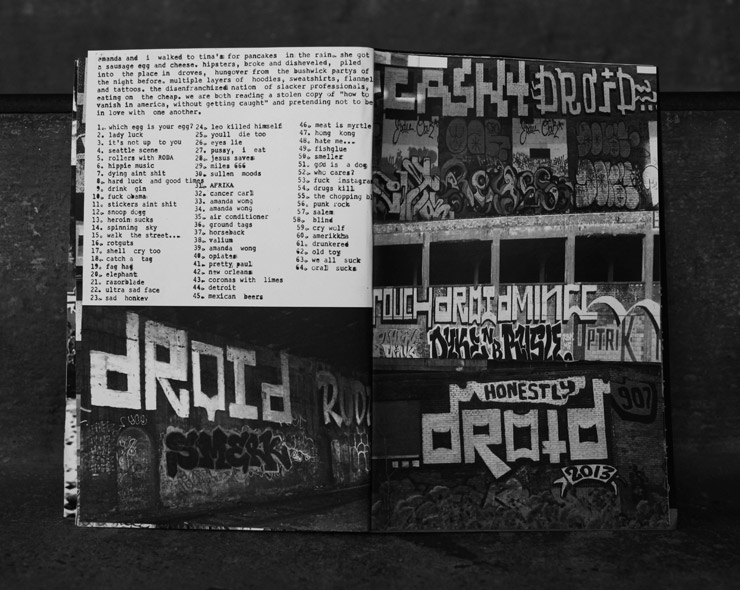 Brooklyn Street Art: How would you describe the intersection between zines and graffiti documentation traditionally?
Droid 907: I’ve referred to this work specifically as a “brag-mag” of sorts. In past zines I have collaborated or tried to archive other writer’s graff with the intention of telling a broader story. With “Sex or Suicide” I wanted to focus on a more intimate relationship I have with writing. I think zines usually focus on an individual’s idea without compromising to an editor’s or publishing house’s agenda. By hook or by crook, graffiti doesn’t compromise too much of anything.

Brooklyn Street Art: As an artwork, Suicide or Sex is a compelling cavalcade of freewheeling handmade graphics, low-res photographic documentation, randomly styled powerful and mundane text intermingled, and deliberately anti-design design work. As a diary, it may be a cry for help. Discuss.
Droid 907: There are both romantic interests as well as some dark aspects in my life that were deliberately revealed in the work. I’d say most graff zines concentrate on transgressive behaviors and illicit activities that are admittedly entertaining, but rarely do they try and reveal more humanistic qualities. I wanted to challenge the traditional approach to graffiti story telling by revealing some of my more vulnerable traits. 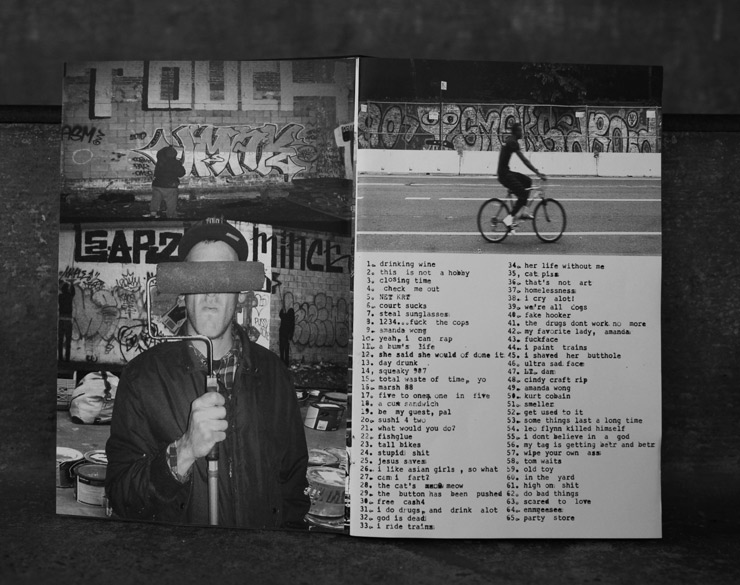 Brooklyn Street Art: Are you in love with Amanda Wong?
Droid 907: The answer to that question is on the cover of the work.

Brooklyn Street Art: Do fags love you?
Droid 907: The answer to that question is also on the cover of the work. 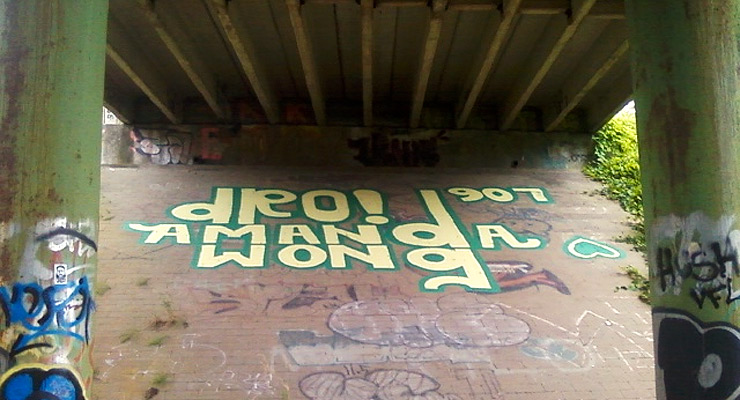 You see, told ya. (photo courtesy and © Droid)

To find out more about the zine Sex or Suicide: (you’re fucked either way), please click HERE. It is also available in Williamsburg Brooklyn at Desert Island Books, at Reed Space on the Lower East Side in Manhattan and Atomic Books in Baltimore.