A cheerful and entertained crowd gathered under the high tin ceilings and a cloud of Wolfbats in the warm and gentle space that is Space 1026 in Philadelphia on Friday for Dennis McNetts’ opening.

Maybe it was the tall thin windows, the skylight, or the shabby chic furniture, but McNett’s work seemed to work very well in this unassuming and welcoming atmosphere – a bit of a departure from the austerity of the white-box gallery. If street art is making a transition off the street this kind of atmosphere can feel just like home.

While you are looking at these pictures, enjoy Von Cello doing his rendition of “Iron Man”, by Dennis’s all-time favorite metal band, Black Sabbath. Dude makes some serious and seriously entertaining faces when he plays his cello. ROCK ON!

Undoubtedly it’s the proximity to Halloween that brings it on and makes it work so well, but some McNett fans can’t help but get dressed up for a show. Trick or Treat!

See our interview with Dennis for this show HERE. 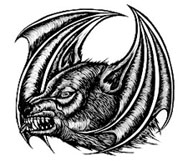