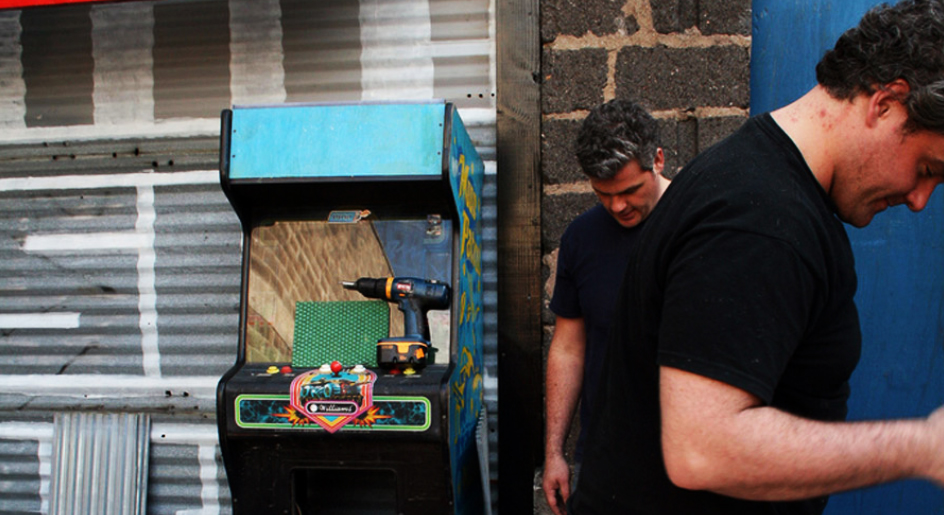 Skewville Helps the Community by Participating in “The Putting Lot”

I have no pigging idea what real golf is like – it seems so snoozy and upper crusty and I don’t have any polo shirts or Dockers.  At a recent BBQ this guy Uly told us about Disc-golf, which he said involves frisbees, buckets, doobies and hippies/rednecks.  Sounds like my family reunion. Kidding! There are no buckets at the family reunion.

I can see your true colors shining through. And that’s why I love you.

Anyhoo, today we are talking about Mini-golf in industrial Bushwick, which doesn’t sound like it would be too hard to master and you don’t have to know about Bogeys or being On Par. They call it “The Putting Lot” and it’s sincerely and educationally constructed in an empty lot, and may be the first real addition of greenspace for the citizens of Bushwick since before Jay-Z was playing stickball.

The landlord of the lot is letting these people create a golf course on his property this summer because they seem like such nice earnest kids. Anyway it’s not like they’re a bunch of metal-heads or hip-hop thugs or graffiti artists or anything.  Ha-HA!  Just checking to see if you are still reading. A family plays the course on 4th of July.

Little do they know, two of the most nefarious street artists, Skewville, have infiltrated their high-minded community-awareness-raising project and have constructed a pitch-perfect 3-D Skewville environment for hooligans – where else- in the back of the lot.

Oh, sure, they LOOK like they are up to nothing.

Gabriel Fries-Brigg, one of the Putting Lot organizers, gave us a little tour of the Green greens.

Gabriel Fries-Briggs: The Putting Lot is all about trying to combat the lack of affordable recreation and general lack of recreation in New York City. The theme of the course is ‘urban sustainability’, but to us, fun is an essential part of making neighborhoods sustainable. In Brooklyn, where The Putting Lot is located there are also countless artists doing amazing work. A lot of that work goes unseen or unappreciated. We wanted to create a forum where people would literally get into the art, walk through it, think about it, and enjoy it.

Brooklyn Street Art: Why did you pick Bushwick as a location for this?

Gabriel Fries-Briggs: We chose Bushwick for a range of reasons. The first being mostly selfish, many of the volunteers that started “The Putting Lot” live in Bushwick and we wanted to put recreation near our homes.  Bushwick is also lacking in recreational options more than many neighborhoods, especially for kids.

Gorgeous Green Bushwick is a leafy paradise for kids in the summer.

Beyond that, the industrial nature of Bushwick is rapidly changing and vacant spaces are both plentiful and crucial to the neighborhood’s evolution. Vacant spaces are often places where developers, neighbors, and city workers come into conflict, but they can also be rich places for residents to imagine what they would like to see in the city. The conversion of spaces to different uses will have a big impact on Bushwick as a neighborhood. The Putting Lot proposes one use for these spaces and suggests the possibility of many more.

Brooklyn Street Art: How does it compare to the competition like Six Flags?

Gabriel Fries-Briggs: We won’t make you throw-up. Plus, you can hop on the L-train and be at The Putting Lot in minutes. The most important distinction might be that The Putting Lot was designed and built by Brooklyn artists. You don’t need to go ride a batman-themed rollercoaster to get your fix of fun in the summer. The Putting Lot lets visitors interact with the ideas and work of their local arts community.

Brooklyn Street Art: Are there any water slides?

Gabriel Fries-Briggs: Hole #3 has an extremely-tricky water hazard. It doesn’t make the hole any easier to play when people add to the obstacles by getting in their swim-suit and hanging out in the water, as happens on occasion.

Playing in the gutter is not usually recommended.

Gabriel Fries-Briggs: The Putting Lot issued a call for submissions in the spring and selected the 9-holes out of the sumbission pool. It’s an incredibly diverse course and group of people. Designers include gallery artists, art collectives, street artists, urban planners, engineers, architects, bike enthusiasts and students.

Should nausea or light-headedness occur while golfing on this hole, bottles of Peptol-Bismol are handy.

Brooklyn Street Art: What about those Skewville jokers?  Did they give you any trouble?

Gabriel Fries-Briggs: Skewville made hole #6, aka The Bushwick Art Mart. The only trouble they cause is that their hole tends to back up now and then as people like to linger because it’s so much fun. I have to admit though, during the construction process of The Putting Lot I never knew what Skewville was going to build next. Watching their hole come together was a constant surprise. One day they’d be hanging a huge awning, the next day they’d be installing construction barriers. It wasn’t until just before we opened that they brought in the last of the suprises and we were blown away, it looks amazing.

Brooklyn Street Art: What do you think of street art?

Gabriel Fries-Briggs: Take the Skewville hole for example, the front of the art bodega is periodically painted over by different street artists. It’s the only hole that has continued to evolve since the opening of The Putting Lot. While there are so many reasons to respect street artists, this is one that I love best-that street art is a constantly evolving and changing form. Something you love today might not be there tomorrow. The Putting Lot itself is a temporary project. We encourage visitors to draw on pictures we have of the lot when it was empty and imagine what might be put in the space when we are gone in the fall. Street art has this quality that we try to emulate; always adapting based on the community around it.

Bring on the flava!

All images courtesy of The Putting Lot unless otherwise noted.
The Putting Lot
12 Wyckoff Avenue
Brooklyn, New York 11237
(Take the L train to Jefferson Street)Hours of Operation:
Wednesday-Friday, 12pm to 8pm
Saturday and Sunday, 10am to 8pm 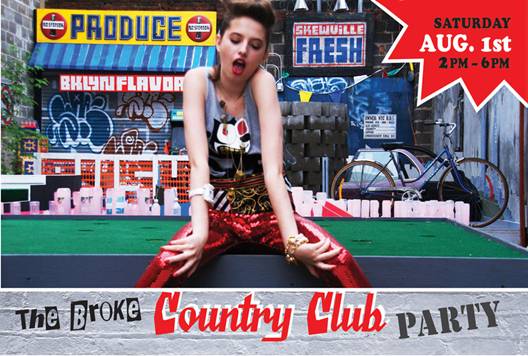 Win a Pair of Skewville Sneakers!

OR COMPETE IN THE MORGAN SHEASBY NATIONAL SAIL CAR REGATTA.

BRING YOUR OWN SAIL CAR OR ASSEMBLE ONE ON SITE WITH RECYCLED MATERIALS.

LIVE PAINTING, CUSTOM SCREENPRINT TEES WHILE YOU WAIT, VISIT THE BAD ADVICE BOOTH AND STAY FOR THE WATER BALLOON FIGHT!!!

SEE THE BSA INTERVIEW WITH THE PUTTING LOT HERE