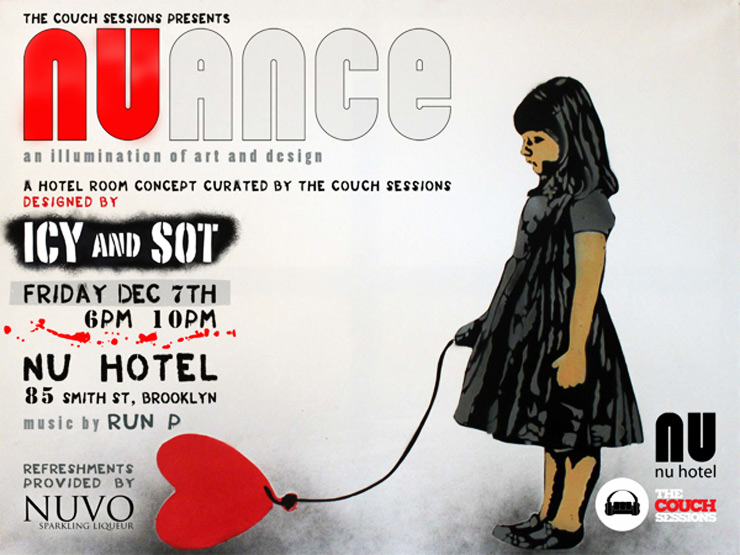 The Couch Sessions and the Nu Hotel present NUANCE, a creative series of ongoing hotel room installations highlighting the country’s most sought out artists and designers. NUANCE transforms four hotel room walls into blank canvases, allowing a hand selected series of artists the ability to create breathtaking mural designs. Each room project will also be matched with a custom music playlist curated by The Couch Sessions.

Iranian street-art brothers and stencil artists ICY AND SOT kick off the series with an exclusive event on December 7th, 2012 from 6 – 10PM. The event, sponsored by vodka brand Nuvo, will allow the media and the general public access to view the hotel room and meet with the artists.

Hailing from the city of Tabriz in North West Iran, brothers ICY AND SOT continue on their creative crusade to traverse pre-conceived perceptions of traditional Iranian art’s brevity through their highly intricate yet striking stencil artworks. Despite Iran’s cultural flourishing since the 2009 uprisings in Tehran, the challenges faced by creative free expression in the country are a constant struggle for its artists and society today. It is an oppressive force that provokes the Iranian art scene to fluctuate between an inhibited elegance and raw underground energy. This ambiguity is reflected in the vulnerable yet hopeful deep-set imagery of ICY AND SOT’s street art.