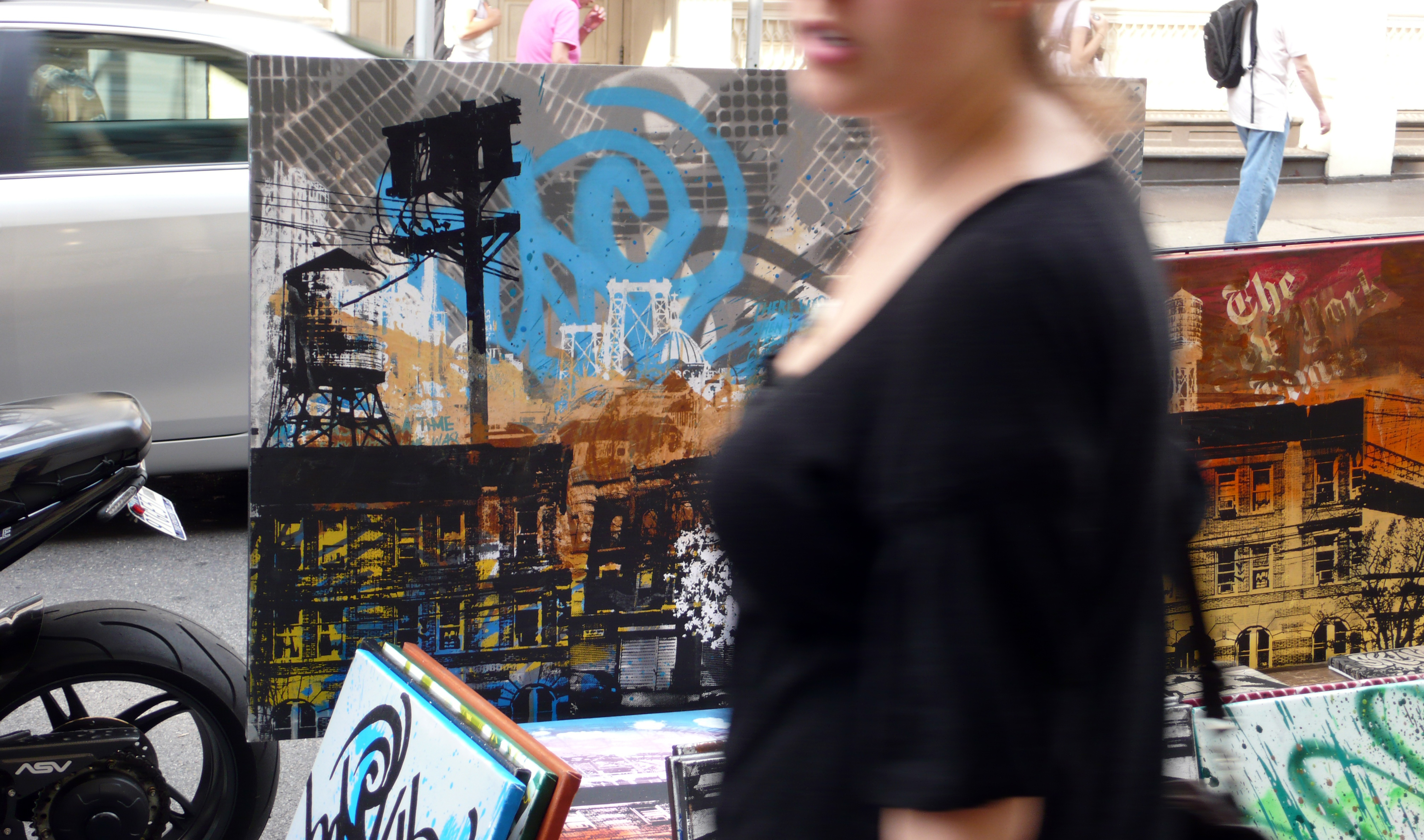 Artist collective Destroy & Rebuild blasts past obstacles and finds opportunity through persistence on the street.

True New York City is in the streets and in the hard-won winning grit of these three young urban artists; NYC is in their every utterance, every step.  It’s also all over their bombastic color-infused artwork; the man-made urban symbols and signposts of this great city are the superstructure that forms each sentence and drips down every canvas….

The Building Print 2 by Destroy & Rebuild (courtesy the artists)

These are the readily recognizable elements that make up New York: The Brooklyn and The Williamsburg, The Empire State, Twin Towers, factories, brownstones, tenements, chain links topped by razorwire, NYPD cars and taxis, graffiti trucks, the Coney Island Wonder Wheel and parachute jump, choppers in the sky, maples and oaks, the brass-balled bull of Wall Street, the New York Times, the stars and stripes stretched across the stock exchange, water towers, rolling grids of windows, colorful bloated throwies and a big-ass Revs tag.  All of this vaunted big-city imagery is splashed and layered into their work, and in their words.  It’s the language of destruction, and of rebuilding.

The Twin Towers by Destroy & Rebuild (courtesy the artists)

Destroy & Rebuild is a three-man Brooklyn-based artist collective whose art is structured and splattered, pieced and sprayed, screened and collaged, photographed and markered. More often than ever, it’s balanced.  All three guys got their start doing illegal graffiti on the streets and subways of New York City.  Eventually they decided to form Destroy & Rebuild on the premise that they used to destroy the city with their graffiti and now they are rebuilding it with their art.

“I feel like we are almost the definition of street art. Because we’re all bombers that come from the street, shelters, f*cked up childhoods, parents dying, drug addiction, and all that. But instead of falling victim to that and letting that take over our lives we just took it and kept on doing this.  Maybe it was going to jail and all that that made us have to do this but we’re doing it now,” explains Mike as he watches people stop by the table to look at their work.  The words don’t fly out in a bitter way, but with the confidence and authority of a personal truth.

Positioned on a street spot in Soho for going on three winters, Anthony (aka Avone), Mike (aka 2esae), and Ski all have the same position; artist and salesman.  On most days you’ll find them there with with canvasses stacked, displayed, and leaning on the front and sides of a collapsible table.  Each offering is a collaboration piece that mixes their personal styles and employs every new thing they are learning about their craft. The selection continuously evolves.

Today Ski isn’t here because he’s representing them in a show at a gallery in Austria, so Anthony and Mike tell BSA what their street art gig is about.

Mike: A lot of these elements have meaning to us; from the graffiti trucks that we paint to the buildings that we stand in front of every day.  We even have pictures of our storage building, where we store everything.

While they talk there are frequent interruptions from potential buyers and curious inquisitors, to homies that roll by to give a shout out.

Anthony: I had a studio but I moved out. Right now I’m working out of my home, Mike is working out of his home.  We have designated studio space – like right now we are working in my living room, and I have the extra bedroom, which together I use for a space to paint in.  And Mike has a big apartment with extra space to paint in. So it’s kind of convenient in a way – we are spoiled in that manner.

Brooklyn Street Art: It sounds like a thousand canvasses a year.

Mike: Yeah probably. We have a lot of pieces that we sell and that we have in different places. We send it out a lot, to galleries, stores. We have a lot of work out there right now. We have some work right now in Austria, in Italy, some of it just went to Australia with Ski.  We have some in the Greene Space at 112 Greene Street.  We actually lend out our art to some people – they just use it to decorate their office.  A lot of connections we get through here.  We always take down all of our emails from people on the street and go home and email them all back.  We find them, invite them to our shows, like to keep communication with all of them.

Anthony: You know, a lot of people see you on the street, and they think you are low class; It’s New York. You have to forget about it.  I try to encourage others to do this, but I guess it’s kind of a blessing that they don’t. You got these kids who wanna say you are “commercial”, or that you are this and that.

Brooklyn Street Art: Isn’t that a typical criticism across the board that everybody gets no matter what you are doing if you are creative?

Anthony: Yeah, if you are creative – if you are working on a website at a company then you are “commercial”, if you are selling your art you are “commercial”… I’ve heard it all.  We just came out; it’s baby steps. But still we’re not in the door. We’re not anyone special. We don’t have an art rep, we don’t have an agent, we don’t have a gallery – we’re doing it ourselves. And we come from nothin’. You know what I mean? His mom’s not rich. We come from public assistance, housing projects… So for us this is an accomplishment.

The accomplishments are propagating, as is the quality and variety of the work.  Over the past three years the work of Destroy & Rebuild has shown growth and maturity, and the guys emphasize that it came from continued practice, studying the game, and saying “yes” to many projects that stretched their minds and challenged their abilities.  They continue to make custom work for private clients and paint murals in peoples’ homes, as long as they can keep their personal style intact.  Keeping the lines of communication open with opportunity has also meant they get invited to participate in group shows and solo shows abroad, create art for videos for 50-Cent, Grafh, and Busta Rhymes, design art and posters for Playstation,  paint semi-nude women with Ron English for the art-based social networking site Planet Illogica, have a show up this month at Destination Art Space in the Meatpacking District, and paint live at the MBP Urban Arts Fest in Brooklyn on October 3rd.

BSA: Because you’ve been working so much you can produce good work fast. Being able to produce very quickly is a skill in itself.

Anthony: Definitely, that’s the power of silkscreening as well.

BSA: And the way you apply it, the way you place it. You’re eye has to be getting better with each successive round.

Mike: Yeah your eye, the color, the composition. Like if you look at our stuff in the beginning we were just taking it and screening anything anywhere.  Now we just keep stepping up and going higher.

BSA: So this is your education.

Anthony: You know school is good for that, the experience of it. And the networking part, which is good too.  I learn more from you or Mike than I do from sitting down and doing a class or something.  So I would take the networking aspect of school and give that to people.  Being around other people who are trying to upgrade themselves is a good thing.

BSA: What is Destroy and Rebuild?

Mike: It was just a saying for us for a while. We didn’t even dub ourselves with that name for a while.

Anthony: It was always like a “love and hate”, “yin-yang”, “boy-girl” thing. Can’t have peace without war, those kind of little sayings.  So we are building when we are working together, like right now, building means we’re adding on.  And we are destroying negativity,  we’re destroying stereotypes.

It also went great with our personal history. We had our time. We know vandalism is vandalism. At the end of the day we don’t go home and get arrested and say “Oh we were doing our art in the street”.  So we have that element – so that is destruction to a certain degree. And now we’re rebuilding. We’re rebuilding our lives, ourselves, our city – we make this city look good.

Brooklyn Street Art: So many artists give up  – they give up when they hit a couple of obstacles because they don’t have the fire burning in them.

Anthony: And it’s hard because you get obstacles. It’s harder for us. Yeah, Obama is president, blah blah blah, but it’s like “This kid has an afro and tattoos all over him and a swagger about him” so regardless of what he does, he’s judged.  He’s got a show going on in Austria right now, he just got back from working with PlayStation – all this stuff. But you still got people who say “He’s just a street kid, or a street artist or graffiti artist.”

Mike: Yeah, my upbringing was f*cked up. But instead of using that as an excuse to not do anything, I used it as a reason to knock out school. Nobody ever did college in my family.  I got my degree in graphic design, my little associates. But that totally opened my mind.  That sh*t opened my mind to this. We don’t have any recognition yet. We’re basically kind of the underdogs, you know. But we’re kind of like the rookies on the team, but we’re really talented rookies.

Anthony: Time itself sometimes destroys stereotypes you know.  You know people are biased for some reason.  You don’t have to address it, you can just go on your own accord and that in itself is good.

Mike: No, you just gotta keep doing what your doing, you know? Hopefully somebody’ll pick it up.

“The Queens Perspective” by Destroy & Rebuild (courtesy the artists)

“Sky is the limit and you know that you keep on, just keep on pressin’ on”  – Biggie Smalls