It’s the BSA Reader Video Request edition of Fun Friday for all us peeps who are not shopping today. We asked our Facebook friends and fans for their favorite street art related video flicks and give them to you here- in no particular order. Peace out and have a great Black Friday everybody.

“In 2006, we created this short for the University of Southern California’s Public Arts Studies Program.

This documentary explored the studios and methods of six of the top street artists in America: Faile, Skewville, Mike De Feo, Dan Witz, Espo and Tiki Jay One.” Recommended by Lou J Auguste

In Bed with Invader

H Veng Smith likes this one with Invader.

“At the end of November (2011), the En Masse Art Initiative flew down to Miami to take part of the Miami Art Basel events. With the help of Sodec Quebec and Galerie Pangée, EM teamed up with Scope Art Fair, Fountain Art Fair, Safewalls, Primary Flight and the Found store to create multiple work of art. During 10 days, the team grew exponentially, adding members from all around the globe; Tel-Aviv, Montreal, Brooklyn, Woodstock, Staten Island, San Fransico, San Diego, Miami etc.”  – recommended by Beth Tully

Emus Primus and photography of Berlin Street art, set to music. As recommended by Da Andal

The keynote is about my travel into Palestine.  Considering what is going on there –  Being that everyone is talking about the violence, this video can reflect a bit of light on how there are some ways to find peace.  It may not find the sort of wide peace we hope to all gain there, but through the message in the keynote, I hope people can see that Israel and Palestine can share a common beauty: Street-art.” Shai Dahan

“The third episode of BURN graffiti video series. Best episode so far! Featuring rolling freight, live painting and more!   As recommended by Beyond The Rail Photography

A stencil artist creates a piece as a tribute to Japan in the wake of the destruction it suffered last year. – As recommended by Crist Graphicart

“an unscientific point of view on the beginning and evolution of life … and how it could probably end. direction and animation by BLU.”   This one recommended by Martha Becker

In Vietnam on a roof. As recommended by The Yok

The full documentary – “Through interviews and guerilla footage of graffiti writers in action on 5 continents, BOMB IT tells the story of graffiti from its origins in prehistoric cave paintings thru its notorious explosion in New York City during the 70’s and 80’s, then follows the flames as they paint the globe.” Recommended by Orson Horchler

Since the January 12th earthquake we’ve seen lots of neighbors jump on board to help the people of Haiti. Hell, Lou A. even went there to help in person. (Go Lou!) Brooklyn hurts when Haiti hurts, and it’s been fantabulous to see a lot of artists really put their hearts where their mouth is.

Having a heart for Haiti is one thing, but it’s also important to “walk the walk”, says Street Artist Billi Kid, and you have to agree with him.

We do. That’s why we’re helping him and telling you about this fundraiser.

What's not to love?

The project is called “I HEART HAITI” – seems simple enough, and we’re glad to see that the artist has figured out a way to give 100% of the profits to the people who are hurting.

These three companies have generously donated their time and services
Alternative Apparel ,
The Shirt Factory , and
The Public Works Department

The I HEART HAITI website is LIVE and they are ready to take your order for Men’s and Ladies styles in 4 different sizes.

PLEASE SEND THIS LINK TO YOU FRIENDS, Twitter it, FaceBook it, Text it, and send your grammy a nice hand written letter.  She probably deserves one anyway even if you don’t mention the tee-shirt.

Brooklyn Street Art: So, how did you conceive of the design for the shirt?
Billi Kid: I’ve always been a fan of Milton Glaser’s “I Heart NY” tee. Honestly, it was the first thing that came to mind. The message is simple, yet resonates to the core of how we should feel about Haiti right now.

Brooklyn Street Art: It seems like it’s really nice quality….
Billi Kid: Alternative Apparel’s tee is of the highest quality and feels like butter. It’s 100% pure Egyptian cotton and retails for $19.95 without the silk screened artwork.

Brooklyn Street Art: Isn’t it hard to get partners to do the production and shipping for a project like this?
Billi Kid: I have to give all of the credit to the Public Works Department. They brought in all of the partners involved. All I did was design and produce the artwork and website. No small feat, but it felt good doing it. One of the great things about unemployment is you have lots of free time. LOL Brooklyn Street Art: You are not a major corporation – how did you manage to give 100% of the proceeds to Haiti?
Billi Kid: Again, PWD has all of these great relationships with the folks involved. Fortunately, they all wanted to donate to the best of their abilities. The Shirt Factory printed over 12 dozen tees at no cost and pledged to do more if our efforts are successful. I’m sure what we raise is just a drop in the bucket, but every little bit counts.

Brooklyn Street Art: Can you talk about the aid organization you’re working with?
Billi Kid: We decided to give all of the donations to the American Red Cross because they seem to be the most legitimate and involved charity out there. Unfortunately, they protect their brand to such a point that they asked us to take their logo off our website. No hard feelings though, we have all heard how people rush to profit from such tragedies. OUCH!

Brooklyn Street Art: People in Haiti are living under a piece of fabric, or plastic. How long do you think they will continue to need help?
Billi Kid: I have heard it said that this tragedy was not an act of nature, but rather an act of poverty. It will take decades before we see real progress from this earthquake, let alone their economy.

Brooklyn Street Art: Anything else we should mention?
Billi Kid: I have to give a shout out to BSA. I Heart BSA!!! 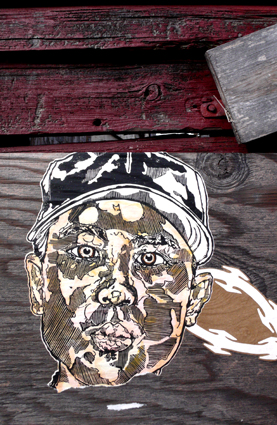