In response to our posting for the “It Get’s Better” campaign to give support and encouragement to young people who are bullied for being Lesbian, Gay, Bisexual or Transgendered, reader and light artist Vicki Da Silva sent us a video she made on 159th Street with the George Washington Bridge in the background. Tyler Clemente, a young gay college student in New York, jumped from the bridge to his death this past fall, and this is her simple tribute. 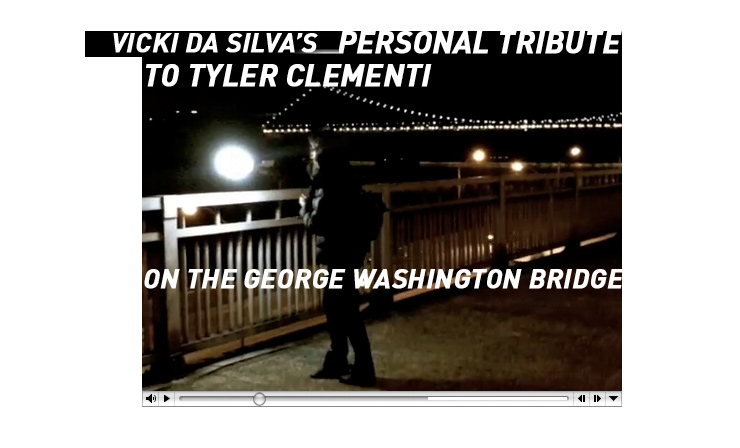 In the interest of spreading some love and maybe saving some lives, we want to send a shout out to the Gay, Lesbian, Bi-Sexual, and Transgendered peeps who read this blog and to the straight people who have them in their families and schools and paint supply stores and offices and houses of worship. That’s pretty much everybody.

Over the past year we’ve seen this blog reach a lot of different places that we never thought it would – including small towns and rural areas in this country and around the world. The Street Art and graffiti world has its share of homophobia and ignorance of course – this kind of art has always been a direct reflection of society at large so why wouldn’t it? But it’s also getting better.

Truth is, whether you are in a small town or a big city, we know that many LGBT folk of all incomes, education, races, languages, et cetera, are frequently the target of bullying, abuse, threats, name calling, and violence.  These days it can come via notes on your locker or Facebook page, Twitter feeds, or texts – as even dumbo bullies can figure out a bit of technology. We also know that merely being a teenager who is a sexual minority can often result in feelings of extreme distress, fear, anxiety, isolation, and can cause suicide – not because of anything you are, but because many people are still boneheads (or just closeted).

So here’s the message, people: If you are afraid and feeling like crap – just remember that you are not alone, this won’t last forever, we love you exactly the way you are, and things will get better. There is a big world of other weird, different, beautiful, loveable people just like you who will welcome you when you get out of “High School Hell”. Also there are a lot of straight people who are not insecure about their own sexuality who will stand shoulder to shoulder with you and fight when times are ugly – they’ll even celebrate life with you. So hang in there and stay tough! It may not look like it right now but try not to worry so much, it gets better!