This week marks the two year anniversary that Arianna Huffington and Kimberly Brooks and team launched HuffPost Arts and we congratulate them on this achievement. An artist herself, Kimberly has employed that special vision, enthusiasm, and guidance to the venture,  allowing it to grow in an organic way, encouraging many voices to sing and many views to be seen. Like Kimberly says in her piece today, “We embrace the idea that everyone is an artist.”

“Here we are, two years later, after the merger with AOL, our expansion into Europe, Canada and Latin America — the art, writings and comments you see here now constitute the most widely read arts blog in the world,” she says as she surveys the journey. Brooklyn Street Art is proud that we have been contributors to HuffPost Arts since its inception with our in-studio interview with Street Artist Gaia right here in Brooklyn on June 17, 2010.  Since that time we became regular contributors to the page with 63 pieces on Street Art around the world, in studios, and in museums. With Brooks’ avid encouragement and the expert guidance of Arts Editor Kathleen Massara, we have even been able to scoop publications like The LA Times and the New York Times with our reviews of LA MoCA’s “Art in the Streets” and the Brooklyn Museum’s important Keith Haring show this spring.

Kimberly likes to say that bloggers are like the Street Artists of the Internet.  She may be pulling our leg, or she could be right on target. Whatever it is, we’re happy as hell about it! 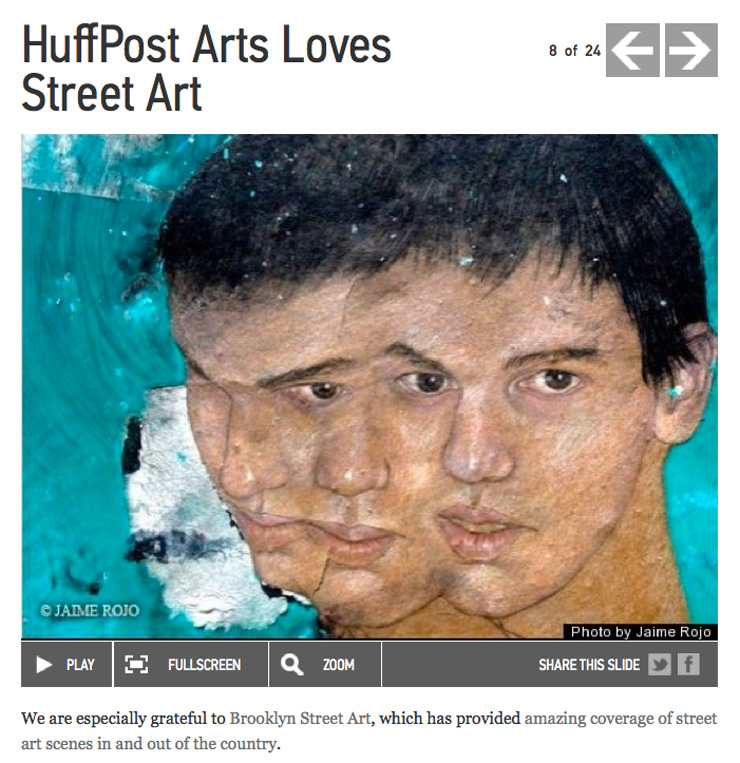 See Kimberly’s cover story and a full compliment of images from her first two years here.

Should Bansky Graffiti Art be Listed? It’s been quite a year for Banksy, but does the increased popularity merit legal protection for his art? A recent study makes the case that his most important works should be listed as assets of cultural significance in the UK.

John Webster, a postgraduate law student at Bristol University Law School (in Banksy’s hometown), recently published a paper titled “Should the Work of Banksy Be Listed?” in the Journal of Planning & Environment Law. The paper, part of Webster’s dissertation, suggests that Banksy’s art might benefit from the protection of the Listed Building Act, which seeks to protect structures of architectural and historic significance.

To continue reading  this article and for more photos go to: The Huffington Post ARTS…