For the past few days we’ve been highlighting some of the artists whose brand new works will be debuted this week at Moniker International Art Fair this week. We are pleased that our editor in chief, Steven P. Harrington, was asked to write the Moniker catalogue introduction and today we share with you his original text to give you an idea of his perspective on having this art fair in BK.

From the seedy to the sublime, Brooklyn’s underground and street culture always bubbles up to the surface like hot gritty pavement tar when you least expect it – maybe because it’s character is so diverse and scrappy; a perpetual underdog, a fighter who never tires. Likewise Moniker has blazed many dark streets during its first nine years in search of new unusual inspiration and authentic voices. For its New York debut Moniker again short-circuits expectations and takes up a seriously innovative residence in the street culture epicenter of BKLN.

In the modern Urban Art story Brooklyn is known for giving birth to epic 1970s train writers like Dondi, 80s train/canvas artists like Daze, crossover iconoclast graffiti/Street Artists like REVS in the 90s, and Street Art innovators like Bäst, Faile, Judith Supine, Skewville and Swoon in the 00s. Currently it claims the thickest density of international murals by urban aerosol wizards anywhere in the city – with the Bushwick Collective proliferating an epic scene of styles in the 2010s that brings a river of fans and tours out on the L train on any given sunny Saturday. 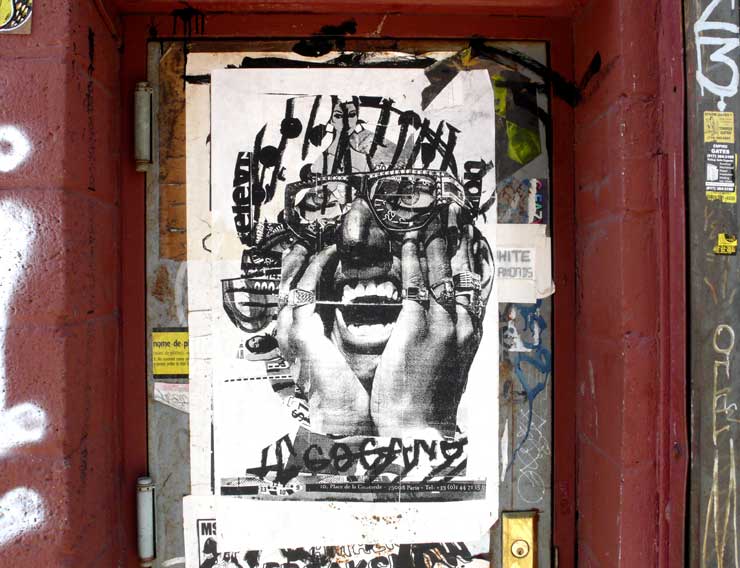 Curated, experiential, and immersive, Moniker again goes right to the source of this Street Art scene that has jolted many international collectors out of their comfort zones and sparked life into Contemporary Art in a way that nobody foresaw.

With an awesome shot of Gotham across the river and just adjacent to Williamsburg this site is where 4,000 workers in factories manufactured nautical rope for the Merchant Marine in the previous century, later becoming a marginalized and abandoned industrial neighborhood that was like a powerful magnet to Street Artists and graffiti writers until only recently. 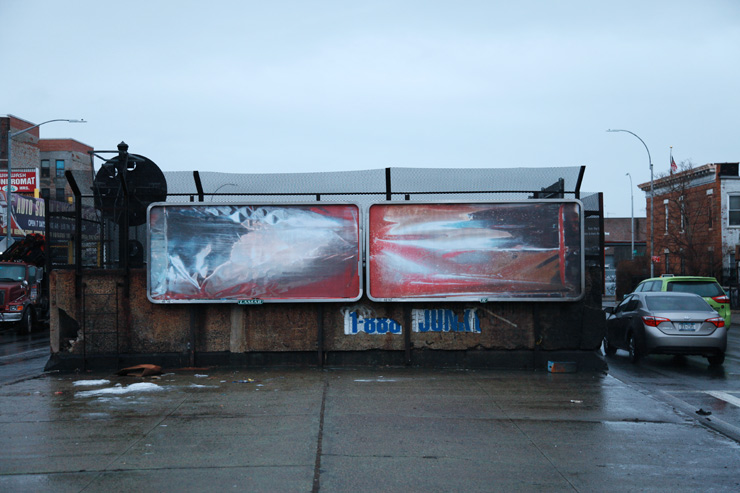 Right here only a decade ago my partner and I threw a Street Art burlesque show for 300 avant-art fans behind a graffiti supply store; acrobats, fire tagging and drunken DJs included. Months later, with abandoned buildings and empty lots at our disposal, we projected Street Art images meta-style on walls around the neighborhood along with 20 or so projection artists for BK’s own version of a renegade Nuit Blanche. 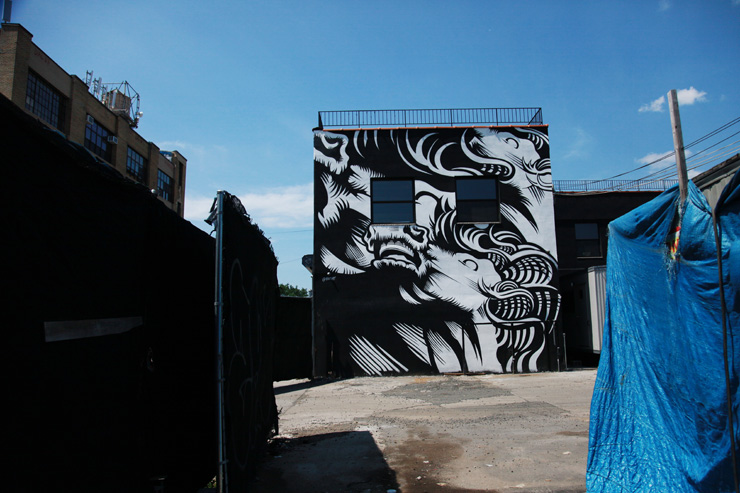 Only a block or two from where Moniker is sited graffiti throwups and bubble letters were scattered everywhere, squatters started fires to keep warm and scare off rats, skater kids regularly rode the underground paradise called “Autumn Bowl” by sneaking through a hole in the wall, and Banksy did one of his famous New York residency pieces here in 2013, “This site contains blocked messages.” The hardcore and anonymous REVS himself used a blowtorch to weld a dozen or so sculptures around this neighborhood during the 00s and ‘10s. There is at least one remaining.

And now Moniker 2018 beams out a new international signal to you from here, channeling that explosive Brooklyn DIY creative spirit up to the soaring ceilings of the Greenpoint Terminal Warehouse, effectively recreating the kind of immersive street carnival atmosphere that proved the ideal laboratory for Street Artists in BK like like Skewville, Dan Witz, Aiko, Mark Jenkins and countless others.

Now Moniker is introducing you to a dynamic crop of work by street practitioners on Brooklyn streets like Icy & Sot, Specter, and ASVP as well as the international high-profilers who have put work on the street here like Faith XLVII, FinDAC and Vermibus. 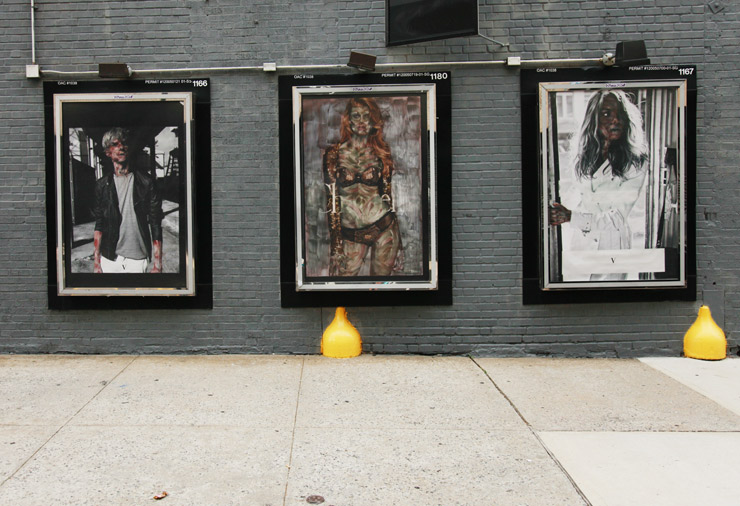 As Urban Contemporary takes a solid hold in art world parlance it’s only right that a unique event like this challenges the rules for installations. All original new work from a handpicked highly curated group of 27 exhibitors, you will not have seen these installations and pieces previously. Judging by the hefty buzz leading up to Moniker 2018 in Brooklyn, you might not see them again.

Reminds me of Street Art. 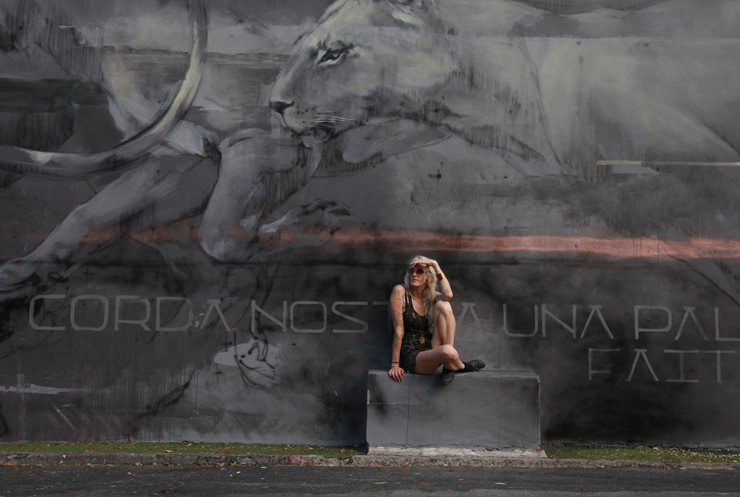 In advance of Moniker in Brooklyn this May, we are interviewing some of the artists who are influenced both by street practice and fine art as the contemporary urban art category continues to evolve. Today, BSA is talking to FaithLXVII.

A wistful interconnectedness is a common thread through the work of South African graffiti/Street Artist/muralist/fine artist Faith47, her calm monochromatic palette in service to eloquent expressions of internal, emotional and spiritual matters.

Painting and traveling around the world for two decades, her confident virtuosity is able to communicate with quiet strength, a subtlety not often found in the urban environment. 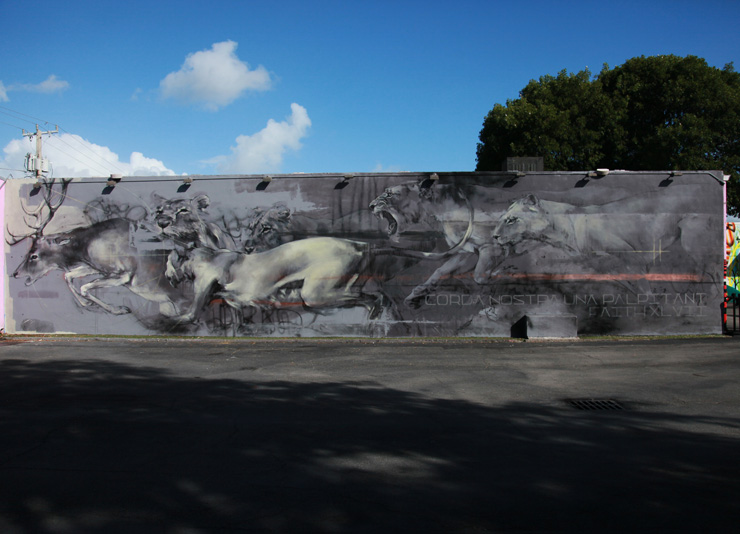 “Through her work, Faith47 attempts to disarm the strategies of global realpolitik, in order to advance the expression of personal truth,” says her current bio, and we spoke with her for a minute about her participation in Moniker.

BSA:How would you describe your work to someone who is seeing it for the first time?
FaithXLVII: How can one explain in words a language that is not verbal? 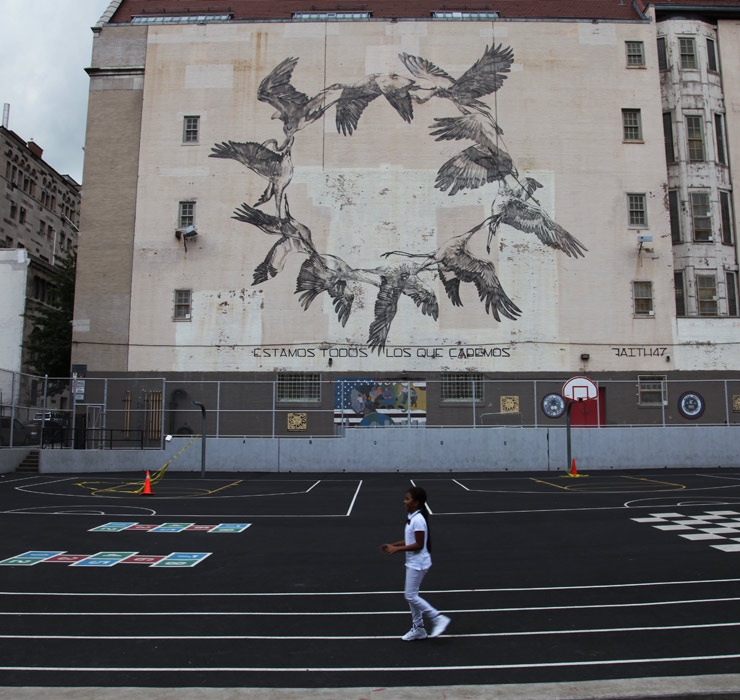 BSA:Are graffiti and Street Art allowed to change, or should there be a strict definitions they adhere to?

FaithXLVII: One can’t stop the clouds from moving. Nothing is permanent. We all know that the essence/ethos of how things started is now watered down. Nevertheless there are things that have grown out of what was. That is what interests me, the progression and evolution of certain artists who expand and refine their practice over the years. 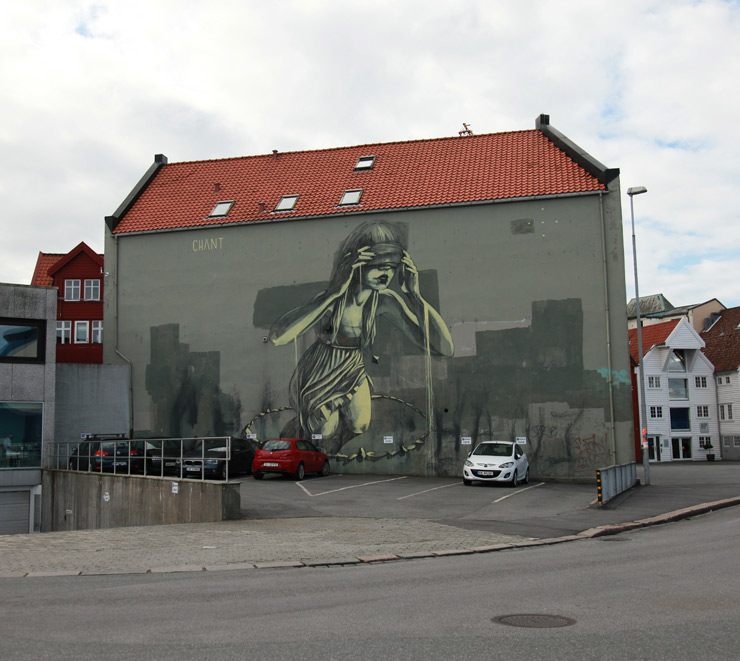