A Colorful Sprightly Enigma Emerges from his Private Brooklyn Shack

With visual mashups and genre-defying glee, Street Art in 2011 is making new rules for itself almost monthly at this point. Breaking from many graffiti and street art traditions there appears a new generation of what we’re calling “Storytellers” on the street today. It’s a New Guard of visual omnivores weaned on MTV and nourished by the Internet who consider all of recorded high art and low art history as an unending supply of small buckets available to dip their brush into. With individual, personal, frequently one-off pieces that are laboriously handmade this D.I.Y. decentralized army is hitting the streets with paper, brush, home made wheat paste, and other decidedly lo-tech materials. 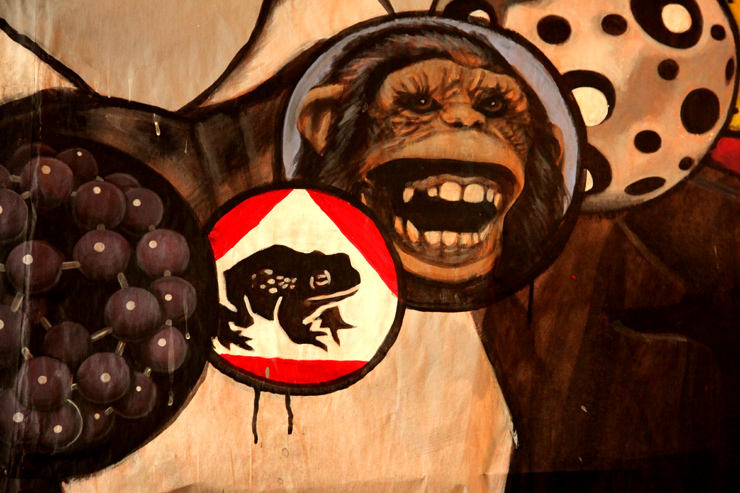 With just a couple of years on the New York scene, El Sol 25 is a droll mashup enigma, pasting up fully formed composites of people in doorways and on construction walls. Dropping a mix-n-match irreverent Girl Talk style, the warmth and continuity come from the fact that everything is handmade and painted. Pulling images from magazines and books and using anything from skulls to tutus to dildos and Obama, El Sol 25’s plundering is almost Dadaist except that the outcome is reliably figurative, and each element is meaningful to him. But as to how you interpret it, the artist is happy if you make your own story. 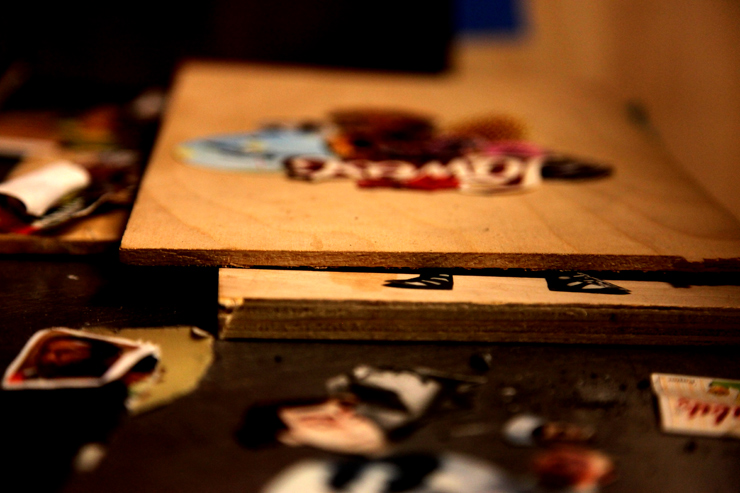 Frankly, many a viewer doesn’t know what to think or who this is coming from – as El Sol 25 has let the art do the talking until now.  And as the odd and sometimes humorous eye-popping work keeps appearing, it has also been gathering a buzz from street art fans wanting more details on this anonymous artist. What are these figures of? What do they mean? And why is the work primarily in one neighborhood?

“Williamsburg is an amazing place to work for me because you’ve got your Puerto Ricans on the block, your hipsters on the block, your old Polish ladies on the block, and everybody in between and they are all appreciating the work. That motivates me. It makes me feel like we are not as separated as we like to think we are. We are actually all together, “ explains El Sol 25 on a recent tour of his hand-built “shack” inside in a Brooklyn basement. 60’s jazz – John Coltrane and friends – spins on a vinyl platter on the old record player in the corner of the one room structure as the alert artist sits next to the Teepee he’s been sleeping in. Every part of this environment is his, an inner sanctuary of peace to seek spiritual tranquility, and of course to make collages and paint them. 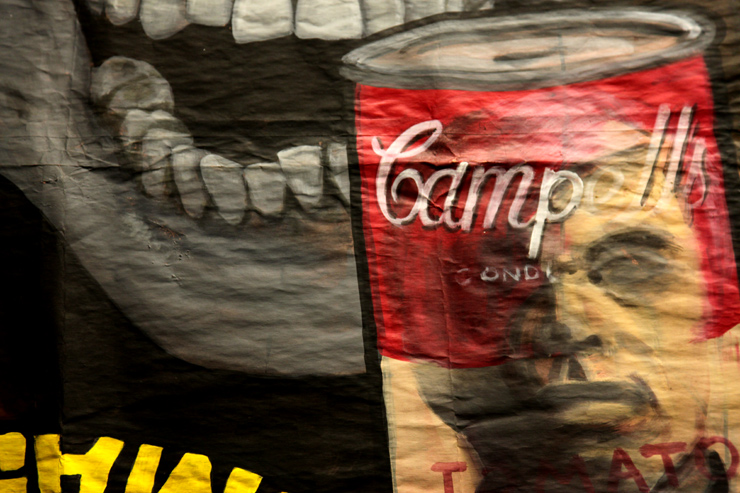 A former graffiti writer from down south, he’s onto something more multi-dimensional and challenging artistically now. No longer writing, the self-described “sort of” hippie is seeking to be in tune with his personal quest of spirituality and with all receptors switched to “On”. Preparing for a fine art show in a gallery in early summer the dial is at full throttle as he is sending and receiving energies and color and images and messages all at once – thus the need for the sublime serenity of this shack. 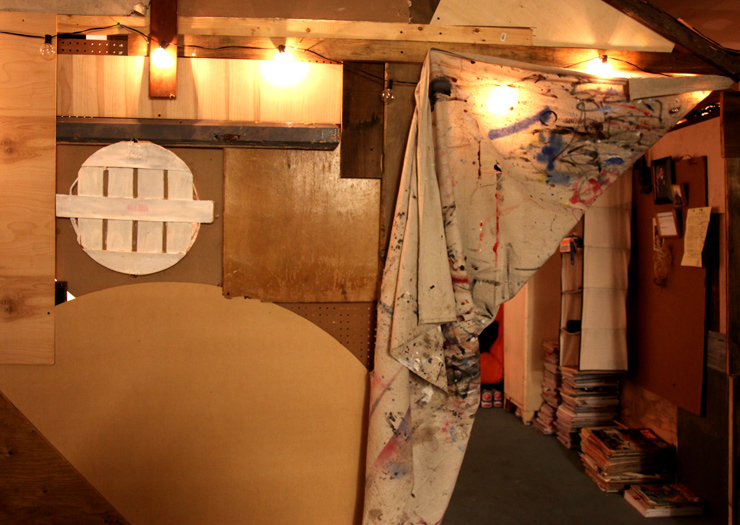 With the opportunity to see many works in progress, including some for the upcoming show which pairs the artist with poets, Brooklyn Street Art sat down for the first public interview of El Sol 25.

At the end of the posting, be sure to see the brand new video “Howdy”, directed by Conor Hagen, to see the process of producing just one piece. 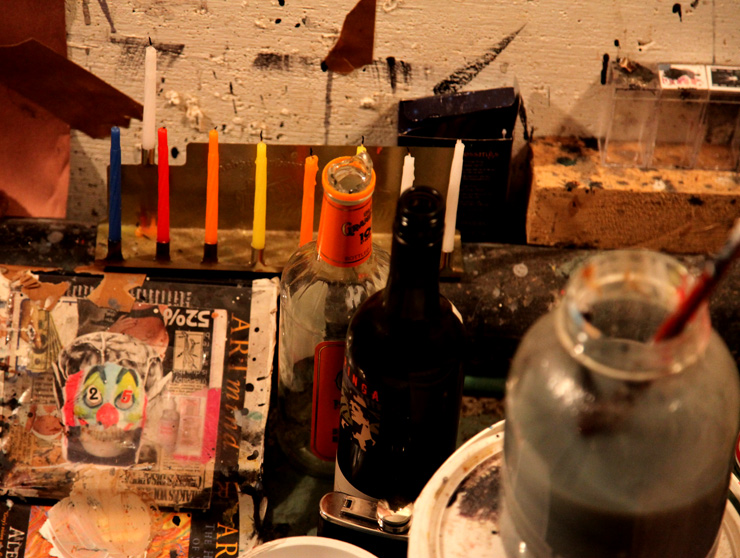 Brooklyn Street Art: Have you always been an omnivore like this?
El Sol 25: No, not at all. When I was first coming up and learning about expressing myself on the streets I had a specific idea. I was like, “It can only be this way and it can’t have any outside influences” and I learned very quickly that that is not fun. That’s not a way of integrating your everyday life into your work so I learned very quickly to let that go and let my work be as much a part of my life as my life is a part of my work.

Brooklyn Street Art: Do you see a connection between what you used to write and the work that you are doing today?
El Sol 25: I think the obvious difference for me, coming up as a graffiti writer, was just that a lot of time what motivates me is in the action. Seeing the aftermath of someone’s work to me is to appreciate that they took a huge risk to do it – to express whatever they wanted to express. When I was doing graffiti it was that immediate gratification, that immediate stimulation.

Now I can feel “in the moment” and it and does something that is very stimulating and wonderful and it takes me somewhere else. But I can also observe it the next day and appreciate it just as much as your everyday man can.

Doing graffiti, you do it and some people appreciate it, and most people don’t. They don’t like it and they want it gone. But with Street Art it’s little bit more for everyone, and I like that a whole lot more than the constraints of the graffiti culture. 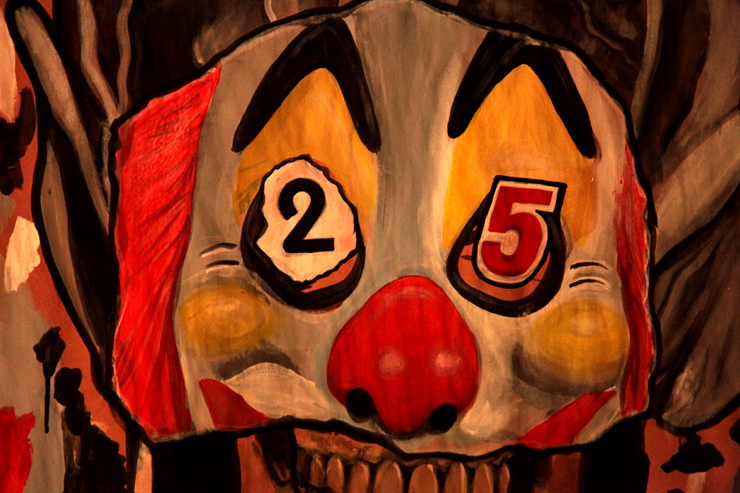 Brooklyn Street Art: There is another Street Artist who sometimes puts pieces up and then walks around the block and comes back and hangs out and listens to people’s conversations about it. Do you ever think about the stories people make about your work?

El Sol 25: Often times, most of the time. When I’m creating a collage I have a very specific attachment to it symbolically. When I’m painting it, it changes. When I see it on the street, it changes. So I like the idea of having these cryptic messages that people can absorb in whatever way they want. You can explain to someone the meaning behind a painting until you are blue in the face, and it’s not going to matter. They are going to have their own personal connections to it and that makes things interesting for me. 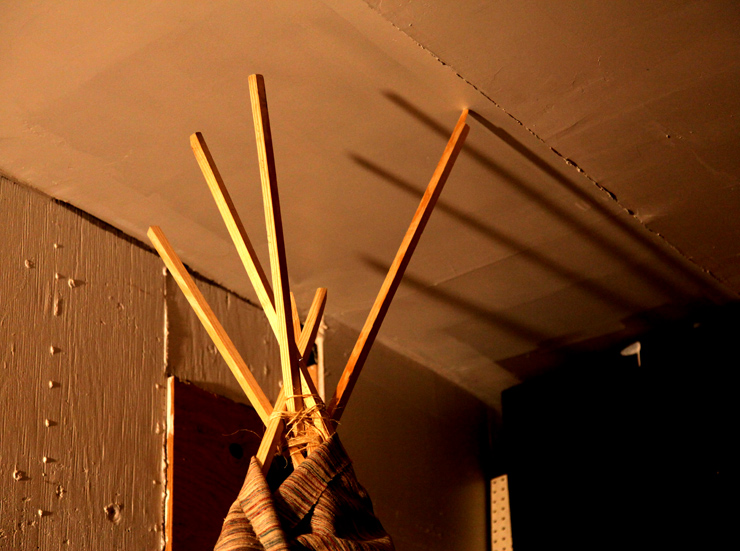 Brooklyn Street Art: Sometimes people do have an agenda and they have a specific message in their work but there is no way to really control the message.
El Sol 25: My hat’s off to them if they can but I’m sure you can relate – Art is a living thing – you learn from it. If you let it, art can be very transcendental. I learned very early on down south that you couldn’t spell it out for people. They’re going to figure out their own stories and if you embrace that, then that can bring more power to your work.

Brooklyn Street Art: Can you talk about the process? I think people on the street wonder what it took to get to the finished piece.
El Sol 25: I collect magazines, for a year sometimes. I recycle through them over and over and sort of absorb new elements that maybe I didn’t see before and I didn’t appreciate. I definitely go through books over and over and collect pieces for a long time until I feel like there is something there that I can connect to. And then there is the building of the original collages… and a lot of time I make these huge series of collages that I organize in a way that I feel like, “I can feel good about painting this as a street piece, or as a canvas piece in a gallery” So a lot of times I’m just collaging constantly. 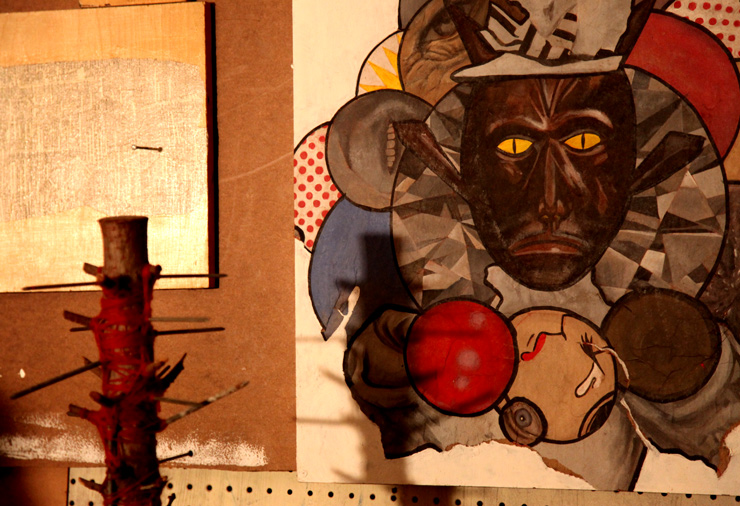 I’m really into the idea right now of making figures that are multi-gender, multi-race, multi-everything, because I don’t want to speak to one specific demographic. I want everyone to take something from the work. I definitely don’t want to speak only to people who are into the “street art” aspect of things. I think it is silly. I think people are going to connect to your work either way or I think it’s very considerate to think of how to connect with everyone, not just one type of person. That’s what ultimately motivates me so I definitely keep that in mind throughout the whole process.

Brooklyn Street Art: How long does it take to paint one piece?
El Sol 25: It depends. Sometimes I give myself small projects where I can do a lot of work in a small amount of time. Other times I really need to have some “alone” time where I need to have some time to reflect on my life and my work and my interactions with people I love and I definitely have times when I need to do pieces that are elaborate and pronounced – when I’m trying to work some things out. So sometimes it takes me an hour to do a piece, or sometimes it takes me two days. 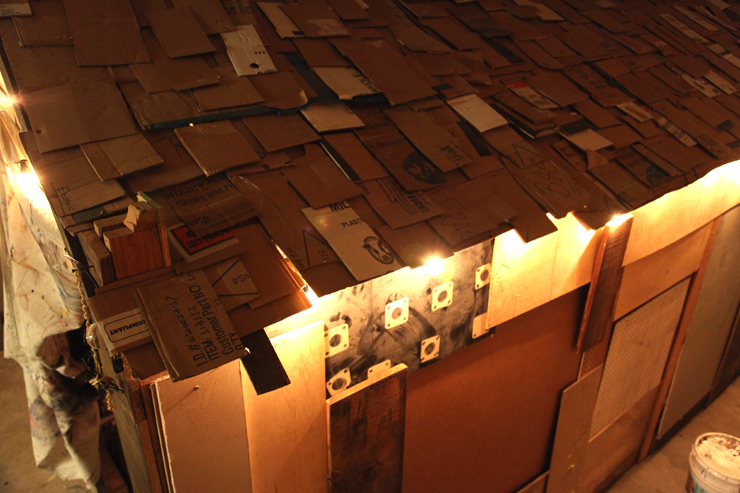 A birds eye view of the shack, which took two days to build. (photo © Jaime Rojo)

Brooklyn Street Art: Why wouldn’t you just photocopy or scan and print one of your collages and enlarge it on a large printer and paste it. Why is it more important to hand-paint your work?
El Sol 25: A lot of artists do that and I think that’s a great way of taking an idea and making it large and be able to put it all over the place and I certainly enjoy some of those works a lot. But for me personally I really like the idea of putting so much love into something that it is very specific to the passerby’s experience. I’m sort of a hippie so I really like the idea of putting a lot of love into a piece and for people to respond to that.

Brooklyn Street Art: Where do get your sense of humor?
El Sol 25: My mom, definitely. She’s the wild one. My dad’s the “by-the-book” OCD one – that’s where I get that. My mom is the life of the party, “I’m gonna make flan for everyone and they all have to have a piece and tell me what they think!” 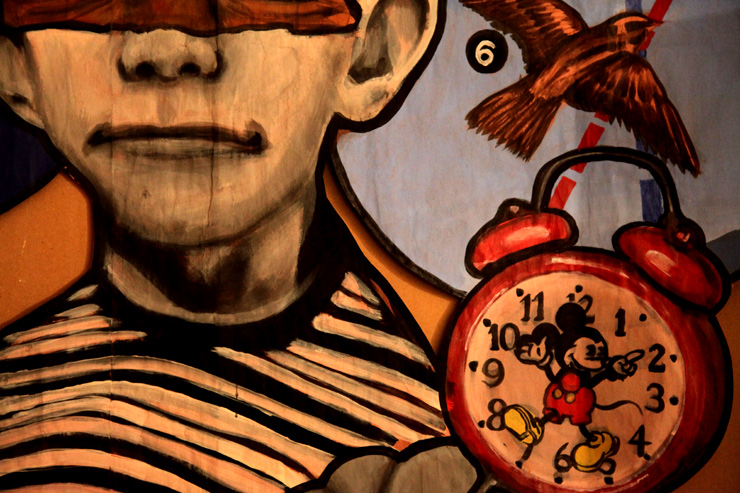 El Sol 25. Detail of a piece for the street in the studio (photo © Jaime Rojo)

Brooklyn Street Art: You use many historical references, historical figures in your pieces. You put in faces of presidents and they are wearing panties and basketball jerseys and you mash up history with pop art and pop culture and it can be very humorous and intensively detailed.
El Sol 25: Yeah the humor is definitely from my mom and it definitely a direct response to a lot of the artwork that is out there. I mean I love anyone who is willing to go out and take the risk and express themselves but I’m a little more interested in people who are provoking thought and provoking an emotional response.

You can be like, “I’m badass. Check out how badass I am” but you are really only expressing one thing.

El Sol 25: Yeah, and coming up as a graffiti writer I already experienced that. I already experienced feeling badass. “I just conquered that space! I’m badass!” But now I’m more interested in connecting with everyone, not just people in the graffiti scene or any scene. I love the idea of speaking to everyone. So that motivates the humor behind my work – take it a little seriously but not too serious. 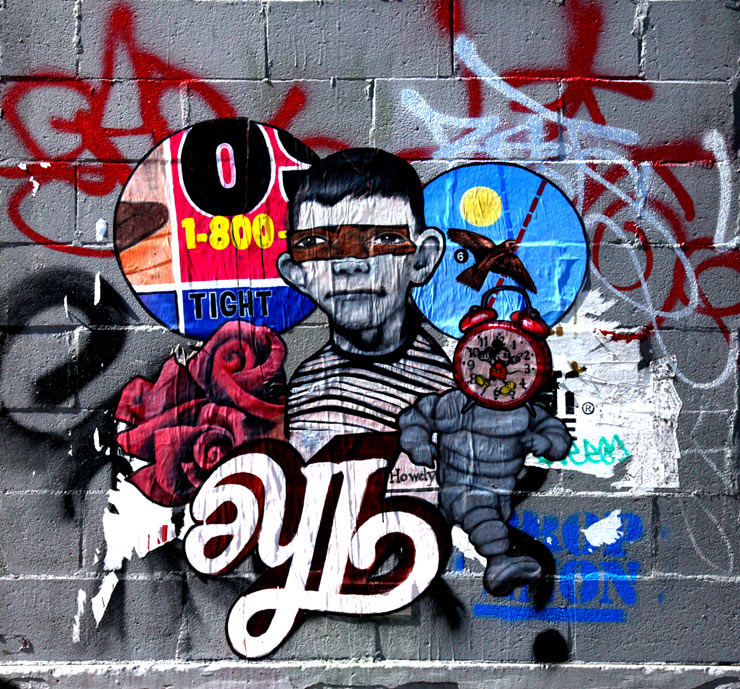 Debuting on BSA, here is “HOWDY” , directed by Conor Hagen.