1. Your Tour Through Dismaland with Butterfly and Lars Pederson
2. “The Wave”, Shepard Fairey in Jersey City
3. DIAN and his Bullshit Elephant in Brooklyn

It’s 30 minutes of sheer edutainment as the blogger/writer/documentarian named Butterfly gives a tour to the urban art curator Lars Pederson through Banksy’s Dismaland in cooperation with ARTE Creative TV.

The views are sadly hilarious, pure sarcasm and commentary on issues and behaviors.  If Street Art is meant sometimes to hold a mirror to us as we pass by, this is a genuine funhouse of mirrors at every turn. Of course, this isn’t Street Art – its site-specific contemporary art – and many of the artists are street artists, but not all. Butterfly and Pederson discuss the installations as they encounter them and the viewer feels at though they have gotten a true sense of the wonderful world of Dismal. 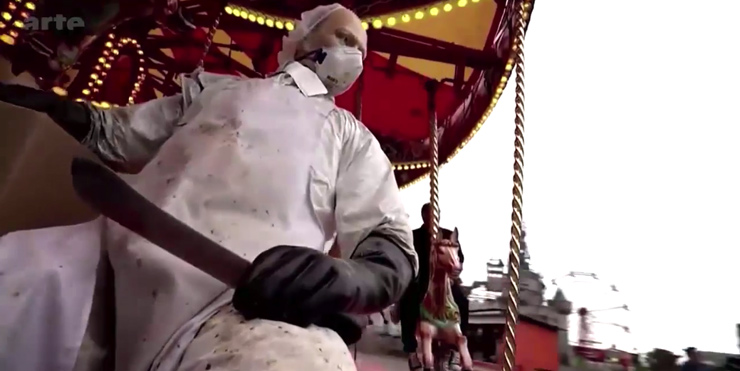 We asked Butterfly about the video and her impressions with it and she tells us that the whole Dismaland has been overwhelming for her on many levels. “From the excitement of seeing new artworks by Banksy, to discovering new artists, to confronting depressing moral issues, to having fun – for me it’s his most ambitious project to date in scale and objectives and he nailed it like no other artist.”

“Banksy’s curating role is fantastic as everything fits together as a whole, and it also highlights that consciousness on consumerism, the environment, politics is happening internationally and that everybody needs to take action,” she says.

You’ll recall that Butterfly shared her images with BSA readers in August when the show opened and gave us her review at that time, but now in retrospect, does the show hold up? “Yes,” she says, “We’ve seen previously some politically engaged artists focusing on the environment, politics etcetera, but when it is all gathered together in Dismaland the impact is “Boom!”. The messages sadly need to be reiterated because we are inundated by information / disinformation and we tend to become oblivious. 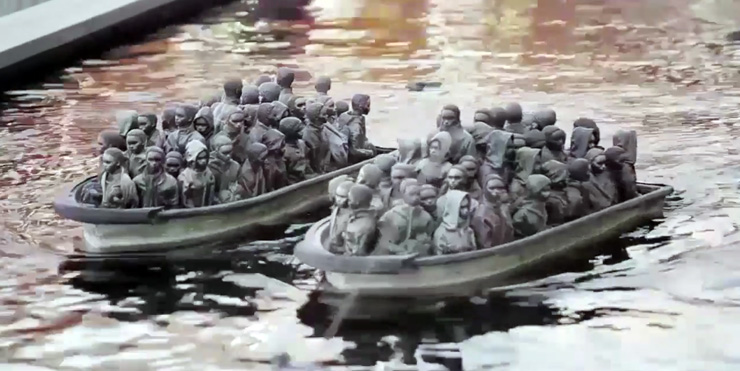 The most impactful of the installations for her was the one depicting immigrants attempting to escape to a better part of the world and the tragedies of families broken apart, some killed in the process. “It was very moving and disturbing to see the “Mediterranean Ride’ installation,” she says, “the migrant boats with floating corpses in the sea where the public could navigate the boats, but the boats never reached the shore.”

Butterfly summarizes the event like this, “Being able to make contemporary art accessible to everyone in a family-friendly setting, with an interactive element where the audience is an integrated part into the show, where guests are entertained and at the same time everybody’s conscience is awakened on our society issues – it’s unprecedented.”

An unusual mural just completed by Shepard Fairey and team at the request of the mayor of Jersey City, this single image is intended to reflect the way of cultural change taking place in this city across the bay from Gotham.  Can’t help but think of natural disasters though. Of course Japanese art history is referenced here, as well as surfing culture, so we shouldn’t interpret it as a harbinger of negative things automatically. Regardless, it is very effective and the placement is primo, no?

Whole animation was spray-painted, without any computer animation. The Bullshit sign was installed by a legendary fusion artist Shalom Neuman. “