Giants Fans in Manhattan Streets (VIDEO) Weeeeeeeee are the CHAMPEEEEENSSSS

Streets in Manhattan were bloated with about a million crazy football fans this week as the Superbowl-winning New York Giants had a parade and almost everybody skipped school and work to go see their heroes. Office workers literally dumped garbage cans of shredded paper out the window en masse while fans poured into the city from every direction, including nearby states, to roar as the players rode by. Some people were well behaved, but they were hard to see or hear because of all the hooligans raising holy hell. Here’s a video taste of it –  some seriously funny sh*t. Watch out for unbridled testosterone fueled aggression, swear words and Giants inspired freestylin. NSFW, but okay for the street.

F*ck Art at Museum of Sex

Click here to read our article and interviews with the curators and some of the artists. 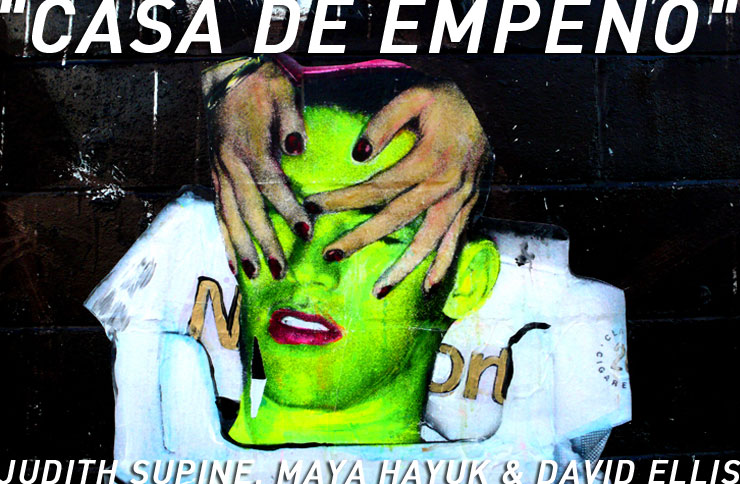 “Love & Hate” the new group show at Stolen Space Gallery in London opens today to the general public. With the participation of several Street Artists from different cities including: D*Face, Dan Witz, Miss Van, Ronzo, Toshi, Will Barras, Word To Mother, Jeff Soto and EINE among others. 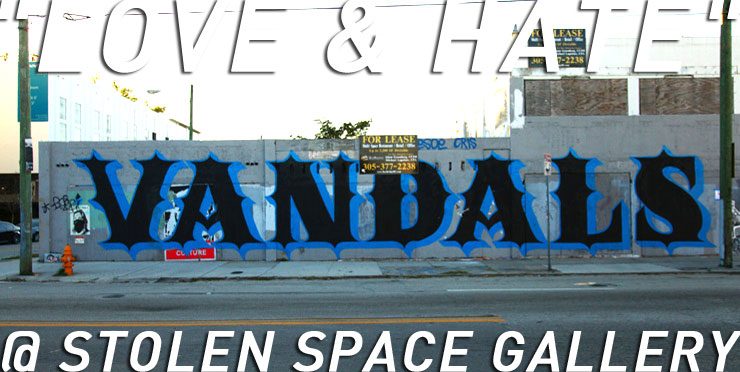 Kyle Hughes-Odgers AKA Creepy new solo show “If We Can’t Control the Boat, Let’s Control the Ocean” opens today at the Okazi Gallery in Berlin. 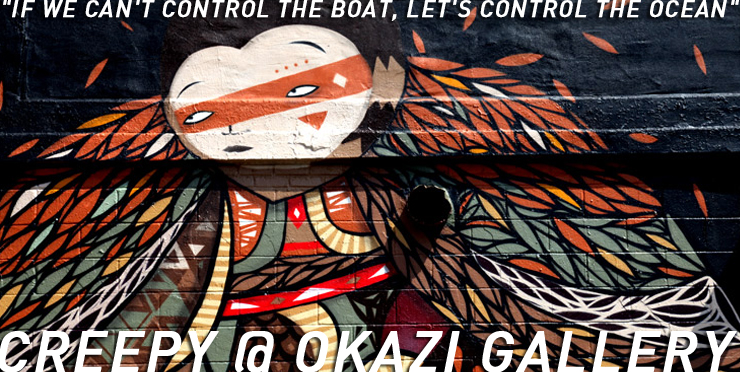 Chris Stain and Veng go to Little Venice, CA for the opening of their new show this Saturday at C.A.V.E. Gallery. 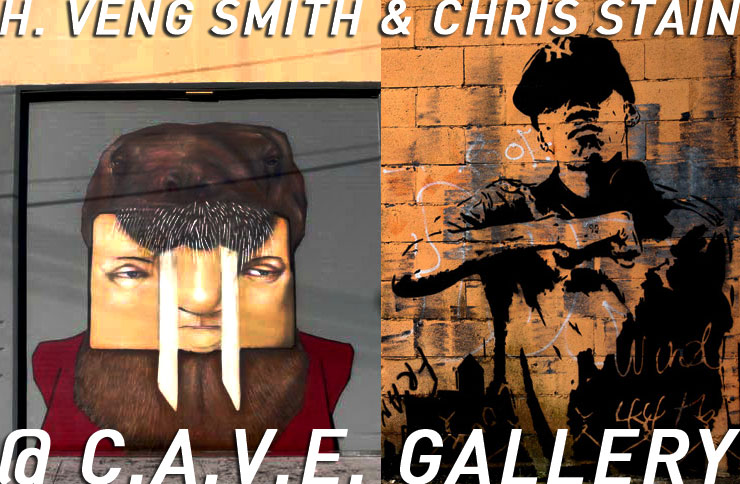 Click here to read our article on Chris’ new works for this show.

And a preview of Veng’s work on The Street Spot. 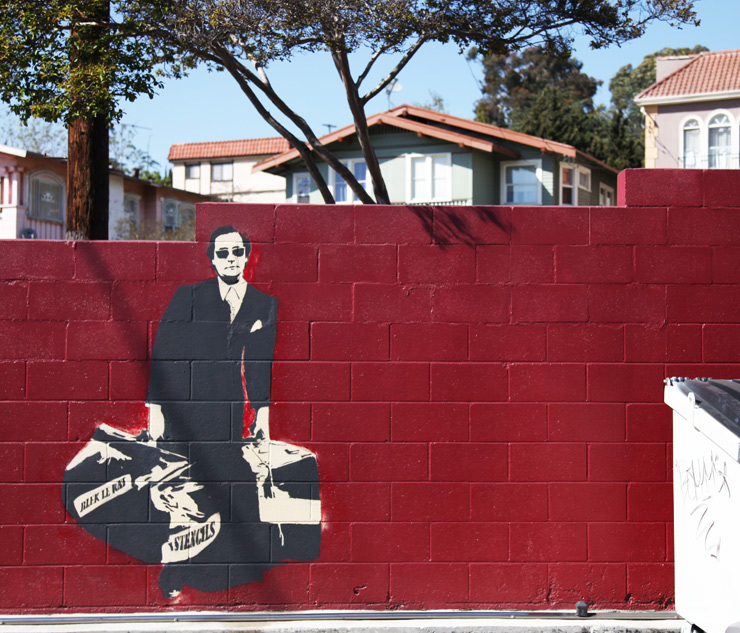 Co-curated by Emilie Baltz (Creative Director) and Mark Snyder (Director of Exhibitions), the show selects 20 current Street Artists who have pushed notions of propriety into provocation on the street and it invites them to let it loose behind closed doors.  Not that Miss Van needs anyone’s permission; her sensual role-playing painted ladies have been playfully preening on graff-piled walls and blue-boarded construction sites for much of the 2000s.  Similarly the powerfully stenciled sirens by Street Artist AIKO have been bending over in high heels on walls all over the world with just a hint of the geishas from her native Japan for over a decade.

The “Fuck Bike #001”, a pedal operated plunging machine by William Thomas Porter and Andrew H. Shirley, has at its conceptual base an ode to the lengths a guy will go to reach his natural objective. The two artist met at a Black Label Bike Club event called “Ridin’ Dirty” in 2010 and later schemed together to make an entry for a bike-themed group show in Bushwick, Brooklyn that featured many Street Artists like DarkClouds, Ellis G., UFO, Noah Sparkes and Mikey 907. “I approached Tom with the idea of creating a kinetic bike sculpture which you could f*ck someone with,” remembers Mr. Shirley, “Tom is a very gifted artist and bike engineer, it took a few days for him to build our design.”

Visitors to the show are invited to mount the bike and take it for a spin. “This bike is more sculpture oriented, but still functions sexually. It’s also totally interactive,” explains Mr. Shirley, who has displayed the bike in cities in Europe and America, most recently at Art Basel in Miami in December. So the bike has gotten around and Shirley happily recounts stories of intimate encounters it has had with both genders. (See the very Not-Safe-For-Work film of the bike in action below.)

The street has certainly seen an increase of fairly graphic sex related Street Art in the last decade or so as people have become more comfortable with such themes and much of this show can often be seen throughout the city without the price of admission. Gay couple Bryan Raughton and Nathan Vincent have been putting large and small scaled paste-ups of sexually themed imagery as a Street Art duo called RTTP for about two years on Manhattan’s Lower East Side and in Williamsburg, Brooklyn. Short for “Reply To This Post”, the line-drawn torsos and spread eagles are all part of their collaborative Street Art project that explores the desires of men seeking men on Craigslist.

Describing the work, Vincent says it’s a process of lifting the mystery off of a just-below-the-radar Internet dating game – and pasting it on a lightpole. “Users post an ad with an image, title, and a short description of what they are looking for tonight. The photograph they post of themselves is drawn and titled with the ad’s title.” By putting these erotically based desires on the streets, Vincent thinks “they magnify those desires that often seem to live at the edges.” Says Raughton of the project, “We see it as an interesting way to take people private desires to the public street.”

In discussing the origins and underpinnings of a show like this, the co-curators reveal a more academic and sociological grounding than the prurient and salacious sauciness one might infer by a display of so much “F*ck Art”.  We asked Baltz to give us a sense of the context for a Street Art driven sex show.

Brooklyn Street Art: What is your favorite part of curating a show like this?
Emilie Baltz: Seeing the different interpretations and energy that each artist brings to their work is always the most interesting part of curating – with this topic, especially, it’s the fact that they are all pushing the limits of their medium by creating such provocative statements.

Brooklyn Street Art: While these pieces are behind closed doors available to a certain audience, Street Artists typically put their work out in the public. Do you think the work should change depending on the audience?
Emilie Baltz: We don’t think it’s about changing the work, it’s about how the work changes the environment it lives in. Street art has a long history of revealing different perspectives on its surrounding environment and by placing this work in a museum it creates a certain energy and visual provocation that changes the relationship we traditionally have to the museum-going experience.

Brooklyn Street Art: Do you think there has been an increase in sex-related street art in recent years, and if so, why?
Emilie Baltz: There definitely is an increase in sex-related conversations in recent years. It’s not that there is more content suddenly, it’s just that culture is actually ready to start talking about it now, rather than ignore it.

Brooklyn Street Art: We have noticed that themes of sex and sexuality are often quickly destroyed on the street, while other pieces remain for months. Is this a form of selective censorship by the public?
Emilie Baltz: Street art is a dialogue. Its creation is about expression and commentary, and therefore can become a barometer of cultural consciousness (or unconsciousness). The intimate and emotional nature of sexual content can obviously elicit strong feelings in viewers, and, given that street art is an environmental medium, either you have to live with it or get rid of it. Sex walks a fine line between acceptance and rejection. Public response to this kind of art is potentially a mirror into how our society relates to the topic.

Brooklyn Street Art: What surprised you the most about putting this show together?
Emilie Baltz: The enthusiasm from the public. People are genuinely excited to talk about sex in public space and it’s an incredible honor to be able to help facilitate that discussion.

F*CK ART
A Street Art Occupation at the Museum of Sex in New York City, opens February 8 and will run through June 10, 2012.