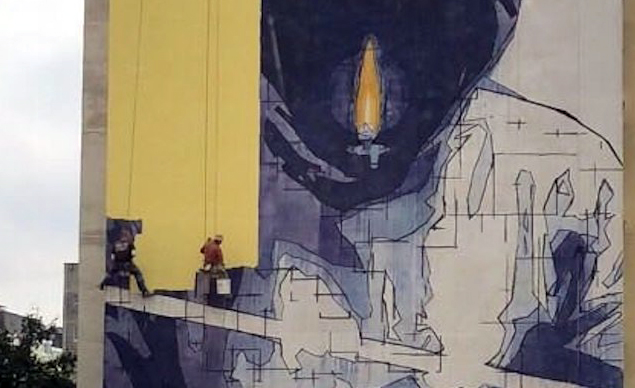 “I think it is interesting how a society reacts to an intense form of public art like this – a large scale mural with a message,” says Greek Street Artist INO when discussing the recent decision to buff his multi-story 2015 mural in Minsk, Belarus. 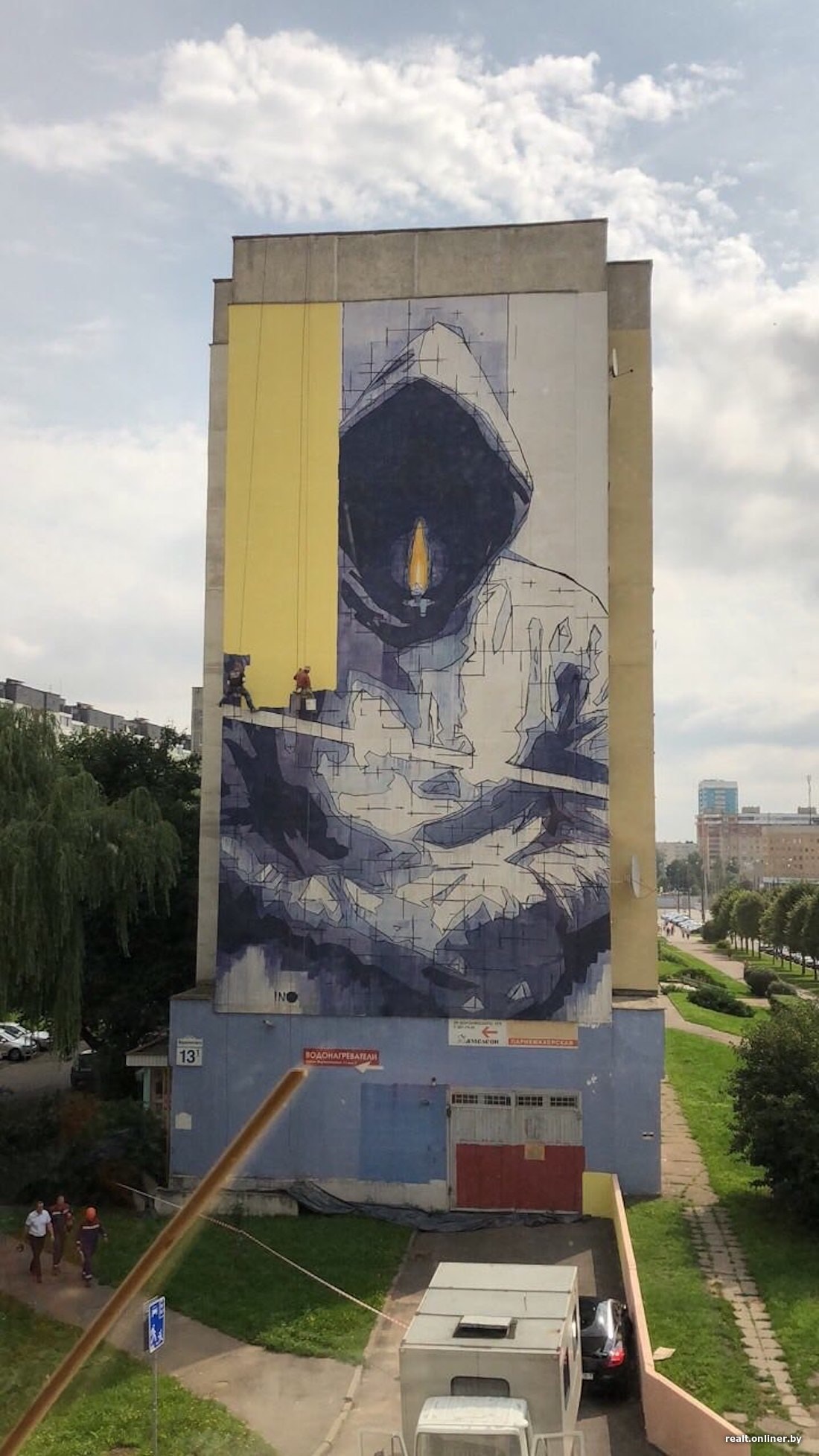 A mystery figure cloaked in a hoody with his face replaced by a burning candle flame, the image on the high-rise building on Voroniansky Street became quite recognizeable, with or without viewer’s knowledge that it was essentially a critique against the country’s death penalty. At the time he painted it with the “Urban Myths” project he said, “It is dedicated to all those who were executed and after some time, it was proved that they were innocent.”

The sentiment would not have been explicit to the average viewer, but local website Onliner says that the eight-story piece was not accepted well by some the neighborhood, and that it even sparked petitions by those who found the mural objectionable, as well as those who supported it. 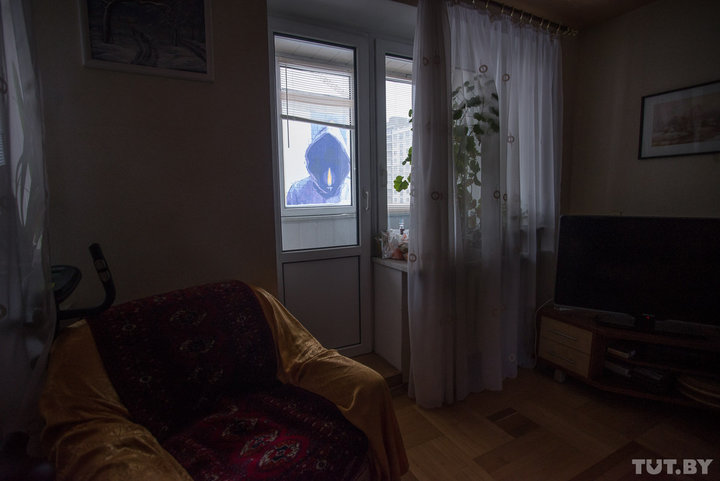 INO peaking through the curtains in Minsk. (Photo © Yevgeny Yurchak and TUT.BY)

“I know that some people have curtained their curtains with curtains – so that even accidentally their eyes don’t fall upon a ghost angel,” says a resident who lives across from it, according to our translation of the Onliner’s July 27 article about the freshly painted “Man Without a Name.”

City officials and the administration of the Oktyabrsky district have so far avoided the controversial nature of the mural, according to the artist, by focusing on a necessity to install new thermal insulation, but INO appears to doubt it. 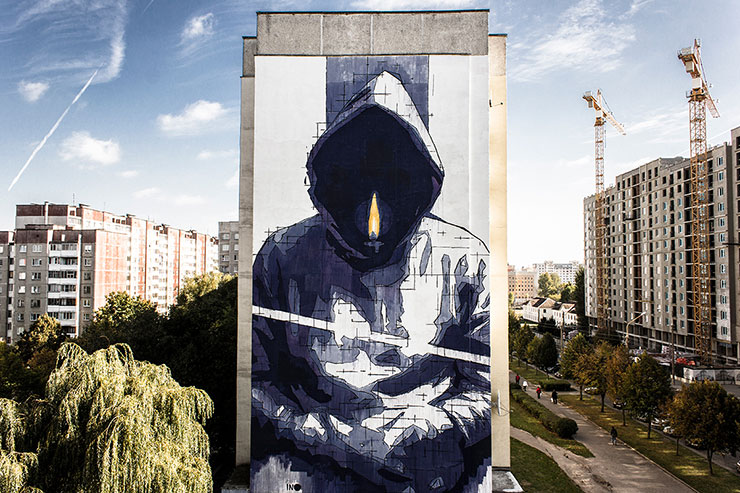 INO’s original “Man Without a Name” made the neighbors feel gloomy in Minsk. (Photo © the artist)

Many observers of the Street Art scene might suggest that a (nearly) three year “run” by a mural piece is quite respectable and the artist should be pleased, especially when you consider the nature of the illegal and ephemeral Street Art scene where a new artwork is not guaranteed to remain for even one day.

INO says he appreciates that, if this was in fact a form of censorship, it was done by official proclamation and without contentious attitude. “They were quite conservative and were fighting this in such a diplomatic way.”

Only a day after the piece was buffed, the local paper took a rather lighthearted approach by publishing Photoshopped options to replace the mural, which they dubbed “Angel of Death”. One suggestion from readers was for a mural of The Simpsons and the exhortation to “Be Happy.” 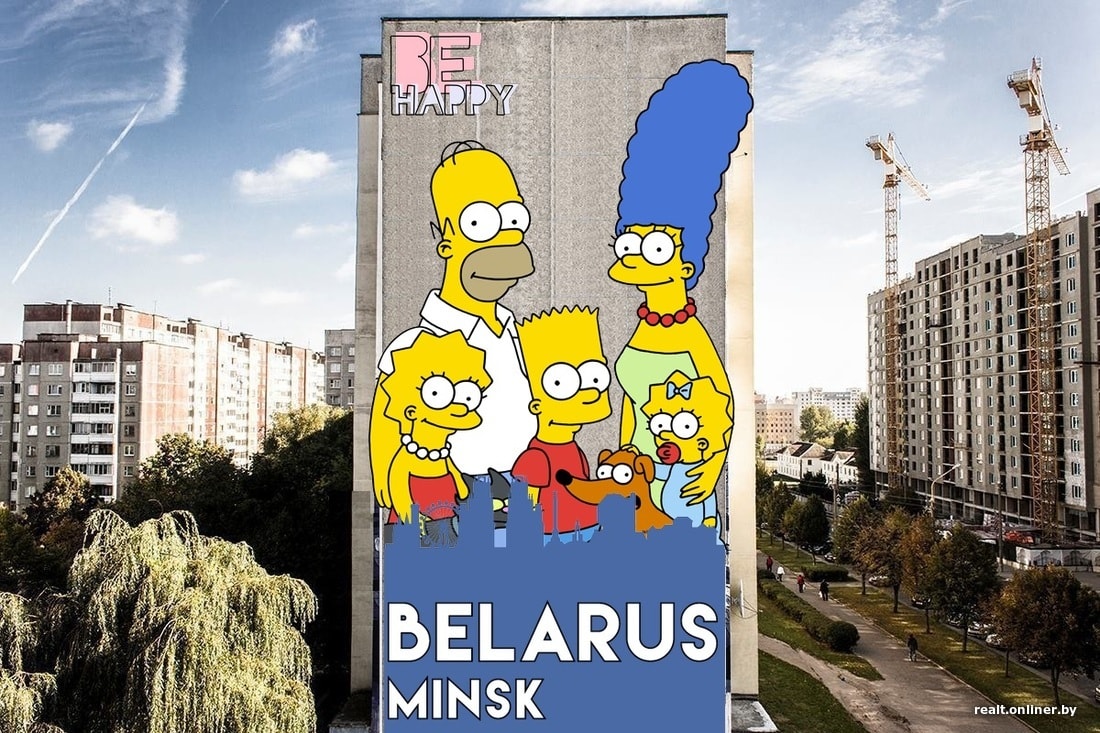 Below is a video of the original INO mural when it first appeared.