“Steve Harrington and Jaime Rojo run the Brooklyn Street Art blog, cover street art for the Huffington Post, and have had two of their books about street art published by Prestel. The duo are two of the street art community’s best-loved advocates. Some of their ideas about the internet and street art as expressed in Freed from the Wall, Street Art Travels the World, their chapter of the book Eloquent Vandals, helped to inspire this project, so I asked them some questions about street art, the internet and their work as advocates for the scene.” – So begins Chapter 2.5 of RJ Rushmore’s new online ebook that will be released Monday, and we couldn’t be prouder to be sighted as providing some inspiration for it.

A colleague with integrity from the beginning of his online presence, RJ has evolved his site Vandalog to a high degree of quality while others have languished into irrelevancy – and he’s done it by continuously looking for new ways to open the conversation with artists, writers, fans, and the occasional hot-headed “critic” or  ill-mannered commenter. Like any good Street Art/ Graffiti observer knows, a medium that began as a conversation is best served by getting more voices, not less. When he told us that he was going to expand on our 3,000 word essay and explore it further, we were excited because you can trust RJ to reliably investigate and seek and synthesize the moment that we are in because he’s done his homework.

And obviously we are not alone in that assessment since over two years of preparation RJ got some pretty heavy hitters to agree to interviews for Viral Art and the result is a colorful cross section of experts on the scene and in the street, from the past and in the very present. Take a look at the full list of interviewees at the end of this posting. 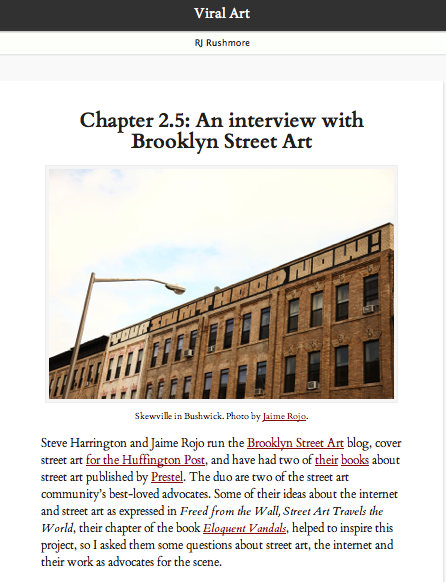 What better way to talk about the radical change wrought by the digital world on the physical Street Art world than by releasing a digital tome about the topic? Yes, we are totally prejudiced because we have way too much skin in the game and way too much love for the scene. We also worked really hard on that essay for Eloquent Vandals and were very gratified to have its essence recognized when RJ did his own review of the book in April 2011.

“Harrington and Rojo’s essay is not only the most important in the book, but one of the most important essays written about street art in this decade. They lay out what so many of us have thought about, but few have written about so eloquently and with such serious consideration: THE INTERNET IS REALLY REALLY IMPORTANT IN THE DISTRIBUTION OF CONTEMPORARY STREET ART. Sounds simple and obvious right? Well, it’s a bit more complicated than what I just wrote and the complicated aspects of this obvious fact deserve serious consideration, a conversation that Harrington and Rojo have now begun.”

Speaking of conversations, RJ has given us permission to reprint an excerpt from the interview we did with him for Viral Art below.

Before we get there, we encourage you to click on this link and show support for the project. Did we mention that it’s FREE? If you help spread the word, this conversation is only going to get wider, and you are as much a part of it as anyone.

An excerpt follows from our interview with RJ Rushmore for his book Viral Art, which also contains some images by Jaime, like this one. 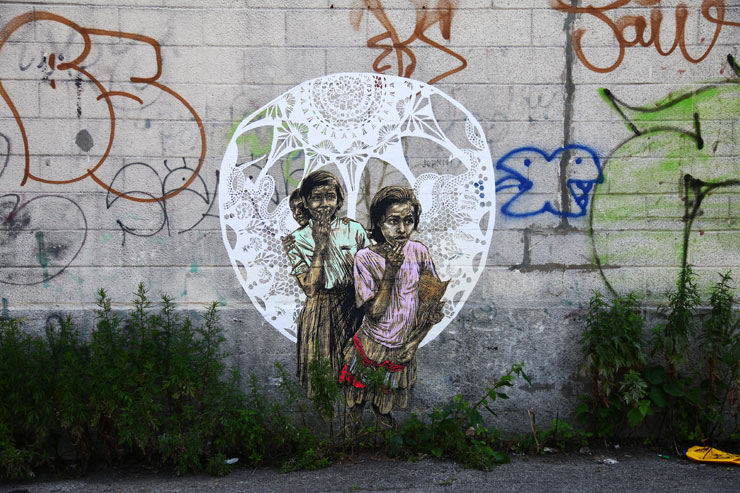 A wheatpaste by Swoon in Brooklyn. Photo by Jaime Rojo.

RJ: Why do you take photos of street art and post them online?

BSA: We think that BSA, and other sites like it, help promote the culture of art in general and we know for a fact that we have assisted many artists to get more opportunities, meet each other, meet collectors, build their practice and build an audience. We use it as a platform and as a bridge. It is also a way to bring different communities together and to tell young artists in small towns that there are other people in other parts of the globe thinking and doing the same things they are doing, feeling the same stuff they’re feeling. We’ve never found it particularly interesting or valuable to tear people down and this approach has brought a lot of like-minded people our way.

Now we take photos of Street Art and post them because we have a site that needs to be fed daily and because we see it as a mission of the site. Sharing online is a way to document this moment on the timeline of a really important explosion of the global creative culture. We think that the seeds for much of tomorrow are right here. We like to share the new ideas and proposals the artists are putting forward with our readers who otherwise would not have any other way of experience Street Art.

RJ: Do you know of any cases where posts on BSA or the Huffington Post have led to opportunities for artists?

BSA: Yes. Sometimes it’s obvious and direct, other times it’s cumulative for artists. There is now a steady stream of requests from galleries, collectors, art institutions, TV shows, magazines and newspapers that would like to work with the artists whose work we have shown and talked about on BSA or The Huffington Post. Many times we simply forward these requests to the artists and they follow up if interested. Other times we’ve given people their first time in a show, or their first interview, or introduced them to someone, which later helped them to close deals on other opportunities. Not everyone tells us that we have played a role, but we’re gratified to know that we helped many.

RJ: Can you imagine blogging about artwork on BSA if the art was intended primarily to be seen by a digital audience? Have you done so?

BSA: Perhaps this wouldn’t interest us. We have not done it before.

RJ: When did you realize that the internet was affecting street art and graffiti?

BSA: When we were doing research for our first little book; Brooklyn Street Art. We realized then that the internet was going to change the way in which artists and public experienced Street Art. Up until then we thought it was just a personal experience. Then we realized that there was an entire digital ecosystem that ever widened.

As the blog grew we gradually saw people were becoming more explicit in their contact information and sophisticated in their communications. Some Street Artists are occasionally sanctimonious about their peers dropping the name of their website on their piece, but the truth that is signing your name or your tag is equally effective thanks to powerful “search” technology. In recent years it’s been fun to see fully-formed press releases and newsletters coming from Street Artists who we’ve never once heard of assuring us they are really well known on the New York scene (or LA, Berlin, or Paris). Not that we know everybody – that would be impossible. And we all know of at least one or two Street Artists whose entire practice is predicated on how well the work has been marketed through the internet rather than the more traditional means of, say, doing cool work on the street that gets discovered.

RJ: If you were a street artist starting out in this day and age, how would you go about publicizing your work?

BSA: First, we would make sure we had actually honed some skills and developed something of relative value or to be fairly interesting. Then, we would put it up a lot. Then we would let other people know about it using all those various means that we all now know about. But the question presupposes that all Street Artists are using their work on the street for the same reason. Some are just figuring things out creatively, using the street as a sketchbook. Some are actually unaware of the “scene” and are just content to interact with the passing public. Others are just doing it on a lark, or deeply in love with somebody, or are in psychological or emotional distress.

RJ: Do you ever get contacted by artists who want you to write about their work and get the sense that they view you solely as tools to be manipulated so that they can get publicity? If so, how often and what is that like?

BSA: Yes that happens very often. We try to look at the art first and if we like what we see we give it a chance. Still we like for the artists to at least say “hello” first when they send us their work. This is a minimum courtesy, and a nice way to ask someone for a favor. Other times we have simply been ordered by someone who regards us as employees or pawns, an extension of their marketing effort or their PR machine. That’s always entertaining because we don’t make any money from our site and they obviously haven’t done their due diligence. We have our own regular jobs where we need to put up with those behaviors.

RJ: Do you prefer to look at street art in person or through photographs?

RJ: Are bloggers acting as gatekeepers for street artists in the same way that gallerists and museum directors act as gatekeepers? If so, is the gatekeeping effective or productive?

BSA: We don’t see us as gatekeepers. Bloggers and gallerists are a totally different breed. Gallerists are dealers that use the internet to make sales. They usually have a blog as a component of their gallery’s site but that’s different from a Street Art site. We share what attracts us and report on what we see in our features and editorials and interviews. The site has a calendar of events and we use it to inform the readers of shows, art events and art festivals and art fairs. We also use the site to provide free banners to causes and events that we think would benefit from our traffic when we like their mission and goals. Gate-keeping is sadly antiquated and a relic from those days of clubby academic artworld exclusivity – which no one really can respect anymore. Anyone with a computer can start a blog in about 15 minutes. Of course, not everyone has a computer, so in that way there is an element of exclusivity.

Read more of the interview On December 16th when Viral Art will be accessible for free from www.viralart.net.