As art institutions gear themselves continually to remain (or become) relevant to Gen Net patrons, all manner of incarnations will likely continue to parade before you. Yes, Picasso still draws a crowd but in the last decade, as Boomers began retiring and their media-drenched progeny grew more distracted by one million apps of eye candy, even blue chip and gray ladies of the art world started hosting DJ’s, indie bands, and endless jazz cocktails to get the booties in the house and the eyeballs off the little blue screens, if only for a second. 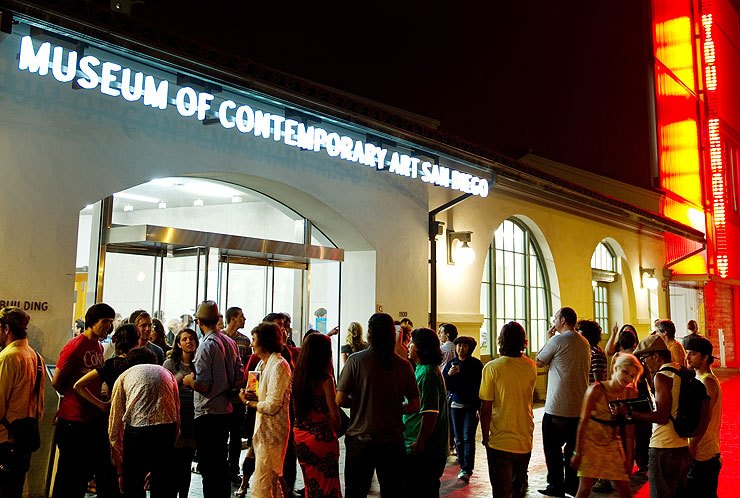 The size of the opening night crowd as well as it’s relative youth at Viva La Revolución at MCASD was a clear indicator of a much wider interest in Street Art as contemporary art than has been seen before in the US. (photo © Geoff Hargadon)

One way to make sure you are grabbing the attention of Millenials is to embrace that which they have already identified as culturally important and begin to make sense of it as it evolves.  Pedro Alonzo, guest curator of Viva La Revolución at the Museum of Contemporary Art San Diego (running until January 2) understands that a wide embrace of an evolving movement is important right now until the field winnows itself. More importantly, he recognizes that “high-minded” culturally no longer requires the confines of a museum and, along with associate curator Lucía Sanromán, he leaves the door ajar to acknowledge the continuum between street and museum in this largest exhibition of the modern global Street Art movement yet in the US.

The truth is that buck-wild artists have been making the streets a gallery in earnest for a little while now, preferring to take the more direct route to admirers and detractors alike. Billed as “a Dialogue With the Urban Landscape”, Viva goes beyond the initial infatuation with graffiti and so-called “Urban” art that institutional interests expressed in 1980s and 1990s. For some reason that new-found love eventually turned tepid and measured in the embrace.  Maybe that’s why nervous nellies in academia shuddered when the New York impresario, art dealer and gallerist Jeffrey Deitch, a champion of selected Street Artists among other vocations, was named director of Los Angeles Museum of Contemporary Art this year. Indeed a revolution of some sort is afoot. 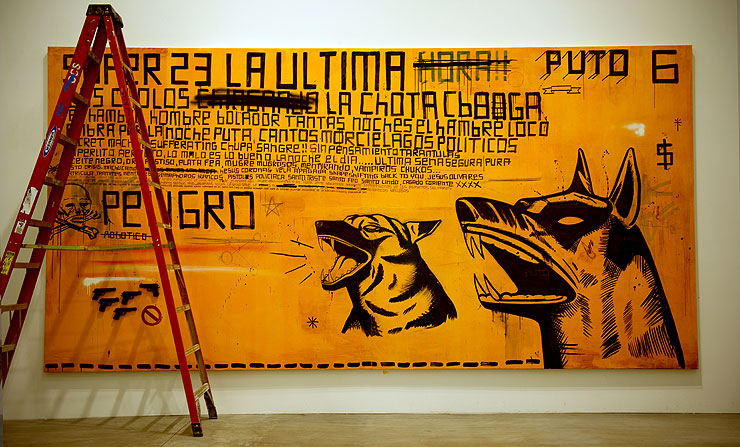 Admittedly museums must be followers as well as leaders (Guggenheim/YouTube anyone?) and the grassroots nature of this new surge of Street Artists circumvents the structures and curatorial practices of the established gallery and museum world. It also cuts across race, class and socioeconomic lines and maybe that’s part of the slow uptake. But like so many aspects of our current era, the foundations are melting before our eyes.  When you consider the democratizing force of internet/social networking communications and the fact that many of these artists come with a built-in fanbase as a result, it is a no-brainer that major and minor institutions are taking a fresh look at the new Street Art scene. 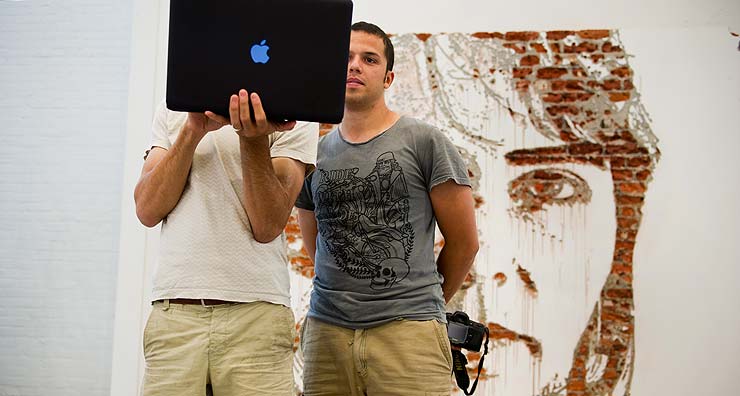 That said, Viva La Revolución is a bold undertaking that presents some of the biggest names on the scene right now and a variety of them. Under Mr. Alonzo’s guidance and audacity, it also thoroughly involves the street in the exhibition, making the city of San Diego quite literally part of the show. To pull this off and keep the respect of the artists intact is an accomplishment itself. By all accounts, he has. Having curated shows successfully including iconic street artists like Faile and last year’s Supply and Demand show by Shepard Fairey at ICA in Boston, Alonzo has easily established a rapport with a scene that is rapidly evolving.

Brooklyn Street Art: How has the response since the show opened?
Pedro Alonzo: The response has been great. The museum has had tons of calls about the exhibit and many visitors. The age of the average visitor also appears to have dropped. We are getting a younger crowd. 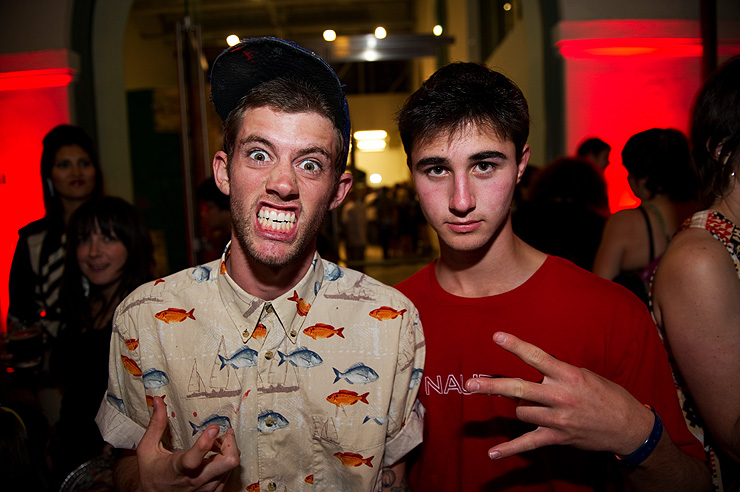 Spencer Elden, (with Shepard Fairey’s crew and famous for a nude photo in your CD collection) and Ben Logan, a volunteer who flew out from Boston to help set up the show. (photo © Geoff Hargadon)

BSA: You have a number of installations all around the city.  Was it easier to work with private owners rather than the city to secure building walls?
Pedro Alonzo: Although there have been people who work for the city who have been very supportive and instrumental in securing walls, all of the walls we used are privately owned. It was way too complicated and bureaucratic to secure city or state owned walls. 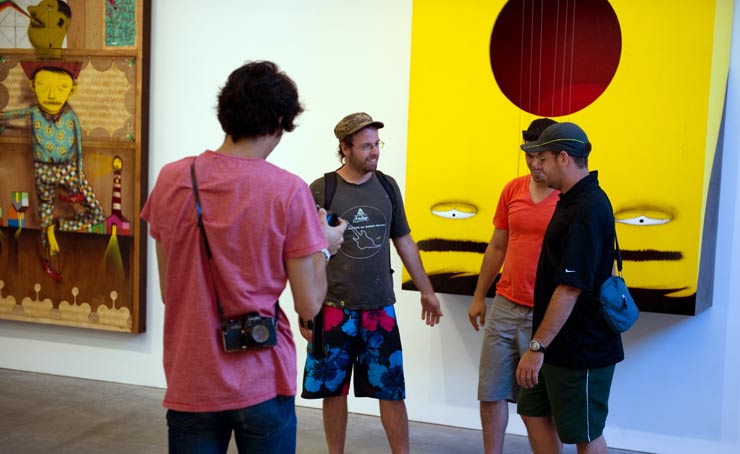 BSA: Can you talk about the name “Viva la Revolución” and it’s significance to you historically?
Pedro Alonzo: The title of the exhibition is significant on many levels, from the fact that this year marks the 100th anniversary of Mexico’s revolution to the street in Tijuana, “Avenida Revolucion” where many under age southern Californians, like myself back in high school, spent the weekends drinking and dancing. The title also refers to street art’s defiant posture towards the arts establishment in being an art that is populist, intended to be understood by most people, not just the art world elites, as well as being a form of expression that references popular and/or urban culture. This show is about an artistic revolution, art that appeals to a wider audience. 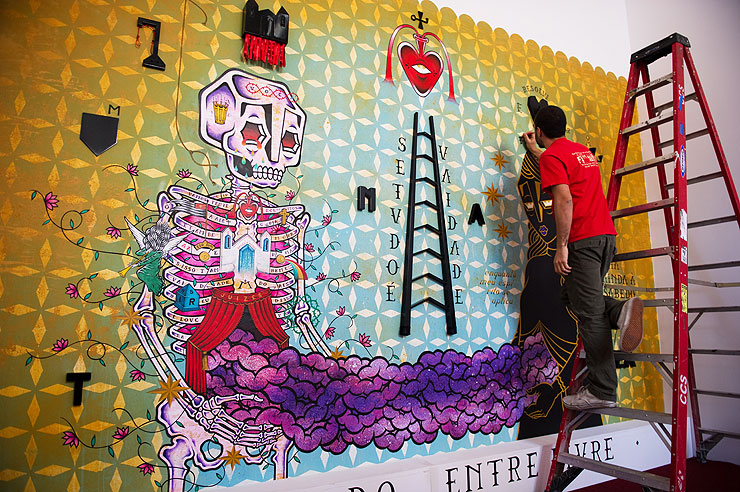 BSA: Experts, particularly the jaded ones, have been forecasting the death of Street Art periodically for years, yet we feel like New York has an ongoing explosion of it. Do you feel like street art is experiencing a revolution?
Pedro Alonzo: There are those who have stated that painting is dead and they were wrong. From my perspective, street art is finally being looked at by the art world. If anything the hoards of people who want to see street art are a clear indication of the vibrancy of the genre. 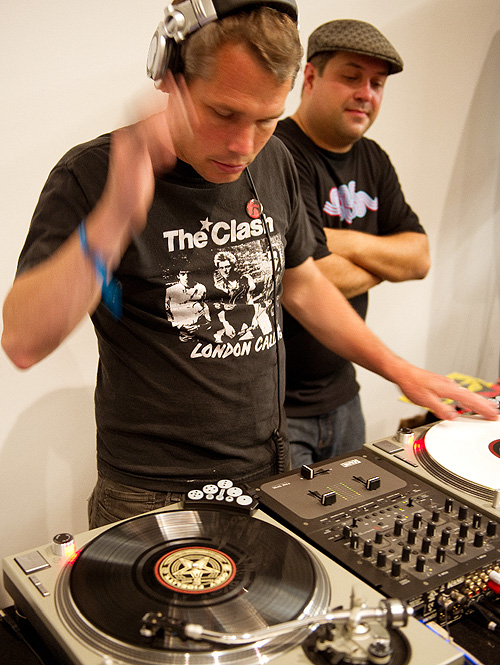 Shepard Fairey entertaining the guests at the opening (© Geoff Hargadon)

BSA: Can you talk about the street artist you have from Mexico?  Is there a Street Art movement south of the border?
Pedro Alonzo: There is definitely street art in Mexico. Stenciling and graffiti are visible in many cities. The most vibrant examples I have seen are in Oaxaca, where the art often responds to social and political issues.

BSA: What has been the most surprising part of this experience for you?
Pedro Alonzo: More than surprised, I am amazed at how quickly these artists work and adapt to the environment. Both inside the museum and on the street, the artists created amazing works for the exhibition in a very short period of time. Some of them even had time to go to the beach. We had a lot of fun. I am very proud and grateful to all of the artists for their hard work and stunning achievements. The city is responding accordingly.

In fact, the biggest surprise about the show was the response from many San Diegans of sincere gratitude at having this type of exhibition in their city. Some loved the fact that they did not have to drive to LA or fly to NYC to see it. Others felt that their interest in art was finally being acknowledged. It is a wonderful experience to have this kind of feedback in my home town. 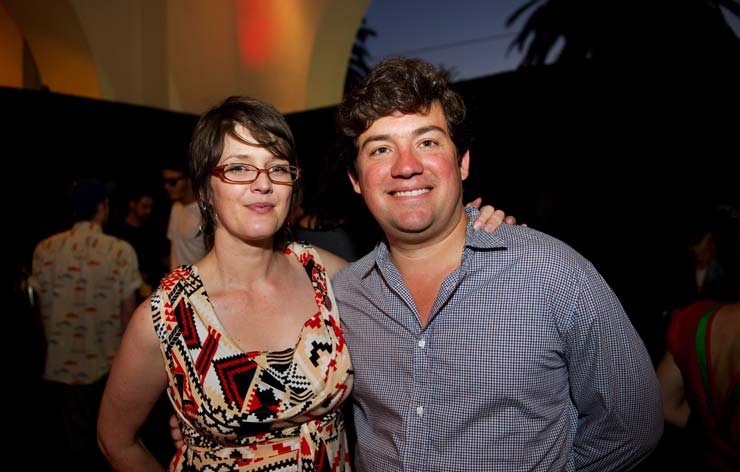 Learn more about the exhibition HERE.