Witz creates his pieces using a distinctive process; first by printing a digital photograph onto a canvas as an underpainting and then adding layers of oil paint and transparent glazes, using the techniques of the 17th century European masters. The source photos for the Park Avenue Lobby Lamp series were all taken of building lobbies on the Upper East Side near DFN Gallery. Context here becomes subtext. As seen in Park Avenue Lobby Lamps with Poinsettia, Witz’s tableaus are transformed into shrines by their own self-contained auras. Stage sets posing as intimate domestic interiors allow us to suspend disbelief long enough to enter the world of the painting. The obvious artifice of these interiors and the alluring chiaroscuro play of opposites between light and dark call to mind not only the dualities of our everyday lives vs. packaged realities, but serve the artist as “a sustaining metaphor for what it is to make paintings”. 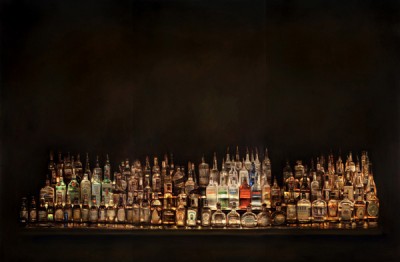 “There’s a revealing tension there – a subliminal signal of something significant, some clue to understanding our modern lives as outcasts, searching for light, and warmth, and meaning. As a kid I always sneaked over to look in the drawers of the lobby desks, hoping for some kind of sign or surprise. ” – Dan Witz

Dan Witz was born in Chicago in 1957. He studied at Rhode Island School of Design and Skowhegan School of Painting and Sculpture before graduating from Cooper Union School of Art in New York in 1980. He has had several international exhibitions and has been a grant recipient from the National Endowment for the Arts and from the New York Foundation for the Arts. Witz’s work has been featured in publications such as Time, New York andJuxtapoz. In January 2009, a monograph titled, “Dan Witz. In Plain View. 30 Years of Artworks, Illegal and Otherwise,” will be published by Gingko Press. Dan Witz is also a well known street artist, balancing his time between making paintings in his studio in Brooklyn. This is Dan Witz’s fifth solo exhibition at DFN Gallery.

DFN Gallery is now located at 74 East 79th Street (between Park & Madison Avenues)
Gallery Hours are Tuesday through Saturday 11 AM to 7 PM.
For further information please call 212-334-3400 or visit us at www.dfngallery.com

BSA Images Of The Week: 12.04.16
Of course it was not all about spectacle this week in Miami, but about tribes and community as well. Many conversations with artists on the street and at openings revolved around this chaotic/fe...
Dan Witz is Doing Dark Things in West Hollywood
You’ve walked by his work a hundred times on the street in plain view.  No really, you probably have, and didn’t know it.  Dan Witz specializes in detailed work that when fully realized, can be be e...
Images of the Week: 02.26.12
Our weekly interview with the street, this week featuring AVOID, Boxpark, Dan Witz, Gilf!, Jaye Moon, Kosbe, Love Me, bunny M, Power Revolution, Pure Evil, Rae, and some new stuff in London from gue...
"Beyond The Streets" Comes To Brooklyn in June
Gastman’s Massive Graffiti and Street Art Show Arrives at Epicenter. "I'm really excited to bring this show to New York,” says curator, graffiti historian and urban anthropologist Roger Gastman, “...
Images of the Week 07.17.11
Our weekly interview with the street, this week featuring Adri, Banksy, Dan Witz, Deform, Demon, Gaia, Jon Burgerman, Ludo, Nick Walker, Olek, Rambo, Slayers, and XAM with dispatches from Paris, Dub...
Dan Witz DFN Gallery