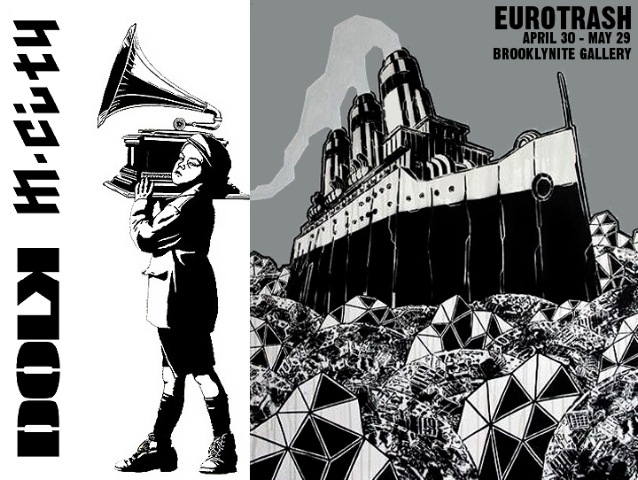 Two titans of the street art world collide when DOLK and M-CITY invade
Brooklynite Gallery for what is sure to be a show for the ages.
Reclusive, Norwegian stencil artist DOLK, emerges from the shadows to
showcase a new collection of cutting imagery. Often monochromatic with
one precisely placed color, DOLK crafts strangely beautiful story-lines
into his work, infusing a wry sense of humor into such wide ranging
topics as celebrity, religion and societal pressures. As a whole, DOLK’s
new body of work conveys a bit more cynicism than the past, with
most figures displaying enigmatic expressions as well as the inclusion
of one key prop that at times will leave you scratching your head.
However, what does remain consistent within the history of DOLK’s work
is the intrigue he manages to garner with simple, clean black lines and
spot-on subjects.
Look closely at a satellite picture of the earth and you just might see
an M-CITY mural. Listen to the echoing sounds of metal forging, pistons
firing, and air compression as M-CITY, Poland’s most prolific artist
working in the public space, erects yet another large scale mural on any
number of continents. Using his graphic brand of stencil artillery that
includes images of smoke-stack factories, cogs and gears, steam ships,
and repetitive city blocks, M-CITY redefines the Industrial Revolution.
That same crushing imagery is transferred seamlessly to his deliberate,
grey-scale canvases which could easily be passed off as Cold War
propaganda.
Thank heavens half the space at Brooklynite Gallery is outdoors —quite
conducive for these two addicts of outdoor activity who also plan on leaving
many gifts to the people of NYC.