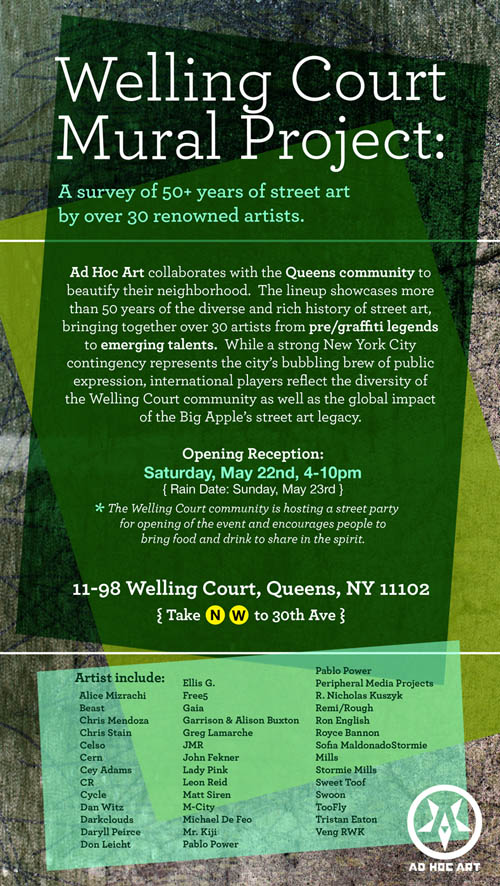 * The community is hosting an authentic NYC street party for the event. If you plan on joining the celebration, come on down with your favorite food, beverage, or street party fixins to share.

There’s never too much of a good thing

The project represents a great pairing of individuals and groups interested in making their communities and the world a more engaged and creative place. Members of the Welling Court neighborhood in Queens wanted to beautify their neighborhood walls and enliven their surroundings and Brooklyn’s Ad Hoc Art, an arts organization known for supporting and expanding the accessibility of street art to the masses in NYC and throughout the world, was an perfect fit.

Ad Hoc’s vision was to showcase the diverse and rich history of artists driven by their passion for expression and dreams for a better world. The project’s roster represents over 50 years of the expansive and diverse history of street art, bringing together artists whose productivity spans from pre/graffiti legends to the latest movers and shakers. While a strong New York City contingency represents the city’s legacy as a bubbling brew of public expression, international players reflect the global impact of the movement that burst from the Big Apple.

The project begins at the intersection of Welling Court, 30th Avenue and 12th Street and extends north along 30th Avenue and then east along Main Avenue, across the street from the Two Coves Community Garden. The street of Welling Court is a beautiful reminder to the rich diversity that exists within New York City. The block is a melting pot representing people of African American, Greek, Peruvian, Ecuadoran, Mexican, Brazilian, Chinese, Korean, Indian, and Italian origin, to name a few.