Can you imagine that sometimes street art is actually cause for celebration? Yeah, me too. Since the two new pieces by street artist Banksy showed up in San Francisco yesterday, people are flocking to the neighborhoods they appeared in – snapping pictures, posing with them, licking them. The resulting observations are very entertaining in themselves, and even people vaguely aware of the artist’s work weigh in with authority.

The video blogger, artist, and street art fan Michael Cuffe, (founder of Warholian.com) jumped out of his sneakers when his sister Kat called him to say that she thought she just saw a Banksy in her neighborhood of Chinatown and she snapped a picture. 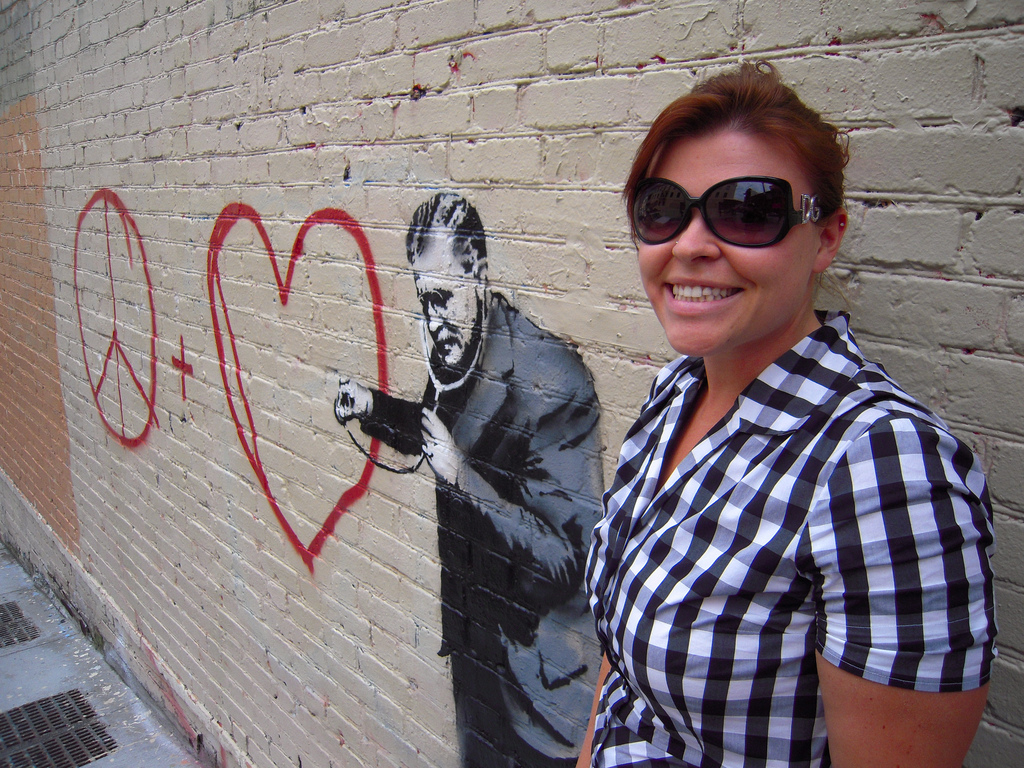 Says Cuffe, “My sister would only be calling in case of an emergency, but I was tired and was going to let it go to voicemail. She didn’t leave me one. Suddenly a text appears that says…’You’re not going to believe this, but I think I just found a Banksy.’ Not to critique my sister too much, but I figured she wouldn’t know a Banksy from a Shepard Fairey so I asked her to take a photo. She did, sent it to me, and I literally jumped out of bed throwing on whatever clothes I could find. I called her back, got the location, and said ‘HOLY SH*T, you found a F***ing Banksy!’ “

That picture was the first posted on the web, as far as we can tell, so Kat gets a prize of some sort.  Since then Michael and his team have been “burning the midnight oil” to get up a small video documentary of the new Banksy pieces that appeared in their beloved San Francisco yesterday.

Sleep deprived Cuffe, who spent 24 hours awake to capture this event and make the video, rhapsodizes about that moment he arrived to the site, “As I walked up to it in the late morning light of San Francisco’s Chinatown, it stood there alone… and it was one of the most beautiful things I’ve ever seen.”

Zio Ziegler: Primitive, Bizaare, Theatrically Punchy in San Francisco
Californian artist Zio Ziegler has a number of murals throughout San Francisco and Los Angeles - anthropomorphic figures and animals full of pattern, caught mid-action and almost exclusively in blac...
BSA's Piece on "Submerged Motherlands" Acclaimed for Year
BSA with Swoon at Brooklyn Museum Sited by Huff Post Editors as Proud Moment of 2014 We're very pleased and thankful to be included in this short list chosen by the editors of Huffington Post Arts &a...
Faith XLVII Flies Her Flags "Unbound" in San Francisco
As an artist you can sometimes address, even resolve, emotional and intellectual conflicts with your creative practice, at least that it how it appears in this new “Unbound” campaign begun by Faith XL...
Copenhagen Diary: A Street Survey of the Moment
A current survey today from the streets in Copenhagen thanks to a couple of BSA fans and friends who share with readers their recent finds in one of the world’s happiest places, according to the 2018 ...
"Banksy In New York" by Ray Mock
Ray Mock, the one man publisher who photographs, designs, and writes insightful observations of his daily Banksy revelations in his new book is no stranger to the New York graffiti and Street Art scen...
Banksy Kat Cuffe Mike Cuffe San Francisco Warholian.com