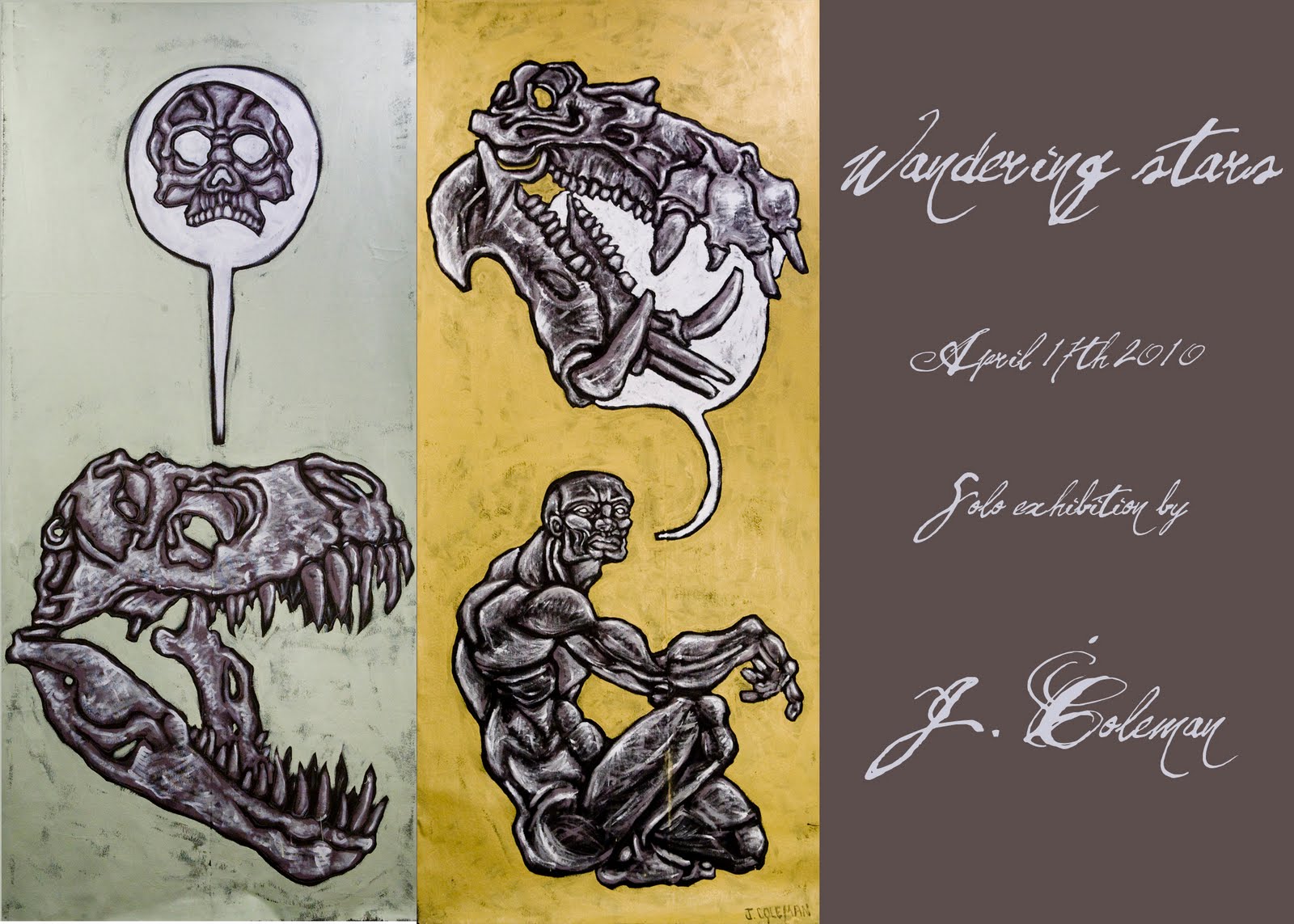 On Saturday, April 17th, Pandemic is proud to announce it’s first solo exhibition, “Wandering Stars”, featuring the work of DC based artist J. Coleman. Showing work both hung and painted directly onto the gallery walls, he creates a dialogue between both the figurative and spiritual realms. With a body of work already bursting forth with thought provoking images, he continues to embody the painterly as he transforms the walls of Pandemic into a virtual playground of deeply psychological intensity. We hope you can join us for this amazing event. Opening reception 7-11pm. 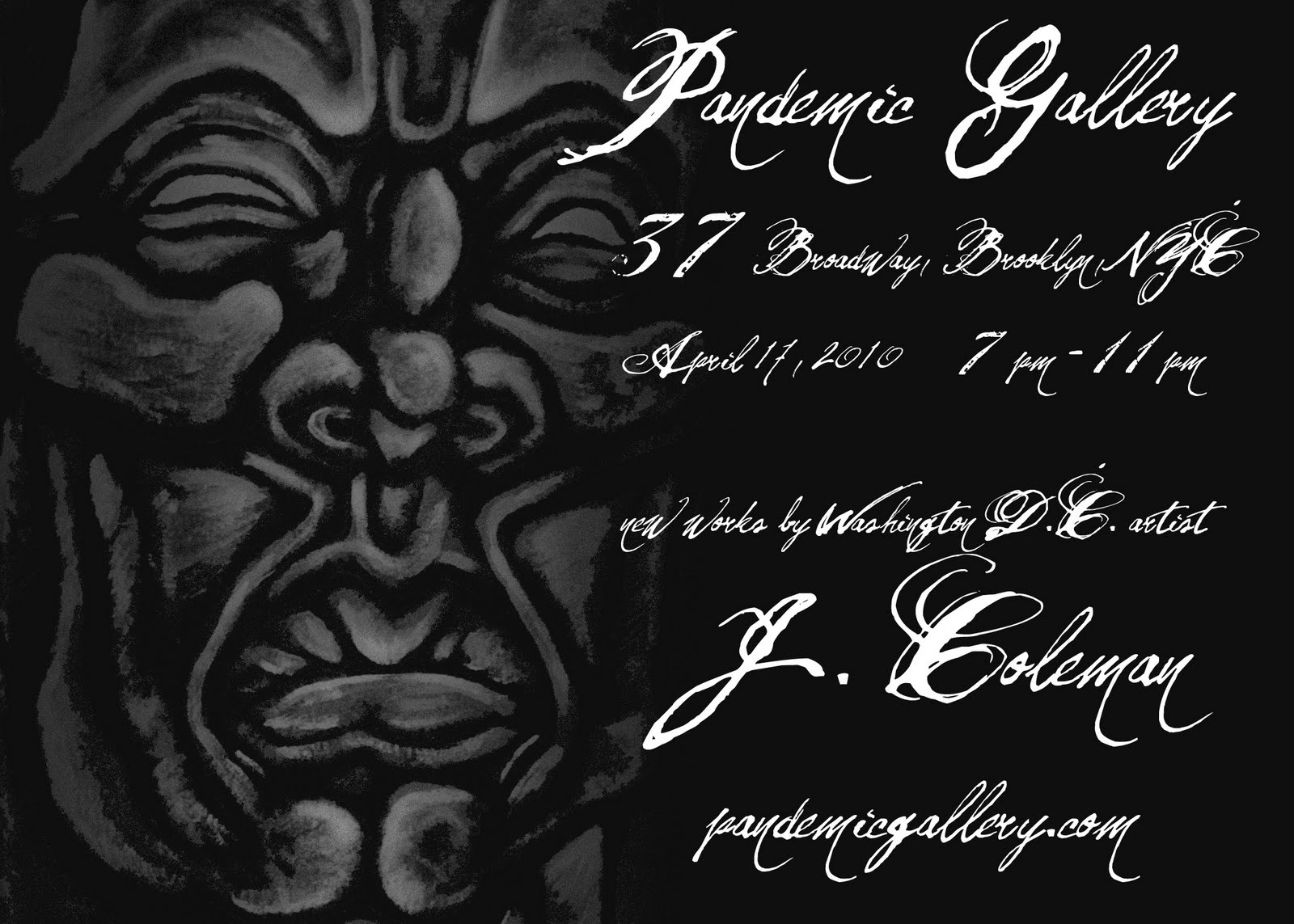 J. Coleman’s art is an art of spiritual struggle that emerges out of a deeply felt and intuitive engagement with a wide range of spiritual and philosophical traditions. Buddhism and Christianity are important sources, but so are Jungian and Freudian psychology and a host of eastern and western secular thinkers. The wide-ranging cultural sources from which Coleman’s art is drawn are filtered though a subjectivity focused on and passionately devoted to spiritual progress.  Coleman’s art is an autobiographical art of the psyche. It is an art born of suffering, emerging out of darkness, an art invested with perhaps equal measures of psychological power and metaphysical uncertainty, profound confidence and intense self doubt.

The title of this series of ten paintings, Wandering Stars, is indicative of the multivalent nature of Coleman’s artistic statement.  The title is drawn primarily from verse 13 of the General Epistle of Jude: “Raging Waves of the sea, foaming out their own shame: wandering stars, to whom is reserved the blackness of darkness forever.”   However, Coleman has also stated that the title connects to a quote from Frederich Nietzche’s Thus Spoke Zarathustra in which Zarathustra, the prophet of the overman, states “I tell you: one must still have chaos in one, to give birth to a dancing star. I tell you: you have still chaos in you.” More directly, however, the title refers to panoply of characters that enact the drama and embody the conflicting energies of Coleman’s psyche.

East of the Garden (1) is the last painting that Coleman executed in the series of 10, and although in some ways atypical, it undeniably clarifies the existential plight of all the antiheros present in the other paintings. The main protagonist is a large-scale figure whose body is schematically indicated, but whose face, back lit with radiant white light, expresses a mood of implacability and merciless justice. This figure is a powerful and aggressively masculine reinvention of one of the Cherubim’s that God placed at the Gates of Eden to keep the fallen from entering paradise ever again. The fallen in the foreground, who recoils in response to the dominating angel, has a pose that was also intended to express the Buddhist idea that freedom arises at the moment when all things are rejected. So the fate of humans, as Coleman visualizes it, is that we are simultaneously condemned and free and that our freedom is only fully realized when we renounce the paradise denied us and accept our condemnation and our relegation to the realm of suffering outside of Eden.

The condemned figure, which is gray, monochromatic and heavily muscled, exemplifies Coleman’s current figurative style which might be seen as an freely adopted expressionistically conceived version of the traditional Ecorché or skinned figures used as study models during the Renaissance and later. However, the more likely stylistic source for Coleman’s figures are those of Leon Golub, a major inspiration for Coleman’s art as a whole and the Mexican muralists who he points to as important to the development of his style.

Thrown out of paradise and denied access to regain innocence, Coleman’s Wandering Stars respond to their plight at times with courage and strength and other times with uncertainty.

Kabzeel Warrior (2) is the most direct expression of Coleman’s antihero as power figure.

The figure represented is Benaiah, son of Jehoiada, a valiant warrior from Kabzeel who is written about in the book of Samuels. The imagery in Coleman’s painting refers to the time when Benaiah chased a lion down into a pit. Then, despite the snow and slippery ground, he caught the lion and killed it. Benaiah was also the commander of King David’s bodyguards and was known for deeds of courage and strength that included killing two of Moab’s mightiest warriors. But Coleman’s references to literary sources, Biblical are otherwise, are never literal in nature. His intention is never to illustrate narrative. Rather he borrows subjects freely, selected on the basis of how well they will serve as vehicles for his expressive intention which is primarily the externalization of self as it moves, oftentimes in tortuous ways, from darkness to light.

If Kabzeel Warrior represents Coleman’s antihero at his most stalwart and confident, A New Kind of Suffering (3) represents his antihero at his most metaphysically vulnerable. Suffering here is indecisiveness itself, uncertainty about which path to follow, which voice to listen to. The figure’s body, which is awkwardly twisting and turning, as well as its dual thought projections, both effectively communicate the suffering inherent in existential man’s condition of freedom. We are free to choose alternative courses of action but never free of the necessity to make choices or of the consequences, good and bad, of the choices that we do make.

Although Coleman’s main subject is the male human figure, he does opt to externalize psychic and archetypal energies using mythic animal images or images of reptilian and animal skulls. Chimera’s Revenge (4) is the most violent painting in the series as it shows a beast at the moment of the kill. In Greek mythology, the monstrous chimera, a snake-tailed lion, revenged its homeland, Lycia, until it was slain by Bellerophon.Coleman’s chimera, at the exact moment of the kill, experiences a form of violent enlightenment, realizing its power by the projection in its consciousness of an image of the archetypical king. The best know example of the subject matter in Western art is the Chimera of Arezzo, an Etruscan bronze, discovered in 1553 and currently in the collection of Museo Archeologico Nazionale, Florence, which is a direct source for Coleman’s beast.

Fear of Being Forgotten (5) is the most pared down of the images in the series, consisting of a dinosaur skull and a thought projection of a human skull frontally placed. The stark directness of the presentation of the images gives the work a minimalist aesthetic appeal not generally characteristic of Coleman’s art. However, the bared down presentation of the images is indicative of a general direction in which his art is moving which is toward a simple, clear, economic presentation of important content. While the subject is explicitly animal and human skulls, the painting expresses a personal concern on Coleman’s part. The situation of artists today, is a tentative one, continually threatened by anonymity and public indifference.

The other works in the series, Illusion of Control, Detached Thoughts on the Rearing Beast, Bare Knuckles to a Knife Fight, Their Words Were so Concrete and Complications of Awareness are each imagistically distinct and are demonstrative of the richness of Coleman’s imagination as he devises varied imagistic formulations to express a consistent underlying vision of the human condition.

“Wandering Stars” is a series of highly original paintings that manifest the creative evolution of an artistic sensibility deeply committed to the non-visible but crucial realms of psychological and spiritual experience.

You can view more work from the artist here: