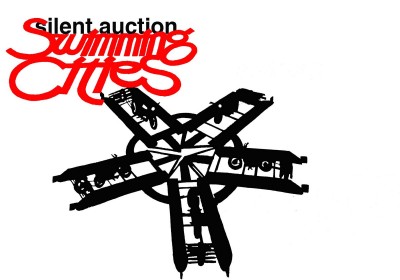 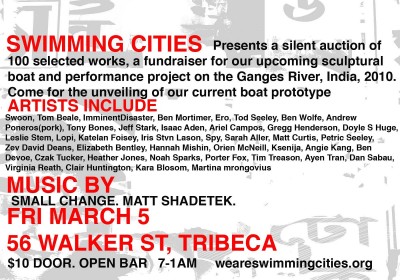 We will be unveiling a 18′ x 8′ hand crafted stainless steel catamaran
powered by a motorcycle driven paddle wheel, and help us raise money
for the remaining four. To read more about Swimming Cities and the new
Ocean of Blood Project in India scroll to the bottom or check out:

SWIMMING CITIES is a diverse group of artists, builders, and
performers who come together each year and embark on a challenging
large-scale project. Originally united through the international
artist Swoon, the group traces its roots to the DIY raft project on
the Mississippi River, the “Miss Rockaway Armada.” Taking a new
waterway each year our projects create a vivid community of artists
floating into towns to present an interactive environment which
encompasses art, sculpture, music and performance. The uncommon
talents of our members interact in an organic design process in a
unique form of living art. Our previous projects include THE SWIMMING
CITIES OF SWITCHBACK SEA on the Hudson River for Deitch Projects and
THE SWIMMING CITIES OF SERENISSIMA across the Adriatic Sea for the
Venice Biennale.

For Swimming Cities upcoming project, they will construct a fleet of
small sculptural river craft at the foothills of the Himalayas, in a
cultural exchange with local South Asian artists and artisans. The
hand-crafted boats will traverse the Ganges River from Kanpur to the
holy city of Varanasi stopping at towns and villages along the way to
meet locals and commission crafted embellishments for the boats in the
local styles. Upon arrival in Varanasi the boats will merge together
into a great floating island stage. In collaboration with local
artists and musicians they will produce a performance inspired by
their adventure and the immense cultural history of the Ganges.