Food for Art. Art for Thought. 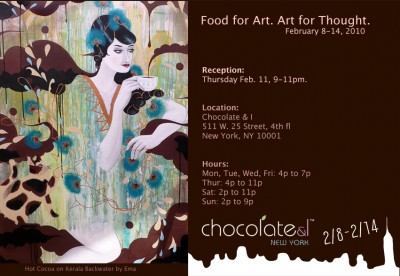 Food for Art. Art for Thought.

Chocolate & I, New York is excited to showcase recent works from both established and emerging artists revolving around the relationship and characteristics society attributes to chocolate and the way it affects us on a personal level. Join us on February 11th and view the work of Elim Chen, Ema, C&T, Jason Krugman, Michelle Mayer, Carolina Vallejo, Asli Sevinc & Charnan Lewis.

Hedonistic Cloud – EMA.
For this year’s CINY, Ema will prepare a mixed media mural installation that will take you into a delicious visual exploration of her imaginary characters’ relationship to chocolate and other hedonistic practices.

Firefly, LED basket – Jason Krugman.
Firefly is a modular LED matrix that visualizes the wind. It transforms wind into a sparkling force that embeds the environment with a sense of magic. LED basket is an exploration into the possibilities of 3-dimensional electro-luminescent LED structures. The concept of LED Weaving, is a new and uncharted territory.

Conflict Confection – Michelle Mayer.
This installation will be a twist on a luxury chocolate shop. I will be making gold leafed chocolate bullets. When approaching the subject of chocolate, one of the most delectable and cherished luxury good on the planet, it is interesting to consider its origins. Chocolate’s main ingredient is the seed of the cacao tree, discovered 2,000 years ago in the tropical rainforest of Americas. Ivory Coast’s cocoa industry, the largest producer in the world accounting for 40% of world production and selling to Mars, Kraft and Nestle among others, is highly controversial. The extremely profitable cocoa fields in the region have been a major source of funding both for the rebel armies in the north and the government in the south. An investigation by anti-corruption organization Global Witness found that in the most recent conflict, the civil war of 2002, $112m was illegally diverted towards war materiel by both sides from cocoa sales. Thousands died. Global Witness further allege that the two sides in the civil war, which recently signed a peace accord and are said to be disarming, are continuing to draw profit from the sector through embezzlement and corruption. The war has undermined cocoa prices for farmers who until recently had been able to sell their beans direct to companies for a reasonable profit, but who are now reliant on buyers thanks to the destruction of he transport network, who are gouging them over prices. As a result, despite growing demand for cocoa and rising prices on world markets, farmers have been receiving less. The $1.2bn industry has also come in for fierce criticism for its child labor practices, with a recent expose by a major newspaper tracking child slaves across the continent and finding that the number of enslaved could be as high as 12,000. Food for thought.

You Will Eat My Words; A Writing Piece – Carolina Vallejo.
Chocolate is often used as antidote for sadness, loneliness and heartbreaks. When bitting a piece of good chocolate and feeling it melting in the mouth an immediate sense of relief, sexiness and seduction comes to mind. You are taken care of. Chocolate is there for you. In You will eat my words I will craft bitter chocolate pieces into words and will offer them to the public. I will be transcribing texts written by me in the past: private letters to ex-lovers, thoughts that have been cumulating years and dust on piles of notebooks. I will set an installation that will look like a desk and will carefully make a dark chocolate and sea salt mix that will become my writing material. Pieces of each text will become chocolate for others, giving that old sorrow a new life as a comforting piece to give brief and instant happiness to others. Each piece of chocolate that I will make will be carefully packed and will have a label with the date the original text was written. Suggestions on the most appropiate time to eat that particular chocolate will also be given.

Chocolate Road, Freddie Got Smallpox, Happy Accidents – Charnan Lewis. Chocolate Road, Freddie Got Smallpox, Happy Accidents – Charnan Lewis.
T. Charnan Lewis’ pointillist paintings use unusual materials to trace the changing landscape and material culture of the West. Large canvases covered in countless candy dots imagine distorted variations of pop imagery. For example, a blond character from Scooby-Doo, wrapped in a Washington Redskins blanket and suffering from smallpox, surveys the landscape in a scene that recalls classic American representations of Indians as noble savages. In such work, viewers confront the ambiguities of U.S. history, and, at the same time, experience such imagery in the unusual medium of candy, an invitation to literally consume the work. In more recent work, Styrofoam dots affixed to contact paper are colored to create landscapes. Here, the tension between the natural and the unnatural further complicate our experience of the paintings. Styrofoam is at once extremely unnatural-it is a strange, almost otherworldly, petrochemical-derived material, a trademark of the Dow chemical company-and extremely natural-we encounter it every day, and it could be considered a symbol of the mundane. The “natural” landscapes Lewis paints in Styrofoam are themselves impossible to imagine outside of our history of representing such landscapes. That is, by using pointillism, Lewis recalls the whole tradition of painters who have sought to reimagine the natural world within a frame. But by using Styrofoam, she suggests the extent to which any such representation is a product of history and culture. Ultimately, her progression from sugar to petrochemicals recalls the shifting economies of global capitalism over the past several hundred years and the resulting cultural production they have engendered.

I Need You to Need Me – Elim Chen.
I want to arise the awareness of the fact that everyone needs to feel they’ve been needed, and it’s ok to admit we’re needy sometimes. To do that, I made two “needy objects”, they need the owner’s attentions to make them work. One is an alarm clock, to stop the alarm, the owner needs to hug it. The other one is a speaker, the volume will go crazy when the owner is not around. The owner needs to pet it to make it calm down.