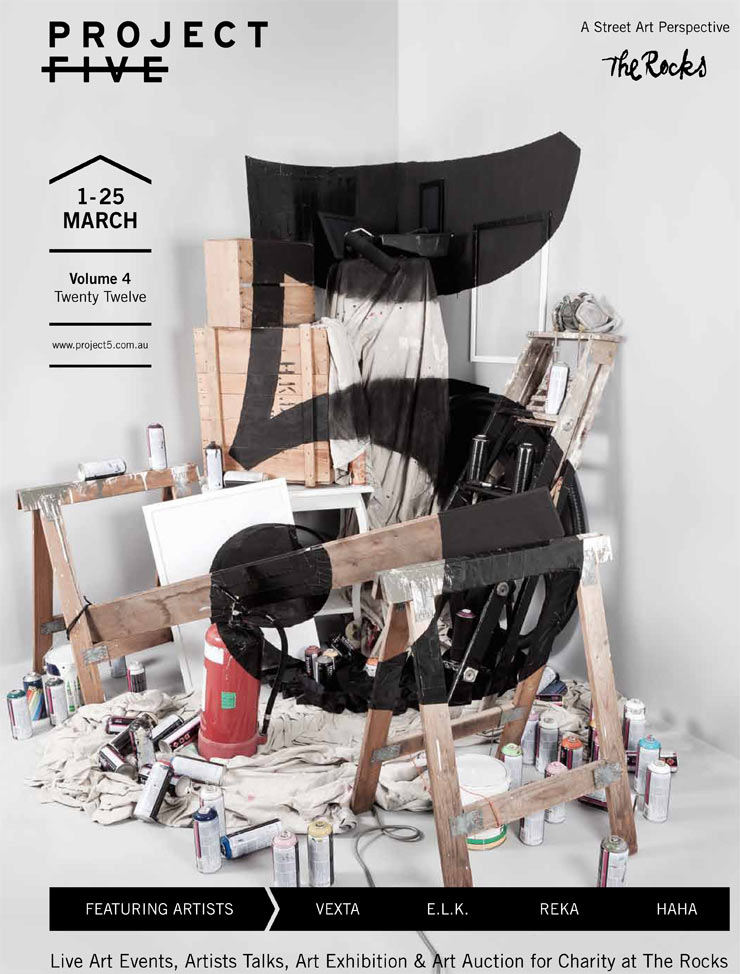 This time around, Project Five (March 1-25) is set to be bigger than ever with the launch of a new full month format that in- cludes a Retrospective Art Exhibition and Artists Talks. All events will be hosted within Sydney’s beautiful historic hub, The Rocks.

whose 10 year history of exhibiting adds punch to the line up.

Watch the artists as they draw, spray, paint and create to the sounds of the Future Classic Deejay’s who’ll be pumping beats live on the turntables for the Live Art Event.

aMBUSH Gallery’s Bill Dimas says, “Project Five is a great weekend to come and check out what street art is all about, and if you already know, then a chance to catch some of the Aussie artists leading the charge. Across three huge days we’re going to have some of Australia’s finest street artists bringing the vibrant colours and life of art to the beautiful, scenic and historically rich space The Rocks have to offer. With cranking tunes it will definitely be a weekend not to miss.”

Michael Cohen, SHFA’s Creative Producer says “The Foreshore Authority is delighted to be jumping on board with Project Five for its fourth outing and to bring it to The Rocks.

“There is a real momentum gathering around street art glob- ally and it’s getting a hold in Sydney. There is also a cultural surge happening in The Rocks at the moment, with a lot of SHFA creative initiatives, such as The Rocks Pop-Up. So it’s a natural marriage and we’re excited to support ICE and team up with the other partners.”

Project Five kicks off with the Retrospective Art Exhibition (1-25 March) giving new audiences the chance to take a look at past Project Five artists and their works, all on display at a pop up gallery at 47 George Street, The Rocks.

Audiences will get the chance to get up close and personal with the artists and their brand new works at the Artists Talks, a new addition to Project Five’s program. Jess Scully, Creative Director of Creative Sydney, part of the Vivid Sydney Festival, will lead the way as the four street artists talk through their new works and their style on Monday 12 March at 11:00 am at 47 George Street.

Project Five finishes off with the Auction Event on Thursday 22 March (6-9 pm at the foyer of Cleland Bond) led by Anne Phil- lips, head of art at Bay East Auctions.

You’ll have to wait and see what Vexta, E.L.K., James Reka and HAHA bring to the table. 100% of the proceeds will go to ICE, a charity helping disadvantaged kids in western Sydney access creative media and arts programs.

Project Five has raised over $40,000 for ICE over the previous three volumes and last year was the National Winner at the AbaF Awards winning the Australia Council Young and Emerg- ing Artists Award.

Lisa Torrance, Executive Director of ICE says “ICE’s involve- ment in Project Five has enabled us to engender some fresh creative aspirations within the communities we work with
by exposing emerging artists to new ways of expressing them- selves through street art.

“Couple this with the fact that Project Five injects vital funds into our projects and the recognition we received through an AbaF Award last year simply fuels our passion to keep building on the possibilities this wonderful initiative presents.”

Significant growth in Australia’s own street art movement both at home and abroad are further evidence of the rise of urban art. This year, Vexta, E.L.K., James Reka and HAHA are at the fore- front of the movement, and present an appealing investment opportunity for those with an eye for talent.

The Project is made possible by aMBUSH Gallery who have been exhibiting cutting edge street art for many years, and have significantly contributed to supporting new and emerg- ing local artists across Australia, and now The Rocks, who are using their resources to support Project Five as part of their investment in community and charity, and to engage visitors with something unexpected and fresh.

Based in Waterloo Sydney, aMBUSH seeks to educate and en- gage new audiences with creative exhibitions and art projects. Presenting original works created by Australia’s established and emerging street and contemporary artists, aMBUSH live up to their name by surprising or ‘ambushing’ their audiences with innovative, experimental and non-traditional shows and art proj- ects, both in and out of the gallery. These carefully developed collaborations provide artists with a powerful commercial plat- form to reach a broad audience that includes buyers, investors, creative associations, corporations, media and the wider com- munity.

In October 2011, aMBUSH Gallery were awarded the nation- al Australia Council Young and Emerging Artists Award at the 2011 Australia Business Arts Foundation Awards in Perth for excellence in developing partnerships between corporations, artists and the wider community. In January 2012, the FBi Ra- dio SMACS awards named Outpost Project as Best Art Event for 2011, awarding the joint partnership of the Sydney Harbour Federation Trust and aMBUSH Gallery.

To date, Project Five has raised over $40,000.00 for its nomi- nated charity Information and Cultural Exchange (I.C.E.) and has featured some of Australia’s best creative talent such as An- thony Lister, Kid Zoom and Ben Frost. In 2011, Project Five was the National Winner at the AbaF Awards winning the Australia Council Young and Emerging Artists Award. Now in its Fourth Volume and with a new format to include an Art Exhibition and Artist Talks, Project Five is presented by aMBUSH Gallery and Sydney Harbour Foreshore Authority at Sydney’s iconic and his- toric venue The Rocks. Also produced and curated by aMBUSH, Project Five is supported by Bay East Auctions and Information and Cultural Exchange.

ICE is a charitable community, arts and technology organisa- tion working at the frontier of digital arts to foster community creativity and empowerment in Australia’s most culturally diverse region- Western Sydney. We amplify artists’ and com- munity voices to build resilience, autonomy and infrastructure, and to enhance quality of life. ICE’s main activity is to develop programs that engage communities and cultural leaders us- ing creative practices and digital media.These programs are targeted to communities with specific needs, and focus on creative solutions to the challenges and issues they face. We are particularly known for our work in engaging, drawing out and supporting platforms that support the cultural expression and stories of culturally diverse and disadvantaged communi- ties. ICE’s programs build capacity and connections, provide

learning and participation pathways, and enable communities and artists to create and share their expressions, stories and experiences in platforms that provide them with a conduit to the world.

The Rocks is fast becoming one of Sydney’s most creative hubs. As part of Art Month NSW, Sydney Harbour Foreshore Authority is proud to co-present the award-winning arts initia- tive, Project 5.Held over 25 days in March, Sydney Harbour Foreshore Authority and Ambush gallery invite the public, and the broader arts industry, to The Rocks to experience the Project Five retrospective Art Exhibition, artist talks, a live

The Rocks has long been home to artists and designers. Today the heritage surrounds of indoor and outdoor spaces continues to provide an innovative backdrop to profile and celebrate Aus- tralia’s most recognisable and contemporary street artists; as well as to educate new audiences through stories of Australian artists and their positive contribution to our community.

Sydney Harbour Foreshore Authority owns and manages some of the State’s most significant assets, including Sydney’s heritage and cultural precincts at The Rocks and Darling Har- bour. With more than $1.2 billion in assets, and around 215 employees, the Foreshore Authority manages significant com- mercial and retail leases, provides security, cleaning, building maintenance and other facility management services, cares for the public domain and around 140 heritage items.

The Authority also operates tourism and marketing services and holds significant events in The Rocks and Darling Harbour each year. Between them, the precincts attract around 39 mil- lion visitors annually.