Thanks to everybody for the shout-outs about Fun Friday.  We love you too.

I saw her at the party/auction/fundraiser on April 24th at Factory Fresh but I didn’t know she was shooting a video!  So cool because she captured the fun crowd and the funnier DJ mixologists Sifunk and Garmunkle, who really rocked our already over stimulated brains with a rhythmic cut-copy-paste blend of funkiness. (get Paul’s New Mix FREE here) Anyway, thanks Natalie!

And on that note, thank you to all of the street artists who generously donated their time and work and creativity to the auction, which raised $16,000 for the programs at Free Arts NYC.  Thank you also to the staff and many volunteers who helped make that show work – BSA recommends these people and these programs that provide valuable services to our neighbors and to NYC kids.  A number of Street Artist already know about their programs and have volunteered as Big Brother/Sister mentors and worked with kids and families in the programs.  Here, Cynthia and Alexis talk about their experience:

This year again, Free Arts NYC has committed to serving an additional 1,000 children to meet the high demand in New York for their programs. We hope you will consider donating today by clicking here to help them reach this important milestone and close the remaining $25,000 gap needed to expand their programs.

“UR New York” Shows You How They Do It

UR New York, true born and raised New Yorkers, not transplants like most of us, are taking their street art game another step forward in a positive way. You see their cool canvasses, but do you have any idea how many steps are involved in making a print?

Here’s a studio stop-action video that shows how the New York Duo 2Easae and Ski just churned out their first print called “Arsenic” with Art Asylum Boston.  They only made 10, but it looks like a lot of effort.  Using cans and brushes, these brothers are combining the best of their experience into their work.

UR New York, Street Artist Ron English has put up a bunch of new wheat paste posters on the Welling Court Mural Project in Queens, NY. The festival starts tomorrow and already the stuff that is up is worth the trip for this community event. English is taking the opportunity to lambaste Consumerism, Greed, Militarism, Religious Hypocrisy, Romanticizing Guns, and Advertising Hammerlocks on your Head — you know, all the lite topics – with a variety of graphic lampoons a la Mad Magazine in the 70’s.ee 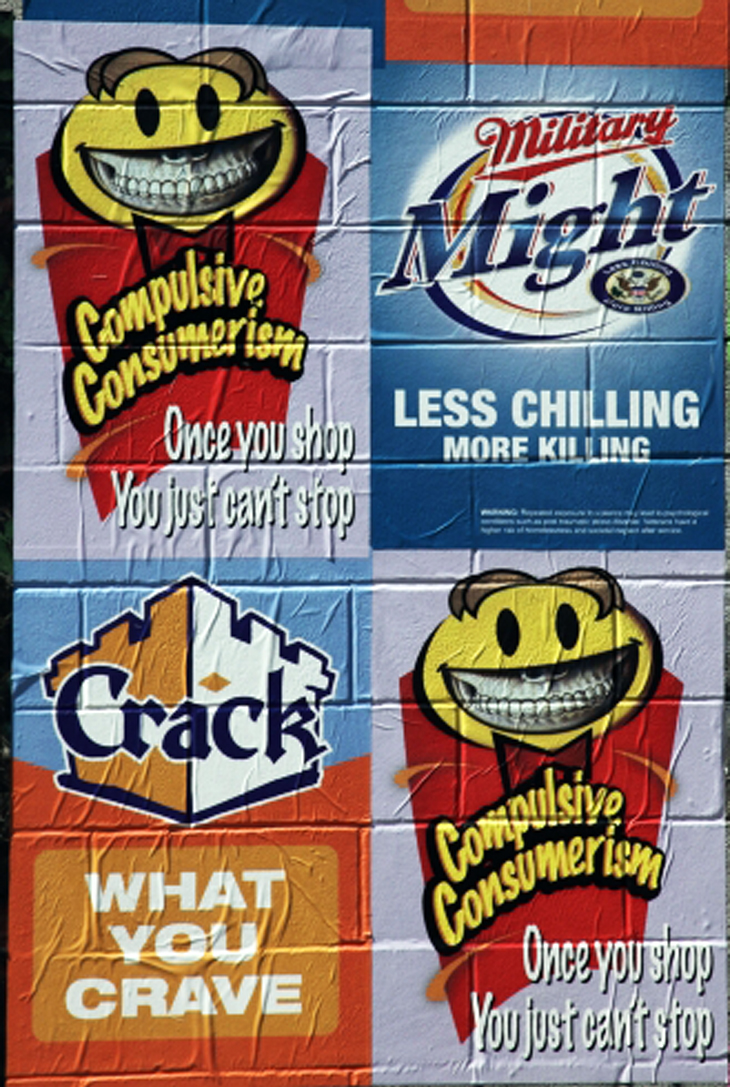 ROA on the Roof

You may have missed this, and I’m so happy with it – so that’s two really good reasons to post this new NEW YORKY video we made with ROA this week.  Have a great weekend!

With 60 artists, 73 artworks, over 500 guests, and a happy vibe created by the mad-scientists Sifunk & Garmunkle at music mission control, the Street Art New York Silent Auction Benefit for Free Arts NYC was a huge success. At the end of the night most of the walls were bare, and most of the pieces remaining had been purchased by absentee bidders. With animated conversations, excited bidding, and occasionally rambunctious dancing (Andrew), the night was really an excellent example of how the street art community is alive and well, and how the work of street artists is in demand.

Thank you to Ali and Ad at Factory Fresh for co-hosting the event, thank you to all the volunteers from Free Arts NYC who helped to hang it, pack it, and execute the auction, and special thanks to all the artists who so generously donated their pieces to the event.  Also special thanks to all the blog friends (so many!) who wrote about this event and all the people who Tweeted it continuously, as well as the print publications who helped get the word out.  We hope to thank you all personally some time, if not via email. Because of your help, the gallery and back yard were jammed with more people than anyone could remember.

Thank you to Reid Harris Cooper for sending us these pictures he took at the crowded party (we threw in a couple crowd shots from the cellphone). Reid actually scored the Blanco piece in the auction.  If anyone else has pics from that night we would love to see them.

To celebrate the release of the new book “Street Art New York” and to benefit the programs of Free Arts NYC, original artworks by a stellar array of today’s Street Artists from New York and beyond will be featured in a silent auction to take place on April 24, 2010, from 7 pm to 9:30 pm at Factory Fresh Gallery in Bushwick, Brooklyn.

The Benefit and the Artists

The Benefit, to be held at one of New York’s epicenters for the thriving new Street Art scene, Factory Fresh Gallery, will feature an incredibly strong selection of today’s Street Artists joining together for one night as a community to benefit NYC kids from disadvantaged backgrounds as the numbers of poor and low-income children in New York continues to rise. Representing a renaissance in modern urban art at the dawn of a new decade, this artists will very likely be the largest collection of 2010’s street artists in one location.

With exciting new work by 60 of today’s Street Artists

Street Art New York, by Steven P. Harrington and Jaime Rojo, with a foreword by Carolina A. Miranda, published in April 2010 by Prestel Publishing (Random House).

The authors of the successful Brooklyn Street Art book (and founders of BrooklynStreetArt.com) expand their scope and take readers on a fast-paced run through the streets of New York, along the waterways, on the rooftops, and up the walls of today’s ever-morphing vibrant Street Art scene as only NYC can tell it.

With an introduction by noted cultural journalist Carolina A. Miranda (C-Monster.net) putting Street Art in the context of the personal experience of a New Yorker, readers will be taken aback by this compelling portrait of the state of urban art featuring work on the streets of New York from 102 artists from around the world. With a collection of aproximately 200 images by exciting new comers as well as beloved “old masters” such as New Yorkers Swoon, Judith Supine, Dan Witz, Faile, Skewville, WK Interact, LA’s Sphepard Fairey, Brazil’s Os Gemeos, Ethos, Denmark’s Armsrock, France’s Space Invader, C215, Mr. Brainwash, Germany’s Herakut, Belgium’s ROA, London’s Nick Walker, Connor Harrington, and the infamous Banksy.

With its impressive list of titles in English and German, Prestel Publishing is one of the world’s leading publishers in the fields of art, architecture, photography, design, cultural history, and ethnography. The company, founded in 1924, has its headquarters in Munich, offices in New York and London, and an international sales network.

Commencing at 7 p.m. and ending at 9:30 p.m., the silent auction will be administered by Free Arts NYC, and all proceeds from the auction go directly to the non-profit. Highest bidder wins!