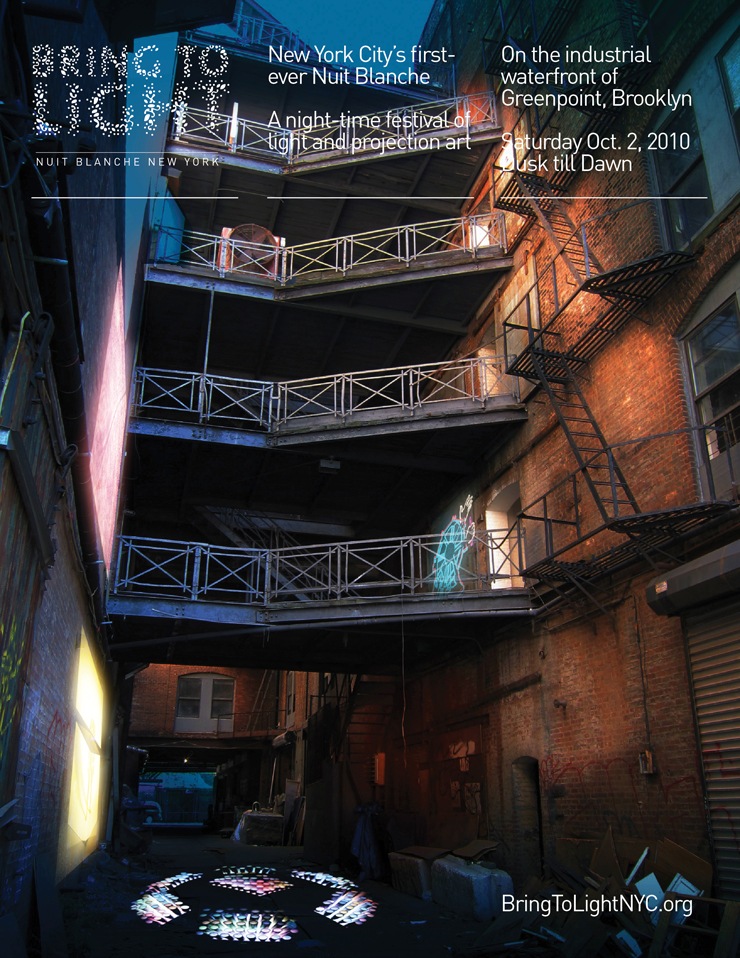 DESCRIPTION
On October 2, from sunset to dawn, the streets of Greenpoint, Brooklyn will host Bring to Light, New York City‚Äôs first Nuit Blanche, an all-night public art festival begun in 1997 in Paris, Berlin and St. Petersburg that has spread to cities across the world. The New York festival takes place on the postindustrial edges of an area reawakened in recent years by the migration of young culturistas into a mostly Polish neighborhood, and the opening of many new boutiques, bistros, bars and nightclubs. The nearby East River waterfront remains largely industrial, undeveloped, and publicly inaccessible, but for one night, the skywalks, open courtyards, alleys and adjacent streets around the Greenpoint Terminal Market will be lit up with site-specific installations, projections, interactive media, street performances, and a late-night dance party.

Bring to Light features works by over 50 international artists, performers, and musicians spread over four blocks, inhabiting street corners, galleries, shops, rooftops, vacant lots and buildings,
with opening performances on Noble Street, installations and projections inside the American Playground (on Franklin and Noble), and events hosted by neighborhood businesses including furniture company From the Source, Gym Park gymnastics center, Fowler Arts Gallery, Hollywood Stunts, and film production spaces of Seret Studios. These spaces will act as sites for light, sound and unexpected installations, performances, and projections. The event will be broadcast live during a simultaneous Nuit Blanche event in Toronto.

North Brooklyn‚Äôs growing food culture will be represented by vendors curated by the Greenpoint Food Market. In conjunction with Bring to Light, all weekend during the day, Greenpoint Open Studios, now in its second year, will offer a chance to visit the converted factories and warehouses, apartments and galleries where local artists produce artwork in all media.

ABOUT THE ORGANIZERS
This event is being organized by DoTank:Brooklyn and produced by Furnace Media in collaboration with community advocates, curators, writers, neighbors and designers. We are thrilled to bring this international tradition of a night-time arts festival to enliven public space around the Greenpoint Waterfront area, just as New Yorkers are rediscovering this historic waterfront and a burgeoning artist community is making its mark,‚Äù  said the organizers.

DoTank is a public vessel for interdisciplinary exploration, engagement and enhancement of our urban environment through means outside of the formal urban planning process. We make rapid and meaningful change by exploring and testing in our laboratory: Brooklyn, NY.

Furnace Media is a New York City based film and design company founded in 2002 as a laboratory for innovative moving image media. Our work blends live-action filmmaking, re-mixed archival footage, and 3D computer graphics for performance venues outside of traditional movie theaters often in partnership with musicians (www.liveprojections.org) or as site-specific architectural installation.

To learn more about this event and see the complete list of participating artists go to: 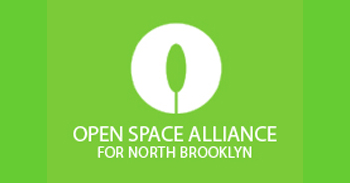 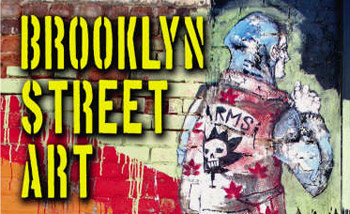