Gilf!
NOTE: THE RECEPTION FOR THIS SHOW IS PRIVATE AND RSVP IS REQUIRED TO ATTEND. 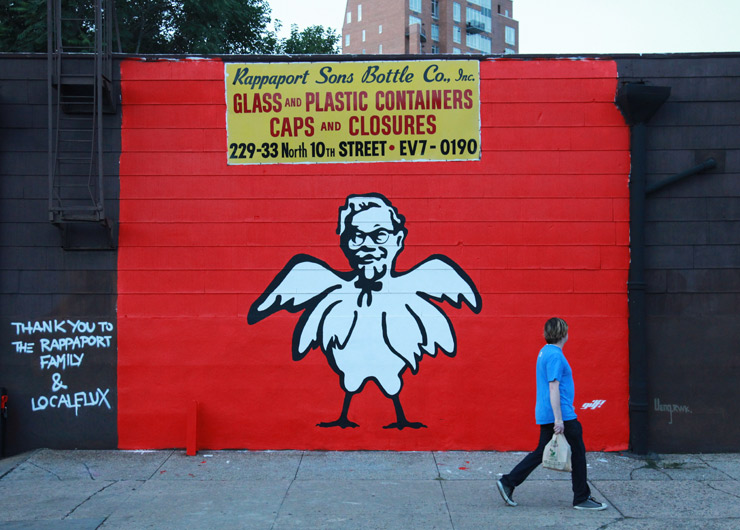 “Motivated by the idea of inspiring people I perhaps will never meet, I hope
to breathe hope into many of the issues we face as a global society.  My goal is to
create art that provokes thoughtfulness and motivates a change of the zeitgeist.” gilf!

Featured in this year’s SCOPE Art Show at Art Basel Miami Beach and New York Comedy Festival — produced by Carolines on Broadway — in association with Comedy Central. ArtScout® at

Galerie Swanström is pleased to announce a solo exhibition by (GILF!) on October 24th at the gallery from 5 to 8 PM. The private reception will include a brief Q&A with this Brooklyn-based, female street artist to discuss her inspiration, technique and new work addressing “Citizens United, and our disintegrating constitution”… explains the artist.

The artist depicts herself as The Statue of Liberty in the painting titled Oh Yeah? which discusses Americans ‘drinking the Kool-Aid’ (so to speak) as our government, corporations, and police forces may take advantage of a complacent society. The hand written text quoted in the background is taken from a speech given by Aldous Huxley in 1962.

GILF!’s paintings boldly confront challenges facing contemporary societies.
In the poignant painting titled Who’s in Control?, the letters around the dial of the birth control package — usually indicating the days of the week for each pill — have been replaced to spell: “WHY ARE CROTCHETY OLD MEN DECIDING WHAT IS RIGHT FOR WOMEN’S BODIES?” The artist uses the birth control package as a visual metaphor to call attention to the bias apparent at a Capitol Hill hearing on women’s health; an all-male panel led the hearing and no women were called to testify.

GILF!’s paintings are accessible to the new collector and directly benefit the causes she calls attention to; the artist donates a portion of each sale to not-for- profit organizations relevant to each painting’s social commentary. In doing this GILF! includes her collectors in taking actions that will facilitate change.

Banksy's "M.V. Louise Michel" at Sea Rescuing and Raising Awareness
The Bristol based street artist Banksy is again walking the fine line between activism and self-promotion, uncomfortable bedfellows at best. Sponsoring a ship "M.V. Louise Michel" to rescue refug...
BSA Film Friday 02.07.14
Our weekly focus on the moving image and art in the streets. And other oddities. Now screening : 1. Swoon Lays It On the Line 2. "Vacant View" and Baltimore's Slumlords 3. FAREWELL: In Memory ...
MARTHA: A Picture Story. Shots from the Premiere and Movie Review
First things first - Full disclosure; we are featured in the movie and we are close friends with both the subject of the doc and the director and we first suggested to the director that she was the p...
Hot Pink Flamingos in Miami with Ives One
Pink Flamingos are known as lawn ornaments, a ladies drink, and of course the classic John Waters movie. Pink Flamingos is also the name of a drag show down the strip from the 2 star hotel you flopped...
Reflecting on Acts of Art, History and Today: "Black Lives Matter" Mural in Manhattan
An outstanding and unprecedented cohesion of many communities has been on display in cities across the United States this spring and summer as “Black Lives Matter” is painted across the streets in ex...
Brooklyn Street Art Galerie Swanström Gilf Manhattan NYC