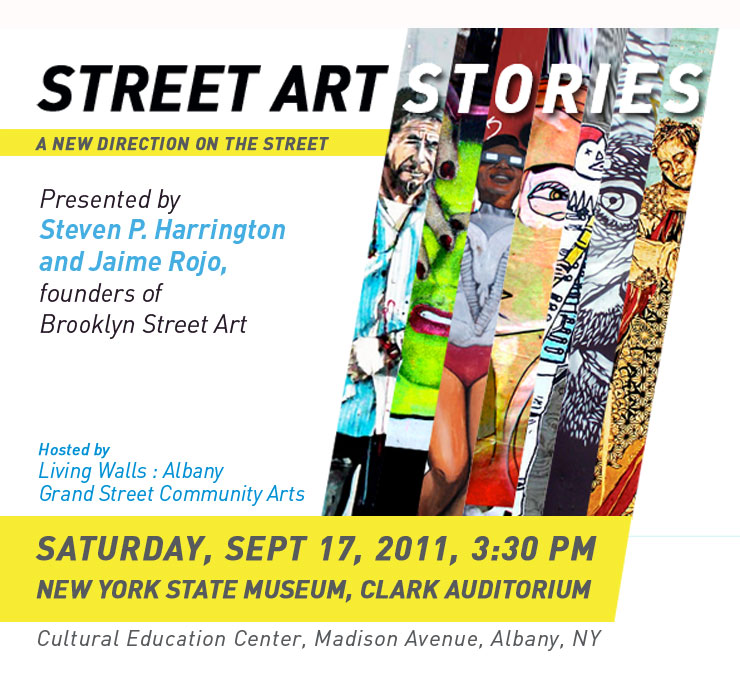 In Street Arts’ latest chapter, the storytellers are hitting up walls with all manner of influences and methods. More than ever before, formally trained and self taught fine artists are skipping the gallery route and taking their work directly to the public, creating cultural mash-ups and highly personal stories of their own, altering the character of this scene once again. Eclectic, individual, and as D.I.Y. as you can imagine, these Street Artists may have knowledge of who came before them or not, but they are determined to be a part of one art scene that is perceived as authentic, relevant, and alive.

Join Steven P. Harrington and Jaime Rojo, authors (“Brooklyn Street Art”, and “Street Art New York”, published by Prestel/Random House) and founders of Brooklyn Street Art (BrooklynStreetArt.com) and contributing Street Art writers for The Huffington Post ARTS, as they show and compare examples of work from New York’s streets today. Then join a lively discussion in a Q&A session to help explore this storytelling practice and discuss how it may be evolving what we have been calling “Street Art” for the last decade.

Urvanity Madrid Diary 1: Okuda and Bordalo II in Lavapiés
This week BSA is in Madrid to capture some highlights on the street, in studio, and at Urvanity 2019, where we are hosting a 3 day "BSA TALKS" conference called "How Deep Is the Street?" Come wit...
Bifido Says Goodbye to Sochi With a Big Gay Kiss
It was such a short affair, just one of those things. Italian Street Artist Bifido has the last word on street about the Sochi 2014 Winter Olympics with two guys in Pussy Riot ski masks and boots, an...
BSA Film Friday 12.09.16
Our weekly focus on the moving image and art in the streets. And other oddities. Now screening : 1. Mni Wiconi: The Stand At Standing Rock 2. Just Kids x Life Is Beautiful 3. "Nemco, T...
Bifido and Jacoba Niepoort "Playground Love" Under the U-Bahn
Bifido in collaboration with Jacoba Niepoort. Calle Libre Festival. Vienna, August 2019. (photo © Bifido) Just below the Vienna U-Bahn, and above the street, there are two new archangels shieldin...
F*cking REVS: Interview on BSA by Freddy Alva
“Graffiti ain’t something you do, it’s something you live,” says the text above a wildly lettered REVS piece in a 1996 photo taken in El Paso. If there is a New York graffiti/Street Art icon that you...
Albany Brooklyn Street Art Jaime Rojo Living Walls Albany New York State Museum NY Steven P. Harrington