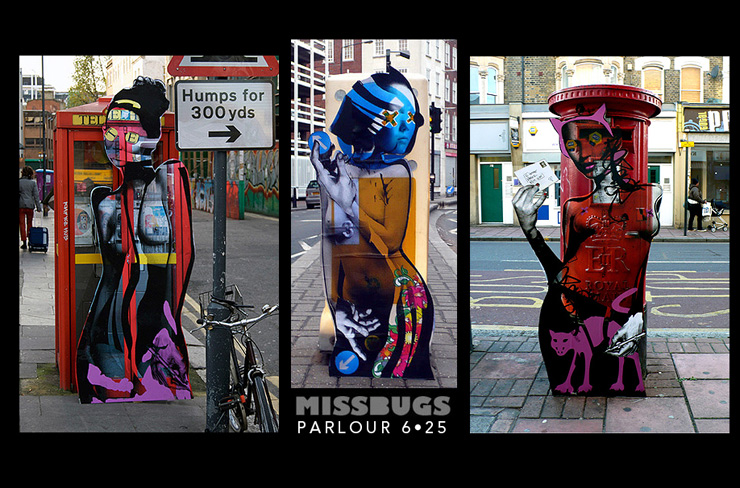 On a summers night in the heart of Brooklyn, Miss Bugs will open the
doors to her new establishment, the “Parlour”. Miss Bugs alias ‘The Madame’
welcomes you to her boudoir, fit for gods and monsters; a place where
delights and nightmares can be played out. You’ll be introduced to the
still-standing ghosts in the woodland clearing who guard the entrance to the
“Parlour” that lies beyond… Here, the Madames’ presence can be felt in
every corner; you can look directly into her eyes and view the story of her
dark desires… Madame advises all who attend the opening to dress
appropriately to honor the spirits and hide their face by donning a
masquerade mask.

“Parlour” is the setting for Miss Bugs’ new body of work; its atmosphere will
unsettle. By placing the prints and large scale collages within a fictional
space, the context of the original sources of found art is changed, making us
view its symbolism in a different, darker light. This distorted world of
installations indoors and out, is an extension of their ‘Cut Out and Fade Out’
street project and the concept of the ‘Parlour’ exploits the idea that the art
establishment plays on people’s desires, whether for money, beauty, sex or
ownership. It’s a twisted environment with poetically warped female forms that
beckon you in and carry you off to the underbelly of Miss Bugs’ soul.

The opening of ‘Parlour’ marks Miss Bugs’ second solo gallery appearance since
their debut outing over three years ago and is their first solo show outside
the UK. Miss Bugs have come together again for their most ambitious project
to-date…

They continue to explore the themes which have been prevalent in their work,
such as the nature of the art establishment. Miss Bugs continues to question
the ownership of ideas, working methods, and the relationship and knock-on
effect that artists have with one another. And while their work often sees the
appropriation of hundreds of contemporary artists; they are all referenced and
recomposed within their collages and silk-screens to make their own newly
reconstructed iconic pieces. Miss Bugs steals from many, but in doing so they
leave their own unique indelible mark; a Miss Bugs calling card at the scene of
the crime!

We are open Thursday thru Saturday from 1pm – 7pm or by appointment.
We are located 2 blocks from the A or C subway to Utica Ave. stop.