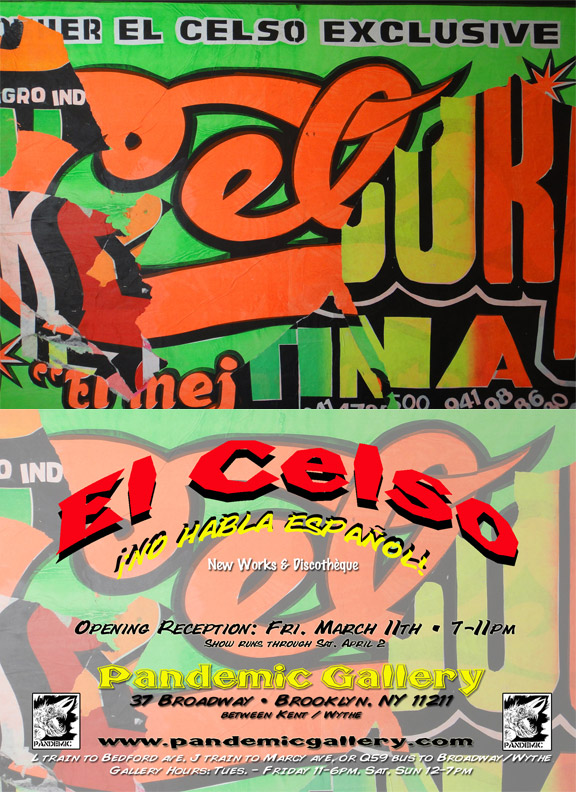 ¡NO HABLA ESPAÑOL! is El Celso’s most personal show to date. This new series of works was inspired by a recent trip to Peru where the artist became obsessed with posters made in the “chicha” style. These hand-made posters line city streets all over Peru and generally feature an eye-popping neon color palette and commercial graphics-inspired lettering. They are generally used to advertise working class concerts and other events. During a recent trip around Peru, in 2010, Celso began collecting discarded and out-of-date fragments of these posters – known as afiches chicha in Spanish – from the streets of towns such as Chachapoyas, Chiclayo, Cajamarca and Lima (to name a few).

Further inspired by their look, he established contact with the esteemed Fortunato Urcuhuaranga at Publicidad Viusa (publicidadviusa.com.pe), the print workshop that originated this iconic DayGlo look back in the 1980s. (Urcuhuaranga is a former radio DJ and he originally created these posters to advertise his station’s musical happenings.) Based on the outskirts of Lima, in the suburb of San Juan, Ate, this renowned family-run studio has produced posters for countless local Peruvian acts, as well as visual artists and arts organizations around the world.

In collaboration with the Urcuhuarangas, Celso created a series of posters inspired by the Peruvian chicha style. However Celso’s posters are a wry play on the idea of the advertisement: event posters created for non-events. Since last year, he has installed dozens of these on the streets of New York and Miami.

His exhibit and installation at the Pandemic Gallery will feature these colorful pieces, as well as fragments of the original Peruvian street posters that inspired them. Also on display will be a series of intricate collages on wood that recreate the feel of the way these posters inhabit the street. Most importantly, the show will feature a diminutive discotheque – a free-standing structure that will feature light, sound and wild graphics. All of it will serve as a tribute to contemporary Peruvian nightlife culture.

Owen Dippie "Radiant Madonna" Unites Raphael and Haring in Brooklyn
“Soooooo incredible!” says Owen Dippie about his chance to do some sight-seeing yesterday finally at the Brooklyn Museum, where they are showing the work of people he calls his heroes, including Jean-...
DAZE: "Daily Commute", Solo in NYC
Most people commute to and from work. Some spend hours caught in rush hour traffic, trapped in their cars. Others use their bikes or skateboards or a bobbing, roaring ferry. Some lucky ones just walk....
Date Farmer Carlos Ramirez Never Gives Up
“There are a lot of royalty here with all these crowns,” we observe scanning over the fresh works taped and stuck to the walls in the front room of this Brooklyn brownstone at the Bedstuy Art Residenc...
"Make It Fit" Various & Gould Join Specter at Brooklynite
Don’t try to jam these square pegs into a round hole. You’ll never make them fit. Germany’s VARIOUS & GOULD join Brooklyn’s SPECTER at Brooklynite Gallery in the workshop; an assembly-line of drill...
BSA Film Friday: 03.10.17
Our weekly focus on the moving image and art in the streets. And other oddities. Now screening : 1. Rone: The Alpha Project 2.  FKDL - Petites Chroniques Urbaines 3. Irene Lopez León: 12+1 Conto...
Brooklyn Brooklyn Sreet Art El Celso NYC Pandemic Gallery