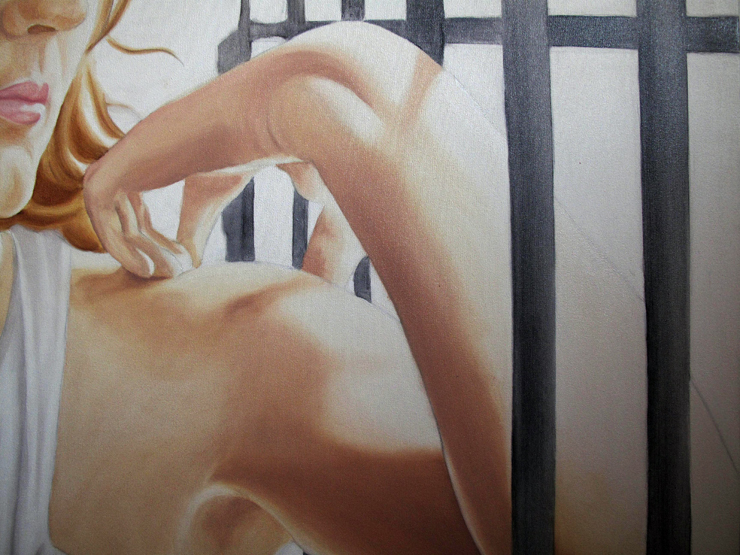 You found your wings, lift slow through charcoal skies.  Weighted, I remain.
Seven years later, I move forward, choose light.  Paint pictures not of you but for you – and even now I cannot find the words to write.  Still just a heartbeat, still just a breath away, goodbye seems too strong a word for an absence only as complete as I choose to believe.  Seven years later, I know that you would want to see me smile.

Verve Hair Lounge and Art Gallery is very excited to be showcasing the talent of urban artist Indigo in her first solo show, Towards the Light.  This talented young artist has seen much acclaim in the past year, having showcased her talent internationally in cities such as Toronto, San Francisco, London, Amsterdam, Berlin and of course her home base of Vancouver.

Known for her intricately cut and softly shaded stencils, Indigo has contributed to many beautiful and heartwarming murals at home and around the world.  Recent projects in Vancouver include the Paint Your Faith mural at Abbott and Hastings, the new Beatty Street Mural, Larger than Life at Ayden Gallery and a collaborative project at W2 Storeyum titled All Your Walls, her first foray into freehand work with spray paint.  Her hand-drawn method of stencil design has clearly developed this young artist’s eye and has made her recent evolution into other mediums seamless and strong.

Towards the Light consists of a series of oil paintings, drawings and prints that explore the experience of loss, grief, and regained hope.  It is a tribute to Jennifer Lynn Buhler, Indigo’s best friend throughout her youth, who passed away in a car crash in 2003.  All source images used in this exhibition were created in collaboration with photographer Miles de Courcy, with hair by Verve’s Amber George and makeup by Marlayna Pincott.

Love In The Time Of Corona: Pøbel
Our headline comes from adapting the title of a novel by the Nobel prize-winning Colombian author Gabriel García Márquez, replacing the infectious Corona for the infectious Cholera. In his love-trian...
Elbi Elem Breaks the Rectangle for 12+1 in Barcelona
“Break with the rectangle as the space to intervened,” says artist Elbi Elem, the March painter for this wall curated monthly in L’Hospitalet de Llobregat, Spain. The abstract muralist says she ...
Brazil's Mundano: "Operários de Brumadinho’’, Workers, and Loose Regulatory Environments / Dispatch ...
As reported this week “The Environmental Protection Agency announced a sweeping relaxation of environmental rules in response to the coronavirus pandemic, allowing power plants, factories and other f...
"Welling Court" 2014, a Grassroots Mural Event Turns 5 in Queens
When the revered graffiti holy place named 5Pointz in Queens, New York was buffed and slated officially for demolition last fall the collective response of the graffiti / Street Art fan base and commu...
MORIK Starts the 2014 Urban Forms Festival in Łódź, Poland
Urban Forms in Łódź, Poland marks year 5 and their 31st wall for the city with Russia’s Morik and iterative laying that mimics the digital art made by plan and happenstance during the day of a desig...
Brooklyn Street Art Canada Indigo Blue Vancouver Verve Hair Lounge and Gallery