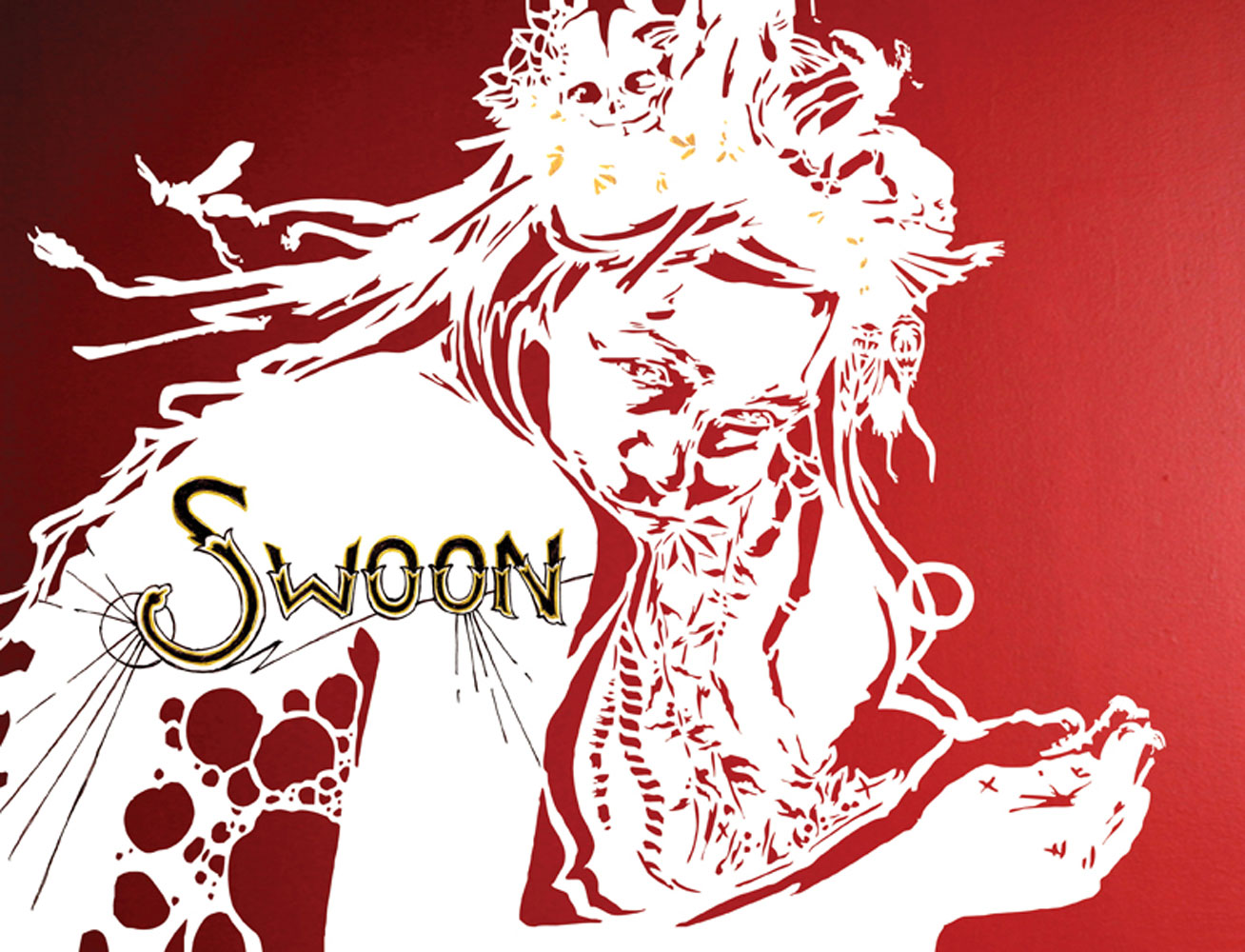 Swoon will be creating an installation with the books themselves, and they will be sold right off the wall so be sure to stop in and get an exclusive piece of this project.

This event is open to the public.

“…different than any street art I had ever seen. There was a sensitivity in the rendering

of the figure that I was astonished to see on the street. It was some of the freshest work

I had seen outside in the city since the early 1980s.”

Callie’s art…her figures walk out of the city and leap onto the walls.”

With an introduction by Jeffrey Deitch

Artist Caledonia Curry is known as Swoon to admirers who follow her work on streets and in galleries all over the world. She is perhaps best known for the life-size prints and figural paper cutouts she has pasted on walls for the past ten years, each portrait taking on a new life as it is slowly destroyed by the elements. Much of Swoon’s work is like this—beautiful and powerful, but ephemeral.

Swoon’s projects are often grand in scope, requiring weeks of preparation and huge numbers of collaborators to make them a reality. And then they disappear. Her art collective, Toyshop, was known for organizing massive street parties and demonstrations in New York City that were elaborate and dynamic, but fleeting. Her most recent focus has been on armadas of boats fashioned from scavenged junk and then launched by crews of craftsmen into the Mississippi and Hudson rivers and the Adriatic Sea.

This book captures Swoon’s work—her portraits, boats, installations, and parties—and presents them with reflections from collaborators and colleagues. Deitch Projects owner Jeffrey Deitch provides an introduction to the artist and her work, and other contributors include: culture critic and curator Carlo McCormick, Nonsense NYC founder Jeff Stark, journalist and Toyshop-member Rollo Romig, gallery owner Thomas Beale, and playwright Lisa D’Amour. Swoon herself writes the captions and the essay for her Miss Rockaway project.

As a prelude to her next project, building konbit houses in earthquake ravaged Haiti, Swoon is working with Urban Art Projects and a team of engineers and architects to produce a domed sculpture to raise awareness of the housing crisis in Haiti.  Pending NYS Parks approval, the sculpture will be exhibited in Urban Art Projects’ inaugural Williamsburg Waterfront Sculpture Exhibition in East River State Park during the month of May.   This project is also sponsored by the New York State Office of Parks, Recreation and Historic Preservation, and in addition UAP received a FY2008 Initiative Grant, and the Sponsoring Member of the local legislative initiative pursuant to which this Contract is funded is Assemblyman Joseph Lentol.

To celebrate the release of Swoon‘s new book and her project with Urban Art Projects, there will be a book-signing with the artist present at Urban Art Projects’ headquarters, located at 136 Wythe Avenue, Brooklyn, NY, on May 8th 2010 from 6 to 9 pm.

Swoon has been creating street art in New York City since 1999. She studied painting at the Pratt Institute in Brooklyn, NY, and has traveled internationally to create exhibits and host workshops. Her work can be seen at the Museum of Modern Art, the Brooklyn Museum, the Tate Modern, or on the streets of Manhattan and Brooklyn, NY.

Jeffrey Deitch is the owner of Deitch Projects in Manhattan.

Urban Art Projects is a 501(c) (3), Internal Revenue Service-recognized charitable, educational nonprofit corporation, in Brooklyn, New York. The organization was formed in 2007 to provide the organizational framework for public art exhibitions, both nationally and internationally.