See our interview with Damon Ginandes on Brooklyn Street Art 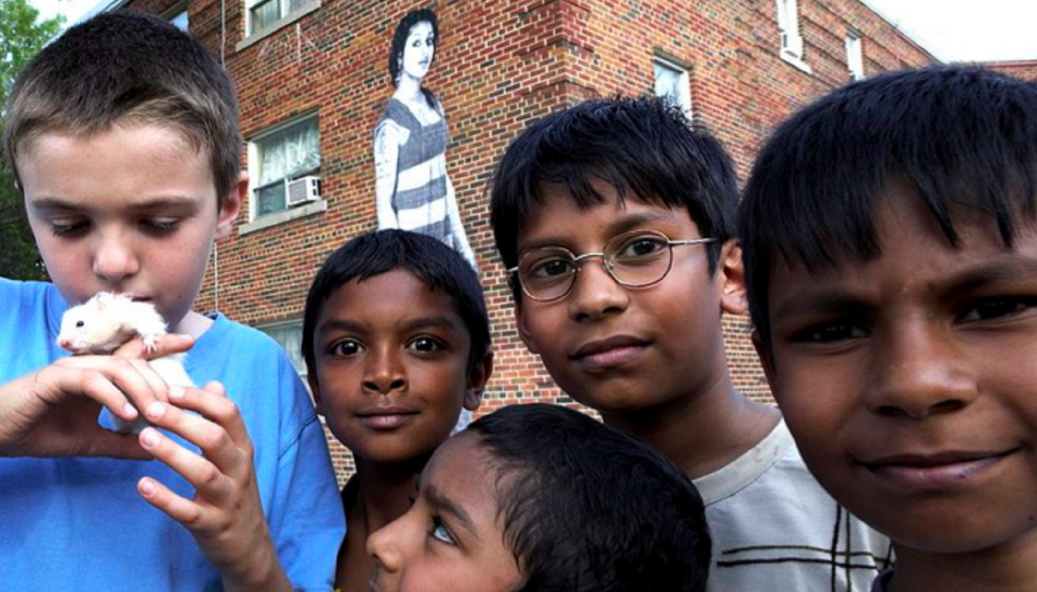 Oh My Gods, is That Thing Real? (photo Dan Bergeron)

Well known these days as a Brooklyn street artist, Fauxreel is frequently pasting his singular figures in an unexpected context, catching your attention as you pass the construction site, or abandoned doorway.  Part sociology, part dry eyed tribute, his eclectic collection of black and white portraits have a weight and a presence that may make you do a double-take; or stop and ask them what they are saying.

Lately they’ve been saying a lot, and Dan Bergeron, the artist known as Fauxreel, has been up to his elbows in buckets of sticky wheatpaste and the concept of community, as it applies to Toronto neighbors in a place called Regent Park.

Working directly with people who live there, his latest project has strengthened ties, encouraged voices, and is bringing a great deal of  attention to the displacement that can occur when the wheels of progress roll into town.  Our interview reveals an artist committed to building bridges and pushing his own creative boundaries.

Brooklyn Street Art: What’s the first thing someone needs to know about Regent Park if they come to Toronto?

Fauxreel: Regent Park is Canada’s oldest social housing project, being built in the 1940’s. It is made up of an ethnically diverse range of residents, with over 50 % of the people living there under the age of 18. Although it’s located in downtown Toronto, you most likely won’t pass through Regent Park unless you’re visiting friends and family who live there. Currently, the buildings in Regent Park are being torn down and redeveloped in smaller sections – and rightfully so as they are in ill repair – to make way for newer dwellings; much taller and mixed use, meaning lower income-geared and market rates. As the mix is changing both physically and socially, many people wonder if the same sense of community will remain after the redevelopment occurs.

Brooklyn Street Art: Many cities, including Brooklyn, have seen a rapid increase in the pace of gentrification in the last 10 years as real estate developers mow down neglected areas and build instant neighborhoods for a moneyed class.  How has Toronto been affected?

Fauxreel: Similar to Brooklyn, Toronto is in the midst of numerous housing and commercial property developments in and around the city’s core. As our society is shifting from living in suburbs, as our parent’s generation chose, to living in the city again, we’re finding the demographics of those living in the city are changing. In Toronto this has forced some people to move to different neighborhoods that are less expensive and further away from the downtown if they weren’t homeowners, or to pay a similar rent for less space.

Obviously this makes it harder for artists to find large industrial spaces for affordable rents, and it also forces out some mom and pop operations from neighborhoods because their business cannot afford the increased leases. On the other side of the coin, many people made a killing on selling their properties in the city and have more money than they ever dreamed of to build retirement properties outside of the city.

For me, what’s been most annoying or tragic is the loss of buildings, business and public spaces that I grew up frequenting and identifying with. When this happens, not only has a part of the city’s history been removed, but also part of your personal history as well.

The big mistake the city of Toronto has made during this period of growth however, is that they don’t have a design committee that oversees all of these new developments. There is no group working within the city to ensure that the architectural styles of the newer buildings reflect what already exists in that particular neighborhood. This has made for a mish-mash of buildings that form no relationship with one another and make for an uninviting landscape for the people that live and work in these environments.

Brooklyn Street Art: Is that what the Luminato Festival is about?

Fauxreel: The Luminato festival is about promoting arts and culture within Toronto for Torontonians, as well as attracting visitors to the city and showcasing Toronto as an international destination. The idea for the festival was born out of the SARS epidemic and the bad tourism rap the city received internationally due to the negative press. Fortunately for me, I was asked to be involved in one of the projects within Luminato that allowed me to deal directly with a key social issue affecting a large number of Toronto’s residents.

Brooklyn Street Art: When low-income people are displaced, where do they go?

Fauxreel: For the Regent Park redevelopment project, the residents who occupy these buildings that are being demolished are given units to live in, in one of the other Toronto Community Housing Corporation (TCHC) buildings around the city. Often this means moving to another end of the city, away from friends, church groups, changing schools and possibly further away from your job.

Valda can see you 10 blocks away so you better watch yourself.

Brooklyn Street Art: Your new project features gigantic black and white paste-ups.  Who are these people?

Fauxreel: The people that I pasted on the buildings are some of the residents of Regent Park. I wanted to choose a cross section of people based on race, ethnicity and age to provide an evenly balanced and accurate depiction of the people that live within Regent Park, although that’s very hard to do with only eleven installations.

Tyrone’s got something on his mind. (Photo by Joseph McLarty)

Brooklyn Street Art: How did you pick your subjects?  Was it hard to find willing participants?

For the most part, I hung out in Regent Park and picked people based on a gut feeling. Some of the participants came to me by way of an alliance that I made with Regent Park Focus Youth Media Centre who initially acted as a liaison between the community and me. At first people were apprehensive with what I wanted to do and what my motivations were in completing the project. But once I pasted the first image up, most people understood the scope of the project and were more than willing to participate, so much so that I have a waiting list of people who are ready to go up on the walls.

Mubusara gets ready for her closeup.

Brooklyn Street Art: In a media-soaked environment, the monstrous scale and the character of these must really jolt people out of their distracted selves for a minute.  What do you want to say to them?

Fauxreel: My hope is that through pasting the images up, people will take the time to visit Regent Park and realize that it’s not a bad place and that the people that live there are just like you and me. Everyone in the world has similar problems and for the most part we are all the same, which is why I chose to make the subjects try to appear with no pose, no smile and to look as natural as possible. That way there is no preconceived notions on behalf of the viewer in regards to what the subject is thinking or how they feel. I think this allows the viewer to see more of themselves in the subject then they normally would when people pose or put specific looks on their faces, because it’s almost as if you are looking at yourself in the mirror. People are beautiful because of who they naturally are and for the most part I like to focus my gaze on people who are not usually portrayed in the media so that the playing field is leveled out a little bit more.

Joan re-enacts the pose while Dan puts on the finishing paste.

Brooklyn Street Art: Okay, so you didn’t just climb a ladder and smack these on with a glue-stick?

Fauxreel: No. Although the idea in itself is simple – pasting paper on a wall – the time it takes to shoot, create, cut out, prepare for pasting and actually install these large, wallpaper-like images is actually quite intense and time consuming. I figured that it takes about 20 hours in total to complete one of these pieces from start to finish, which probably isn’t all that bad all things considered.

Brooklyn Street Art: This is summer intern season; were there any available?

Fauxreel: I guess it is summer intern season, however that’s never my philosophy when hiring assistants. When you’re working you should be getting paid. I’m not going to say that in all of my future endeavors I won’t have the need for the use of interns, but so far I’ve worked in such a way where the crews are smaller and the work is more intense. I would rather pay someone because then we form an agreement and the person is likely to want to be there more and work harder. Monetary incentive is a definite aphrodisiac, especially when you’re going to get dirty and sweaty for the next 12 hours.

Brooklyn Street Art: What makes this project different from what you’ve done before?

Fauxreel: The scale and the focused purpose. I’ve done projects before that I felt were important and where I felt that I challenged myself and grew as an artist, however this is the first project where I felt that the challenge that I put forth to myself in completing the project – technically, physically and mentally – was on equal footing with the affect that the project had on both the viewers and the participants.

Brooklyn Street Art: If you step back and look at your path over the last few years, where have you been going?

Fauxreel: I’ve been going exactly where I want to be going. I’m working on projects and on individual pieces that I think are not only aesthetically pleasing to the viewer, but that have some social and political commentary in them to provoke the viewer to discuss further, but not so overly socially or politically obtuse that they isolate the viewer.

Brooklyn Street Art: Would you say that this is street art with a social mission?

Fauxreel: I wouldn’t say that my work has a social mission because I don’t want to get all holier than thou. I will say though, especially like an artist like Swoon who has had a huge impact on me, I try to do work that is thoughtful in it’s preparation and presentation and that makes the audience think about something greater than what the art is on its own.

Brooklyn Street Art: How did the girl in the (shalwar kameez) head scarf react when she saw herself for the first time?

Fauxreel: The girl wearing the shalwar kameez is named Fathima Fahmy. She was very giving of herself and trusting of me. She was the first resident that was pasted up and one the reasons that the project was so successful. I owe her a great deal and I hope that I’ve done her justice in how I’ve portrayed her. When she first saw herself up, she gave me a call to thank me and told me how excited she was, which definitely made it worth it to put her up.

Brooklyn Street Art: Will you be snapping pictures as these images and buildings are being destroyed?

Fauxreel: Absolutely. Most likely I’ll do some time lapses of the buildings as they go down, which I’m sure will be quite striking. I’m looking forward to it for very selfish reasons.